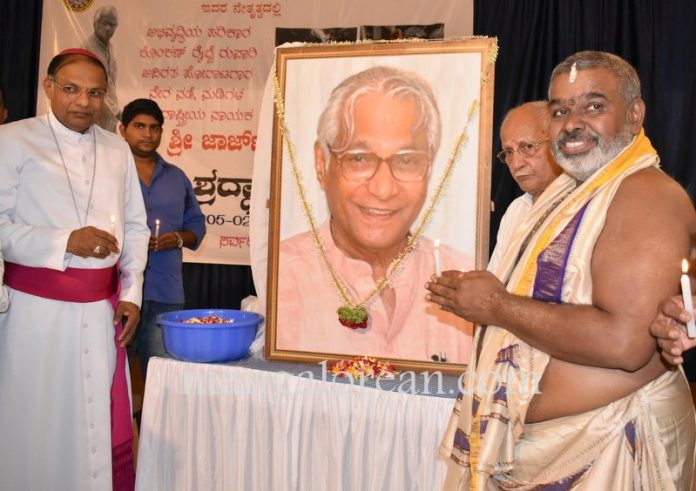 Mangaluru: Relatives, friends and well-wishers who were near and dear and also other citizens who had appreciated the contribution done to the nation by former Union Defence Minister George Fernandes, turned up in large numbers for a condolence meeting held to mark respect to the departed soul of Late George Fernandes at Bejai Church Hall, on Tuesday, 5 February at 6 pm, which was presided over by Bishop of Mangaluru Diocese Rev Dr Peter Paul Saldanha, and also joined by other dignitaries namely- MLC Ivan D’souza; Anantha Padmanabha Asranna, the priest of Durga Parameshwari Temple-Kateel; Thonse Jayakrishna Shetty- Founder President of Jayashrikrishna Parisara Premi Samit (JPPS) , Mumbai; Felix D’souza-VP of JPPS, Mumbai; Harikrishna Punaroor-Former president of Karnataka Kannada Sahitya Parishat; Pradeep Kumar Kalkura- current president of Karnataka Kannada Sahitya Parishat, among many others.

Prior to the formal function, Bishop Rev Dr Peter Paul Saldanha, along with George’s brother Michael Fernandes, George’s son Tushar, and members of Catholic Sabha paid respect with prayers near the grave of George Fernandes. The portrait of late George Fernandes was unveiled by the Bishop along with all the dignitaries, and flower petals were showered at the portrait. Lighting the candles, a two minutes silence was observed to pay respect to the departed soul of Fernandes, by the dignitaries along with the audience, backed by a prayer song rendered by the Derebail Church Choir under the leadership of Anil Patrao.

Addressing the audience Bishop Saldanha said, “George Fernandes born and brought up in Mangaluru till his young age could be hailed a true Son and Leader of this soil, having served the nation with courage, determination and dedication, and even though he spent most of his time in Mumbai and New Delhi, he had his heart close to his hometown and Mangaloreans. He had great respect and love towards Kodiyal and has helped many in their needs. His relationship with Mangaloreans was immense, that he used to make frequent visits here whenever he got a chance. And being a leader of the labourers he extended his wholehearted support to the poor and he turned out to be the voice of the poor. His life should be cherished by all of us, and make him as a role model in our lives. May His soul rest in peace”.

Kateel Temple priest Anantha Padmanabha Asranna, in his condolence message, said, “No doubt we can say that George Fernandes has become a saint, for his community service and love for the poor. For all the good work that he did during his life has earned him a holy place in peoples’ hearts, and he will never be forgotten by all those who were associated and came in contact with him. His is a life we should follow to lead a simple life and care for others. He will forever be an inspiration and role model for all of us”.

MLC Ivan D’Souza in his speech said, “I feel proud to say that George Fernandes is a son of this soil, hailing from Bejai, who brought fame and glory to this town through his dedicated service as union defense minister. His efforts in getting the Konkan Railway done needs to be appreciated, and it is befitting that Mangaluru Junction Railway Station at Kankanady be named after him. Like one reporter of daily had quoted that if George was born Hindu, he would have become the PM of India”, but unfortunately his religion couldn’t help him out in that regard. But he had love and concern to every religion and was liked by all. We need to appreciate all the good things he has done to Mangaluru, and honor him whenever we get a chance”.

Thonse Jayakrishna Shetty in his condolence speech said, “My relationship with George is like a brother to me. And I can say he is next to God, and being a good Samaritan always, he was like Jesus Christ. Just like Jesus who was nice but got betrayed and was crucified, similarly has been the life of George. Once on his birthday, George said to me, to avoid all the controversy happening in Ayodhya, why not built a Temple, and also a Mosque and a Church, so that all the tension and violence is stopped, and we all can live equally and in harmony. I had a cordial relationship with the son of our soil the most respected and Honourable Fernandes, the then Defense Minister who has always continued to support the Samiti from the day one of its inceptions has been very instrumental to the progress and success of the Samiti. For all the good work that he has done, and for introducing night-landing flights at MIA, I suggest that Mangaluru Airport be named after George Fernandes”.

Mumbai based labour leader Felix D’Souza speaking in Tulu language said “Why I have decided to speak in Tulu is only because George Fernandes loved the Tulu and he communicated in Tulu whenever he met a person from Tulunadu-Mangaluru. Such was the man, who led a very simple life, thereby winning the hearts of the labourers of Mumbai, Bihar and other parts of the nation. He will be dearly missed by these low wages people. I can say that George was a true politician, and a real fighter. Even though he is not with us anymore, but his legacy will still be in our hearts, who’ll leads us by his thoughts and deeds.”

Michael Fernandes, brother of George also spoke and gave a brief history of his long-lived life.  Celestian D’souza- VP of Catholic Sabha proposed the vote of thanks, and Francis D’cunha, Headmaster of Padua High School and member of Catholic Sabha compered the programme. A requiem mass was held this morning at 6.30 am at St Francis Xavier Church-Bejai for the departed soul of Late George Fernandes. Following the mass, Augustine Rodricks- past Vice President of Bejai Church Parish Council spoke about the service done to the community by former union minister Fernandes. George’s brother Michael extended his heartfelt thanks to everyone who attended the mass, and for showing their love and respect to his brother. Musician F M Lobo had made all the arrangements for this requiem mass.