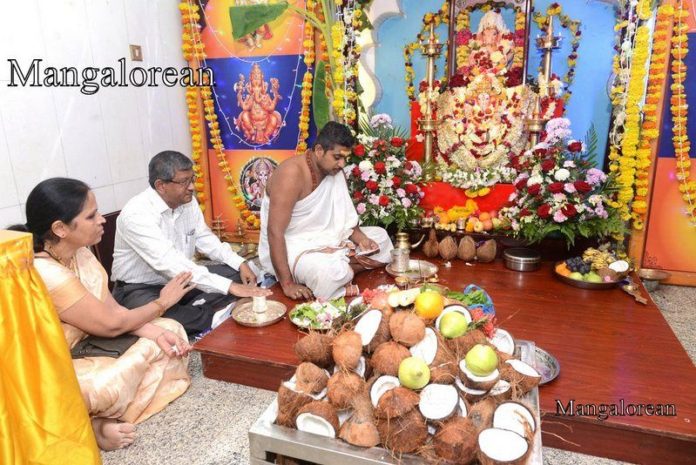 It translates as, “we invite you, Lord Ganesha, the wisest among the wise, the Lord of the Vedic mantras, who is listening to our prayers. Please visit our home and bestow prosperity and be seated here”.

Lord Ganesha, the elephant faced God, son of Shiva and Parvati, is the repository of all wisdom and the most endearing deity in the Hindu pantheon. He is the personification of all that is auspicious and a prayer to Him precedes all worship.

The year 2016 marks the thirty-second year of celebrations of Shree Ganesha Festival by the Tulu community in Oman.

How it all began….

Thirty-two years ago, on Shree Ganesh Chaturthi Day, the founders and members of Tulu Koota, Muscat celebrated the first Ganesh Chauthi festival in a classroom of Indian School, Muscat.

The very next year they moved to the Indian Cultural Association Hall (Darsiat) and thereafter, in mid-1990, the venue of celebrations was shifted to Lord Shiva Temple, Muscat. Since then, the tradition continues in the temple.

The three-day long Chauthi festival began on Monda, September 5, 2016 at the Lord Shiva Temple, Muscat . Shree Ganesh Festival Committee organized the entire festival upholding traditions and the spirit of fervor and piety amidst all festivities.

Floral arrangements from the entrance of the hall to the Mandap, depicted a total traditional feel and one would not miss the celebrations back home. Banana stems, mango leaves, sugarcane stems, tender coconuts, bunches of fresh dates, welcomed the devotees. Beautiful varieties of flowers like shevanthige, mallige, marigold, roses, hibiscus, were flown in from Bangalore and Mangalore. The idol of Lord Ganesha was aesthetically decorated with fresh flowers and flower garlands of beautiful hues and arranged in a beautiful pattern. The cornices and the ceiling were beautifully decorated with perfectly matched color combinations of flowers. A team of enthusiastic volunteers contributed to the beautiful arrangements, enhancing the traditional feel.

The glittering golden crown on Lord Ganesha and the silver umbrella were a part of the sparkling supplements.

A beautiful Rangoli depicting Lord Ganesha, replete with all the symbolic representation and ornate jewellery and a fresh floral border was created by Smt. Paru Negandhi and Smt Bijal Ved.

The rituals starting from Prathisthapana was initialized by the Main Archaka, Shri Shankar Narayana Adiga and assisted by Guru Pejathaya and a team of archakas, amidst the chanting of Mantras and shlokas. This was followed by Panchamritha Abhisheka and Gana Homa..

Om Shree Ganesha Vrinda Group chanted the Ganapathi Sahasranama, A large number of devotees participated in the Shatakai Seva and Laddoo Seva and sought the blessings of the Lord. Ranga Puja and Pushparchana, a shower of fresh flower petals, were offered to Lord Ganesha.

Thousands of devotees thronged the Shiva Temple hall on all the three days and sought the blessings of Lord Ganesha. Amidst the repeated chorus chanting of Ganapati Bappa Morya, the ritual of immersion was performed.

Prasada was served on all the three days after the Maha Puja. Traditional Mangalorean Cuisine was served on plaintain leaves on the last day.

The ceremonial couple for the 32 nd year of Ganesh Chaturthi celebration was Shri Ramesh Shettigar and Smt Jayalakshmi Shettigar.

Your article in Mangalore.com is a delight to read. Detailings are very engrossing. Thanks to Nagesh for beautiful shots.

Vote Up0Vote Down
sandeep a

Congratulations to Tulukoota Muscat for organising another beautiful Ganesh Chathurthi in Oman.

Special thanks to Mrs Jaya Ramesh and Manglorean.com for capturing the festivities.

It was such a wonderful devotional experience filled with cultural exuberance which is Shree Ganessha festival.
No wonder devotees are looking forward to this event every year for such divine event.
As aptly described by Mrs Jaya Ramesh Shettigar this year was not an exception. We had a re run of the same experience after reading the report, excellently portraying the event with minute details. Thanks Mrs Jaya Ramesh Shettigar !
Thanks Mangalorean.com for excellent coverage!

We love this great occasion for all people of Indian origin especially of Karnataka origin and particularly of coastal origin to mingle with each other in a festive mood. This occasion makes every one remember the festivals in India!
Thanks to Tuluoota committee for providing such an opportunity to all of us . The report is very meticulous about the happenings, thanks to Mrs Jaya shettigar.
We must appreciate Mangalorean.com for publishing this news item