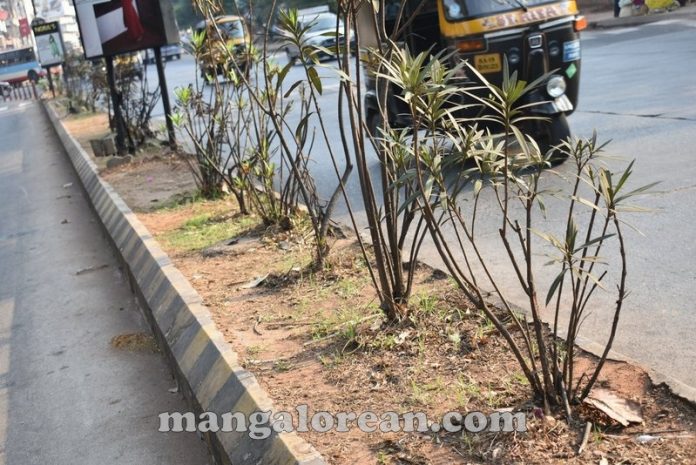 Green Life Abused! Why Plant Them, If You Can’t Water Them?

Mangaluru: Every year on the World Environment Day, the government, MCC and nonprofits enthusiastically plant thousands of saplings in and around Mangaluru as an annual ritual. Despite these campaigns, the city has been losing its green cover year after year. The reason: lack of scientific planning before planing saplings and near-zero monitoring later. This year too, several organisations joined hands with the Forest Department to plant saplings in city limits. But sadly without scientific planning, maintenance of database and regular monitoring of the saplings, the exercise has not resulted in desired results.

The funny part is that every year, the ministers or VIP’s do the planting of the saplings on the same spot where a sapling was planted a year before- since the last year planted saplings have gone dead due to care or no watering. Similar has been with the case of thousands of saplings planted by Mangaluru City Corporation on the road dividers, which presently many have been dead or on the verge of dying due to lack of watering and maintenance. Sources reveal that around 29 thousand saplings were planted after road widening projects, on the stretch of the dividers.

The cost of each sapling was Rs 39 which MCC had to bear the expenses, but with carelessness and non maintenance of these plants, which are dying has resulted in tax payers money going down the drain. Just look at the plants on the road dividers, in front of St Agnes College-Bendore stretch, from clock tower to Ab Shetty Circle, KSRTC bus stand to Kuntikan/Derebail, and many others- you will see that most of the plants have dried up or going to die soon, with lack of water. If you look at the bottom of the plant, the soil is completely dried up-like it has been not watered for days.

At home we water plants, either in the morning or evening, but God only knows how many times these plants on the road dividers have been watered. Earlier we could see a water tanker sprinkling water on these plants, but recently the water tanker is not to be seen-as a result most of these plants have dried up. If you look at the stretch from Clock Tower to AB Shetty circle where a bunch of bougainvillea plants have been planted at a cost of Rs 22 per plant- but many have been already dried up and few of them will die soon, since they have not been watered.

If MCC is not bothered to take care of these plants, then they should hand over the maintenance to social organizations like Lions Club, Rotary, Jaycees etc- so at least they can take the responsibility of nurturing and watering these plants, before they all vanish. In order to live and grow, plants need four basic elements: air, water, nutrients, and sunlight. During the process of photosynthesis, plants use carbon dioxide to make food and release oxygen, as a result. Roots carry water and nutrients to the plant. But, is MCC providing all these needs for the plants- I don’t think so, by looking at the fate of the plants?

Dear Mr. Alfie, this is another loop hole to rob Public Money. I was requested by a Control Room Policeman to look at the Plants between AB Circle till Pandeswar on the Divider. I did call Forest Dept.and got the answer: Contact MCC Office. I called MCC Office and the result was like Dog trying to Catch the Tail by going round and round. I kindly request You to Contact A good Social Worker to find out the Total Amount of Money Paid to Tanker Owners through RTI(Right To Information). This will expose the corruption between Tanker Operator and MCC… Read more »