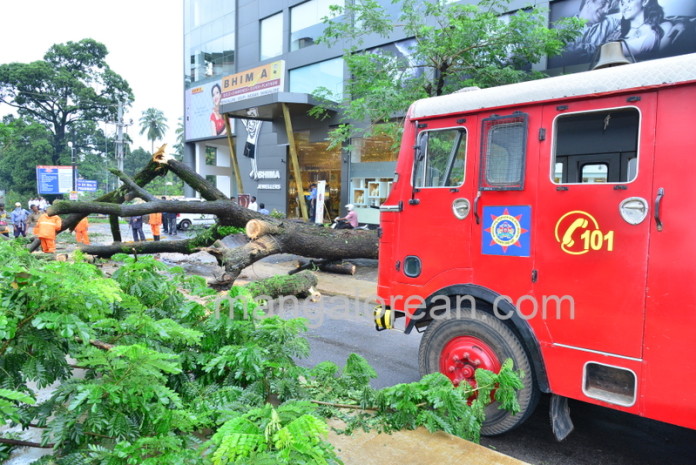 Mangaluru: A huge tree next to Bhima Jewellers near SCS Hospital on the Balmatta road was uprooted here, on July 24.

Speaking to Mangalorean.com, a nearby resident said that the incident happened at 9:45 am. The interior of the tree had been rotting. When a lorry with a high load was moving through the road, one of the branches of the tree entangled with it, causing the tree to fall down.

Due to the ongoing concreting of the road, there weren’t any vehicles and the damage caused was kept to a minimum. The resident also brought attention to another tree on the other side of the same road.

“During construction of the adjacent building, only the branches on one side of the tree were cut. Why did the corporation not remove the entire tree itself? That tree also poses a threat to the surroundings and may fall down at any time,” he added.

Fire Rescue personnel reached the spot and engaged in fragmenting the fallen tree. The tree has also caused damage to an electric pole which is now tilted to one side.

Next one will be the tree in front of Domino Pizza -Western Union Office in Bendoor Well. Informed about it to MCC and Local Corporator some time back. By removing now no fortune can be made,but after falling lot can be pocketed through repairing road damage by Contractors . Few People will see the day light when few trees on hillside on road from Nanthoor Circle towards Tollgate. Due to construction of 3 1/2 lane and installation of Banner Posts, removed the soil of the hill. If one tree falls on loaded Bus, incident will open the eyes of MCC… Read more »