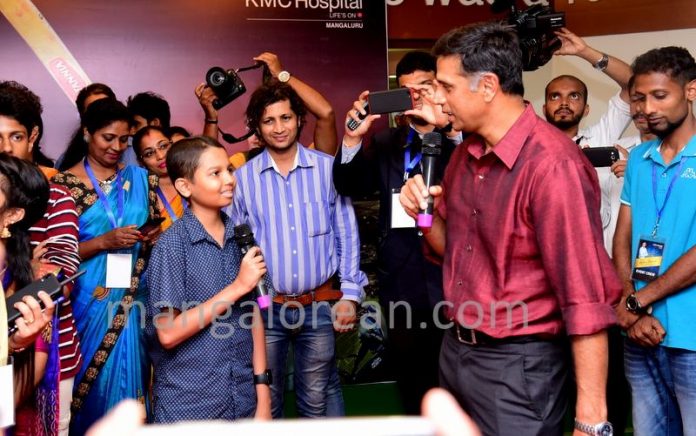 Mangaluru: Rahul Sharad Dravid, the former Indian cricketer and captain, widely regarded as one of the greatest batsmen in the history of cricket, and the current Overseas Batting Consultant for the Indian team, and also the head coach for the Under-19 and ‘A’ teams, and who had scored nearly 25000 runs in international cricket, colloquially known as Dependable or Mr. Dependable, and often referred to as The Great Wall or The Wall by Indian cricket followers, was in Mangaluru today, 23 April 2019 as the Brand ambassador of Manipal Hospitals’ during the launching of Manipal Arogya Card, at the TMA Pai Convention Centre, Mangaluru, and after the MAC launching ceremony, Rahul interacted with the audience during the session “MEET THE WALL”!, with compering done by RJ Preethvi of 104 FM Fever-Bengaluru. 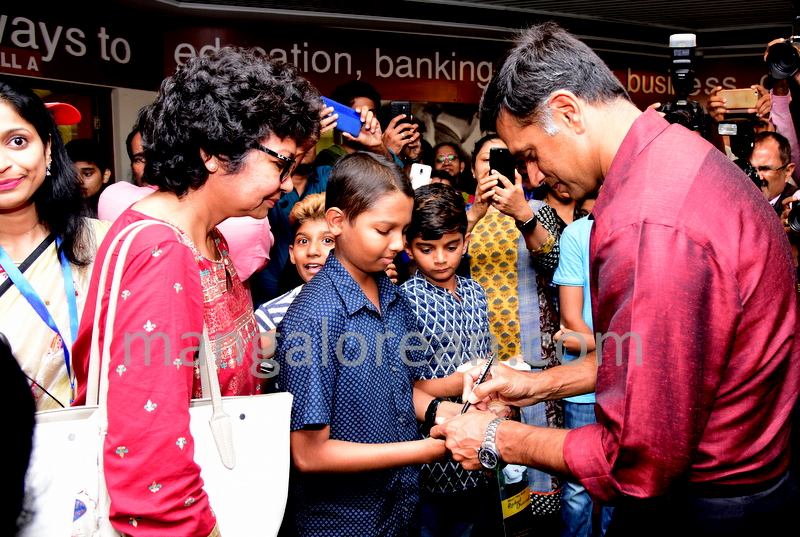 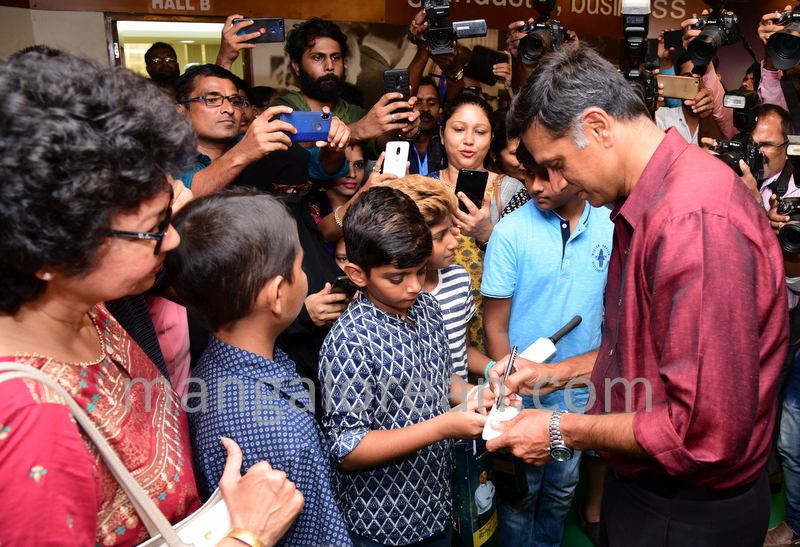 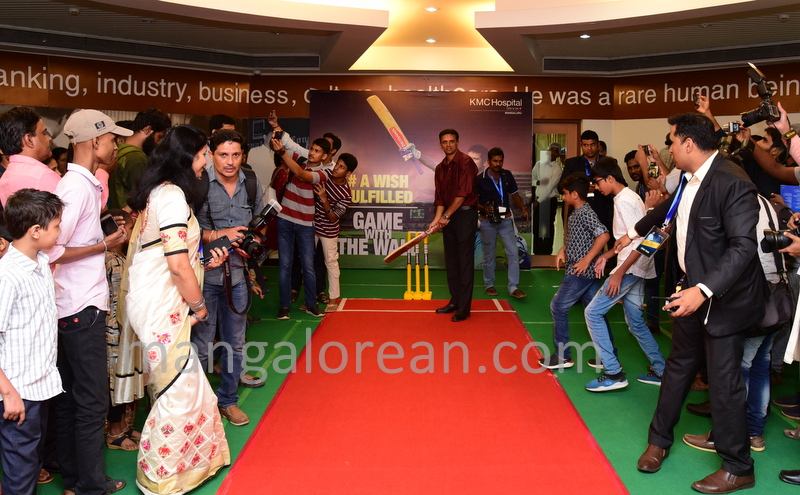 Rahul Dravid fondly called as Mr. Dependable, and “The Wall” is one of the best and fantastic batsmen Cricket has ever seen. It is proven that he is a great player. He is remembered as The Wall, a man of impregnable defense against the best of attacks. The straight bat. The resolve in the eyes. The unflinching focus. The unhurried approach. The risk-eliminating batsmanship, Rahul Dravid has gone down in folklore as The Wall of Indian cricket. A master of technique, a paragon of patience, the ideal man to have to protect the innings against formidable foreign attacks. And hence he is the man who is supposed to have conquered the foreign pitches. Who is supposed to have defended India in every crisis? And thus the sobriquet Wall. 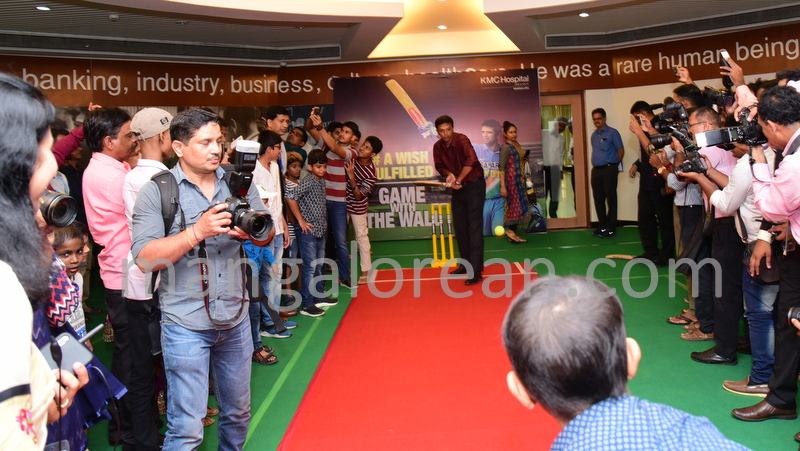 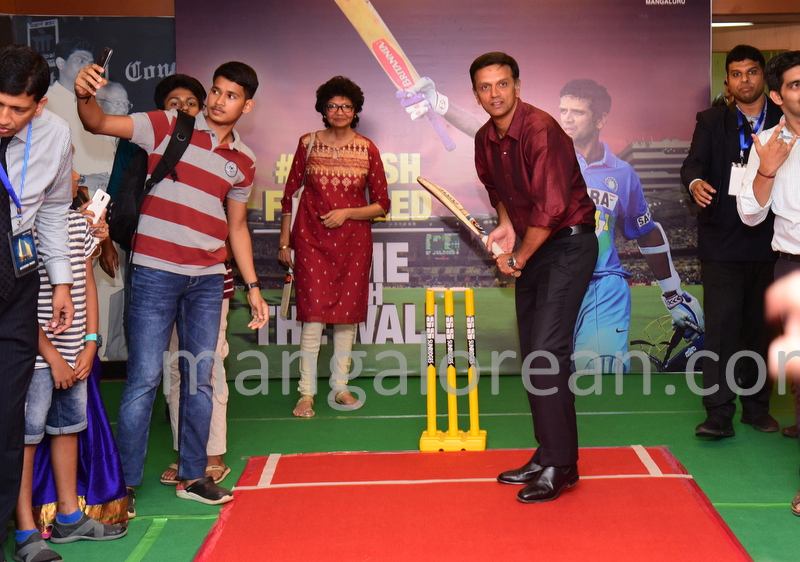 Dravid played from June 1996 to January 2012, serving the country with honour, pride and distinction. Indian fans have the penchant of erecting God-heads. If Tendulkar is God to many, Sunil Gavaskar is the Original Little Master to a great number, Dravid is The Wall to others. For many others, “He was a team man.” “He was a gentleman”. Yes, Rahul Dravid,the Former Indian captain and current coach of India’s Under 19 and India A teams, known as India’s Wall, a classy No.3 batsman and an inspiration to up and coming batsman, a man with Patience, Resilience and above all, Class, was all ready to interact with audience, answering a bunch of queries posed at him during the “MEET THE WALL” session- 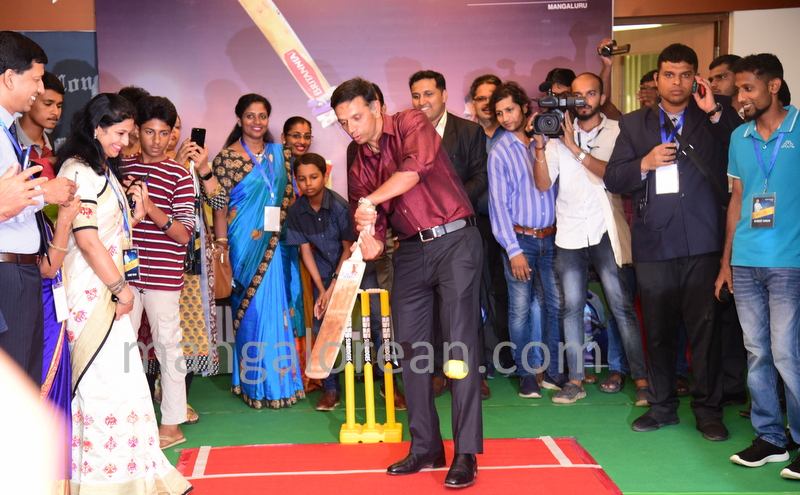 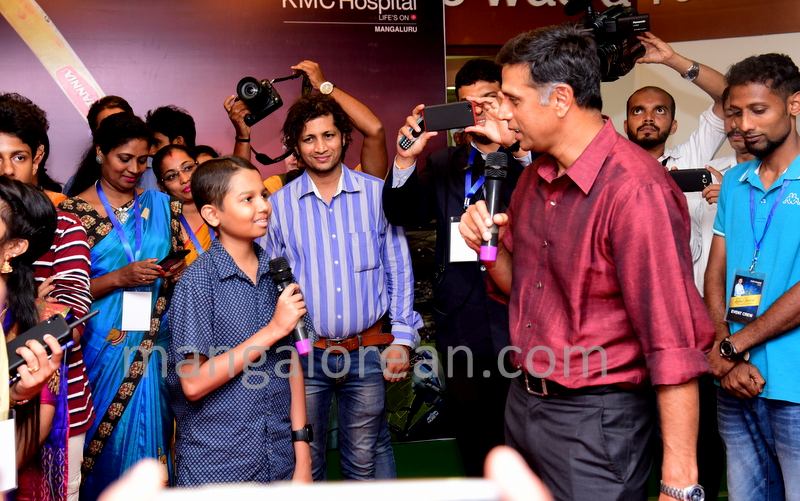 Q : (Ramesh) Between June 1996 and January 2012, what were the most difficult foreign lands for you to bat in the world? 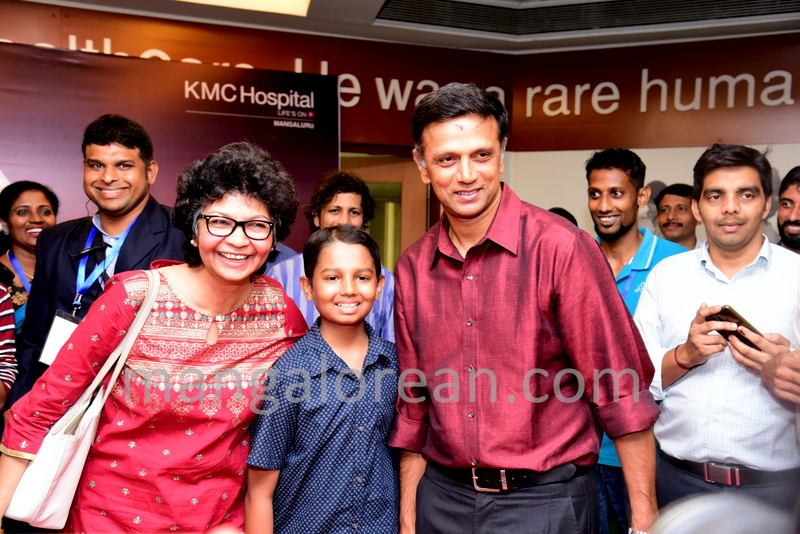 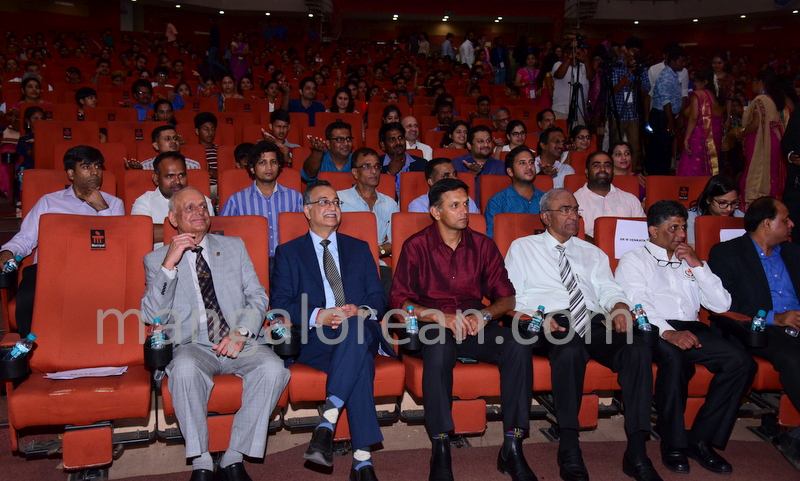 A: As usual, I won’t go by airy gut feel but by rigorous data. The answer is South Africa, Australia and Sri Lanka. South Africa and Australia were always difficult places to bat, and Sri Lanka with Muttiah Muralitharan coming at you relentlessly was as tough. However, if we look closer at my adventures Down Under, 619 runs at 123.80 were scored in that famous 2003-04 Australian series.

Q : (Ms Sushma) What is one value that you hold dear to your heart?

A: Hard Work towards Cricket sport. I am lucky to be able to play cricket, and I availed all the opportunities in that field. I thank God for giving me the gift of cricket talents

A : (Arun) Have you liked Mangaluru Ice Cream when you visit here?

A : Sure I do-25 years ago I tried Ideal Ice Cream, and the favorite ‘Gudbad’- and 25 years later I still love Ideal Ice Cream. But I am not sure any more being health conscious and reaching that certain age when you have to be careful as to what you eat. But I cherished the flavours Ideal Ice cream had to offer. 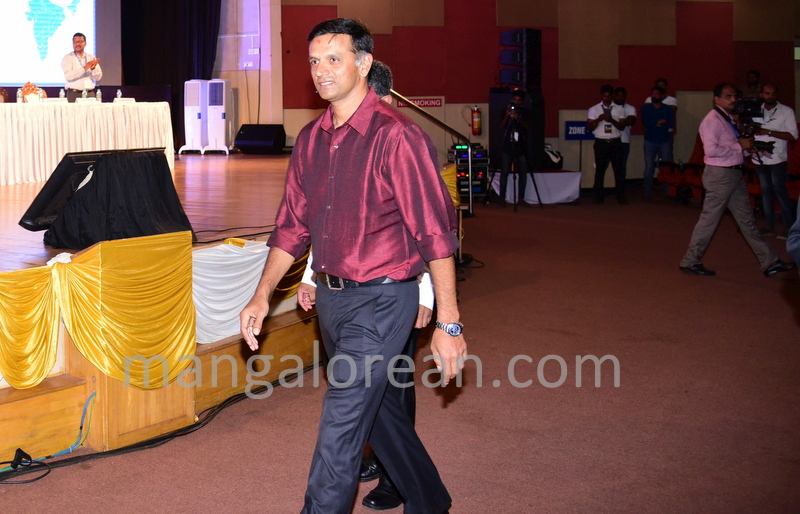 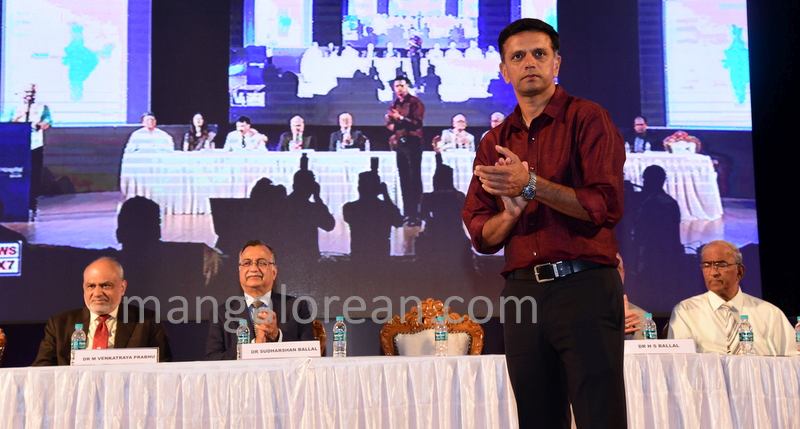 Q : ( Ms Dikhshita) Among many, Who do you look up to as your number one ideal person?

A: Of course, my parents for giving me all that love, care and bringing me up. They are my perfect example, and I will always follow in their footsteps. They have taught me ethics, good characters and manners. In cricket, I have great respect towards G R Vishwanath, Sunil Gavaskar, Kapil Dev, and few others, who were my heroes when I grew up while showing interests in cricket.

Q : (Sanjay) What are your hopes of Indian Cricket team bagging the World Cup, in case you were a Captain? 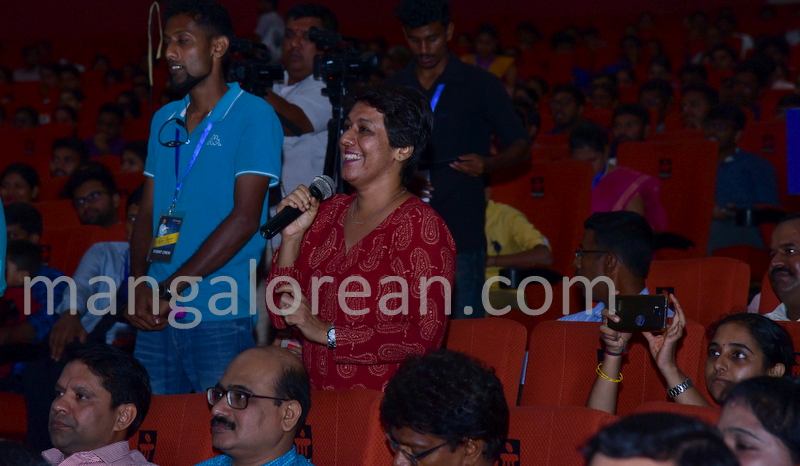 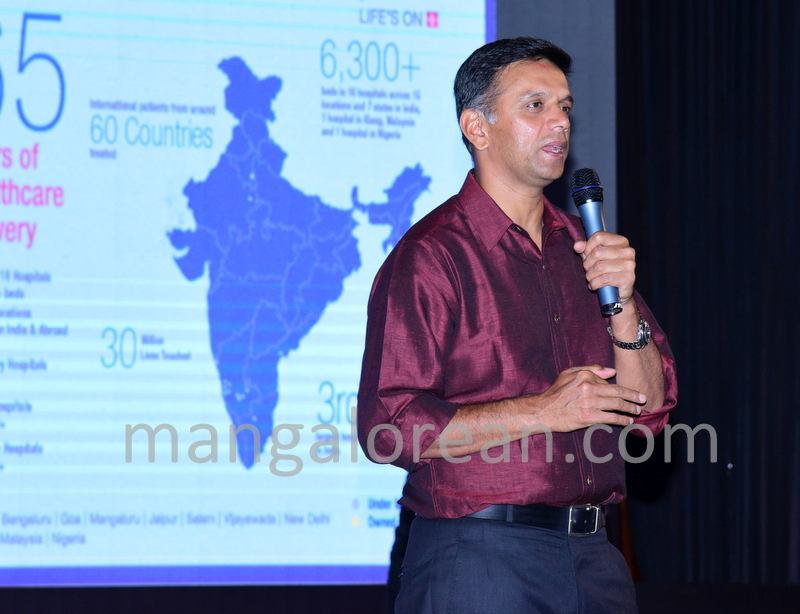 Q: (Dr Sharan) Sometimes we notice the qualities of Anger in you, how do you control your Anger Management?

A: I have always tried to be calm, relaxed and with patience during certain circumstances on the cricket field. But in a game, anger may come quickly which is hard to avoid. But from my young age I have never been arrogant and never showed in anger, whatsoever.

Q: (Sujay) What tips would you give to stay for long at the crease?

A: Practice is number one, followed by hard work, determination and commitment. There is absolutely no Mantra or secret, but the practice is all that you need to be at the crease for a long time. 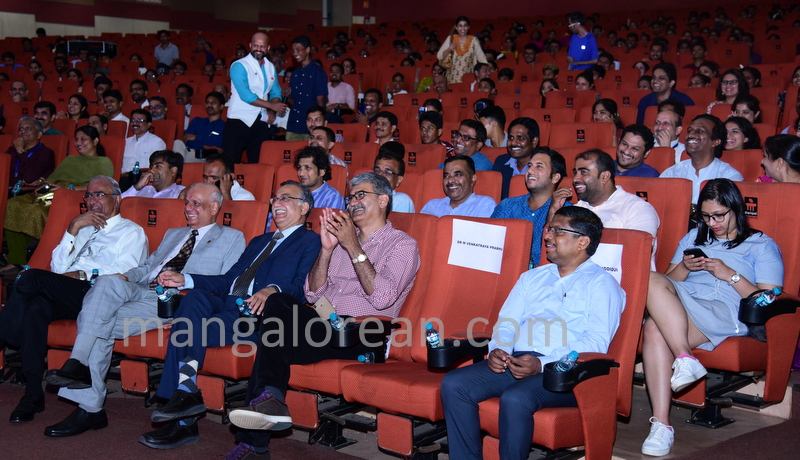 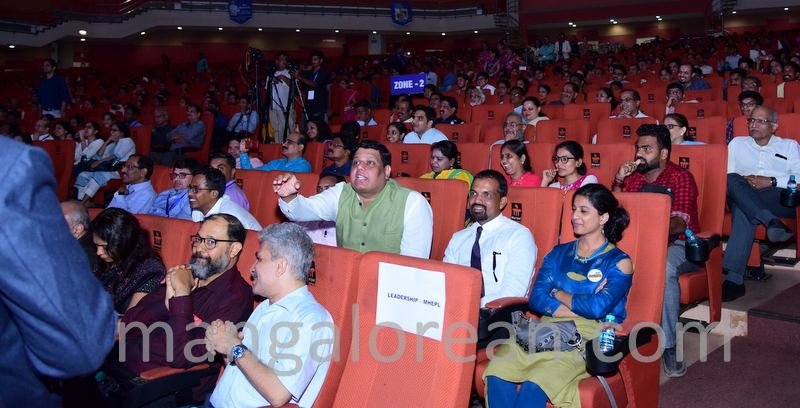 Q : ( Dr Ajay Kamath) England Cricketer Kevin Peter Pietersen has praised you a lot in his book, what magic you owe to him?

A: I was very much keen in learning from Keith, and we got along good on the field, even though we sometimes argued in the locker room. We both shared our bowling tactics, and we respected each other. We both shared a lot while playing between India and England. It was a better opportunity for me to learn from Keith about certain batting styles. I owe lots of gratitude to Keith, for being a good person with sportsmanship character.

Q: (Ashwin) Could you speak a sentence in Kannada?

Q: (Abhishek) Who inspired you to take up Cricket?

A: It was my father who was a lover of cricket, and who always used to take me along with him for cricket matches. He encouraged me to listen to cricket commentary on the radio, and that is how initially I got the love towards cricket from my dad. 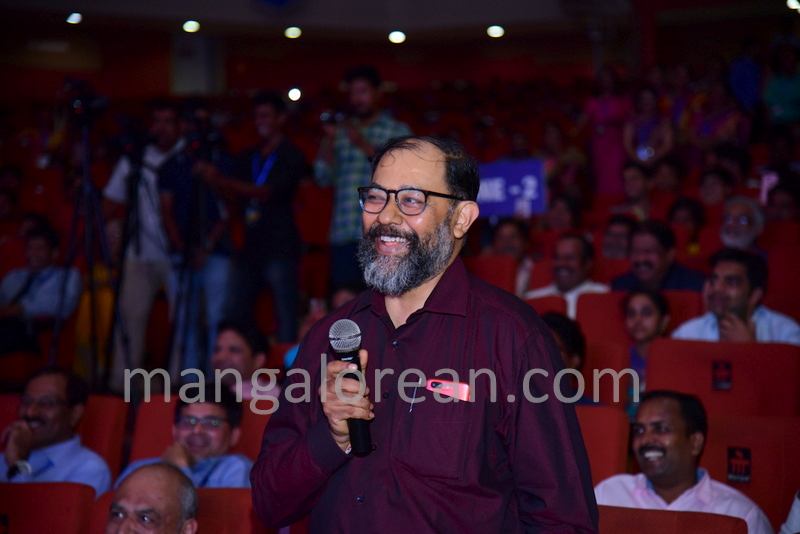 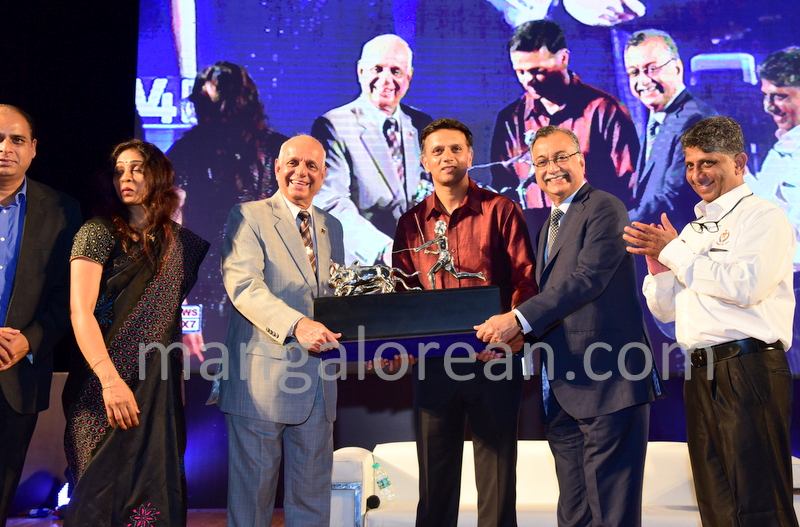 Q: (Raviraj) How did you manage your studies and cricket while in school and college?

A: First of all I had good teachers in school and college who helped me in the subjects that i missed during the sporting time. But I always balanced my time between studies and sports, even though it is tough to manage time between the two. You need to adjust yourself in balancing the time between education and sports.

Q: ( Ramesh) How do you motivate yourself?

A: I really enjoy what I do. I love playing cricket and respect that game, and it is part of my life. I like to coach youngsters and interact with them. I always try to keep myself busy either on the cricket field or interacting with youth, discussing about Cricket.

Q: (Balakrishna) have you considered of being Union Sports Minister?

A: Oh no, never will I enter into politics, and Sports Minister, no way/no chance at all. Politics is always that I want to stay away from.

Q: (Manjunath) When can we see you emerge as a Senior Coach?

A: I am happy as to what I am doing now. I don’t have any intentions to jump forward to a higher level. My present post keeps me satisfied, and I will do my best to train the young to be better cricketers. I am least bothered about higher posts.

Q: (Ganesh) Who will win the World Cup?

A: Who else do you think-INDIA, my man!

Q: (Charles) What do you have to say about your mental toughness?

A: I love to be a challenge in the contest. There are some qualities that determine the greatness of a human being, and not necessarily the amount of monetary success that individual accumulates. Thus these qualities serve as a common factor in almost every great individual in the history of humanity. One such quality is Mental Strength, and I have proved my capacity in it. I can handle the situation with calm and ease. And mostly I like competing in a positive way. Once again, I love to be in a contest.

Q: (Ajith) Who are two great bowlers that you had faced in the cricket series?

A: The toughest bowler that I ever face was Sri Lankan bowler Deshabandu Muttiah Muralitharan, and Australian bowler Glenn Mcgrath.

Q: (Ms Naira) Who is your favorite bowler, and do you like playing cricket or coaching?

A: My favorite is the one who allows me to hit a boundary? I love playing cricket more than coaching.

Q: ( Adhvith) Other than Cricket, which other sport do you like?

A: Next to cricket, Hockey is my favorite- and I have played in a hockey team during my college days at St Joseph’s College.

And in conclusion, let me assert great regards for Rahul Dravid, the batsman and the man who is next to none. We surely do believe he has been one of the very best batsmen produced by India. And yes, today’s interactions with the man, do indicate that he is a wonderful human being. Every person in the audience enjoyed the deliberations of Rahul and his crisp answers to all the queries posed at him. Thank You, Rahul, for your presence in Mangaluru, and entertaining us with your jovial interaction.