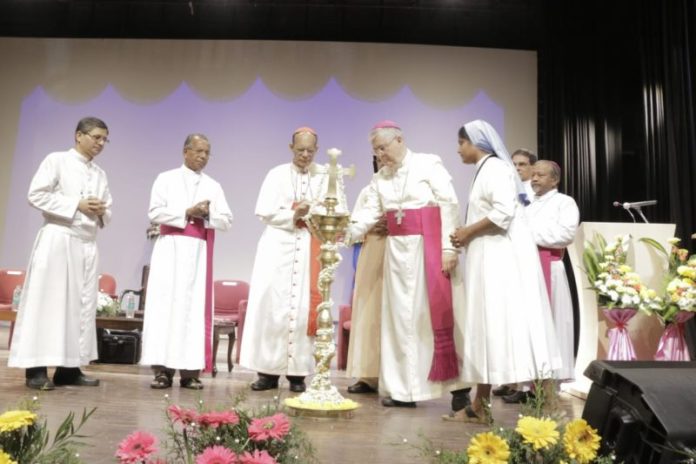 Bangalore: The 34th Plenary Assembly of the Catholic Bishops’ Conference of India (CBCI) began on February 13 with the Holy Eucharist presided over by Archbishop Giambattista Diquattro, the Apostolic Nuncio to India. Others concelebrated with him were Oswald Cardinal Gracias, President of CBCI, George Cardinal Alencherry, Major Archbishop of Syro-Malabar Church and Baselios Cardinal Cleemis, Major Archbishop of Syro-Malankara Church, and the CBCI Office-bearers, Archbishops and Bishops from all over the county, besides, a great number of priests, religious and lay faithful took part in the service. 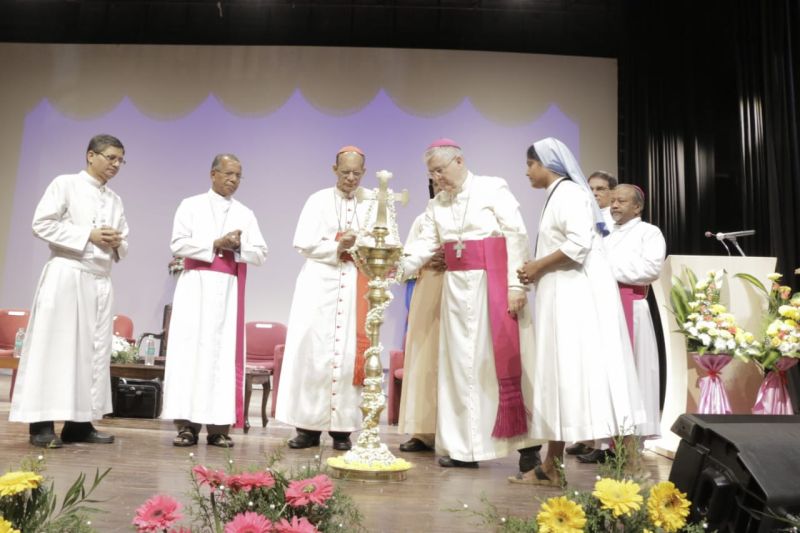 Archbishop Diquattro, Vatican Ambassador to India preaching the homily recommended the love and faith of the Phoenician woman whose request Jesus granted. She had love in her heart and faith in Jesus. Seeing her faith, Jesus worked a miracle for her. The power of love worked in such a way, the woman coming from such background of adultery helped her and her daughter. And she called him the living God. For her faith the Lord blessed her. There are people who make this journey every day silently seeking the Lord. With God’s blessings, one could face objections and challenges of life. He who is a believer in God would receive many and great blessings. Jesus keeps all on his path and never lets anyone get discouraged.

In the inaugural address, the Apostolic Nuncio, Archbishop Giambattista expressed the sentiments of Holy Father’s Apostolic Letter in which Pope Francis reminded the church that “We are called to be the light for the world and at the same time, each diocese should strive to shine light on our wrongdoing before the eyes of the world.”

He exhorted the clergy in India to commit themselves to the truth within the Church, though it is painful, but which, in keeping with the Second Vatican Council, has been launched with determination. This undertaking goes way beyond the problem of abuse and is ordered towards a substantiated evangelical reform of the church.” 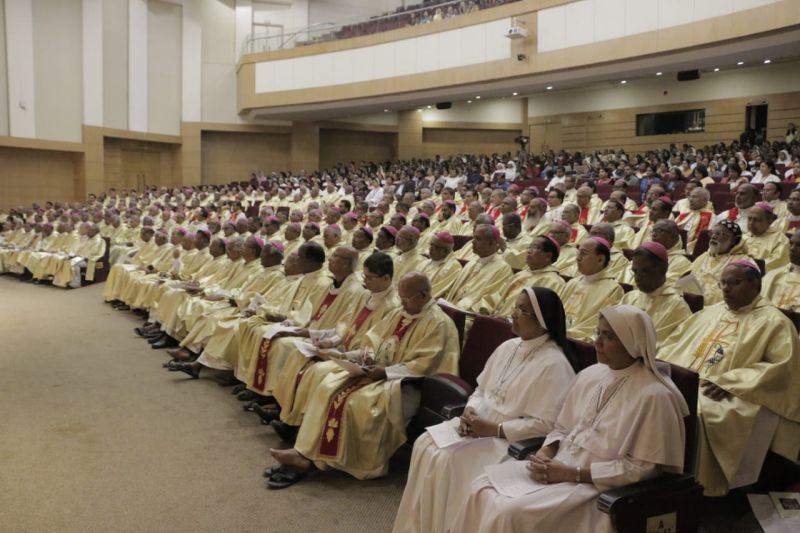 “It is a matter of not betraying the primary evangelical concern of the Church in favour of the last, the marginalised and vulnerable people. This concern promotes a spirituality which invites all of us to shoulder co-responsibility and sharing, creating amongst the faithful a climate of openness in truth, that is one of coherence and transparency, regardless of anyone’s role,” he added.

The Nuncio also expressed happiness at the care and admiration of the efforts put in by the bishops in preparing comprehensive and meaningful reports of their pastoral ministry.

The lighting of the lamp by the dignitaries marked the inaugural session. Dr Peter Machado, Metropolitan Archbishop of Bangalore, accorded a warm welcome to all the dignitaries and the participants. Speaking on the occasion, the Archbishop mentioned that Bangalore is known for hospitality and goodwill to those who come for various purposes. Undoubtedly, there is an influx of migrants from different parts of the nation who come here for their education and work.

The Archdiocese is celebrating the “Year of the Poor” since our primary commitment is to follow the footsteps of Lord Jesus Christ who reached out God’s mercy and compassion, love and care to the needy and the poor. For a meaningful celebration, some 10 action plans have been initiated, namely: simple lifestyle; avoidance of culture of waste; education of the poor children; feeding the hungry; healing the sick; supporting the imprisoned; welcoming the migrants; provide shelter to the homeless and concern for specially-abled. He also wished the participants a comfortable stay and a fruitful deliberation at this Plenary Assembly.

The Apostolic Nuncio conveyed to the participants the good wishes and the blessings of Pope Francis and also assured them that he would convey to His Holiness their filial greetings. He appreciated the services rendered by different Catholic Organizations under the leadership of the local bishops. The Nuncio stressed that “The proclamation of the good news must be carried out through the joyful services.”

Cardinal Oswald Gracias, President of CBCI and also one of the advisors to the Holy Father Pope Francis, informed the participants that the CBCI has completed 75 years since its inception and it is also one of the largest Bishops’ Conferences in the world. For better service to the people, he called for effective and dynamic leadership.

The Theme of the Assembly is Dialogue: The Path to Truth and Charity. And as such, all of us are called to walk together in harmony and solidarity to live with one another in harmony and peace. The Church has been always championing the cause for continuous dialogue and peaceful interaction to build the world community. Hence, we have to break down walls of separation and build the bridges of unity.

Cardinal Gracias also announced the release of the new lectionary after two days. He thanked and lauded CCBI and Goa Archbishop Philippe Neri for the landmark achievement of the Church in India.

Bishop Joshua Mar Ignathios, Vice President-I of CBCI, read out the detailed report of the activities of the CBCI during the past two years and also mentioned the nominations of the new bishops and the retirement of the bishops who attained their superannuation of 75 years. He also expressed his deepest condolences on the demise of the bishops in the past 2 years. He elaborated the point that the Church in India carried out its dedicated service in spite of hardships, crises and conflicts in certain parts of the country. The CBCI through its various commissions has been rendering commendable services to all the people without any discrimination in the fields of education, social work, health care and ecology. He placed on record the dedicated services rendered by the retired and demised bishops to the CBCI.

Fr. Paul Parathazham, Director of St. John’s National Academy of Health Sciences and the local host, welcomed the participants and suggested to them a few guidelines for their stay.

Fr. Jervis D’Souza, the Deputy Secretary-General of CBCI, proposed the vote of thanks. He thanked all concerned, particularly the Apostolic Nuncio and the CBCI office bearers.

One of the meeting days, the participants will have three separate meetings specifically related to the three rites, namely, Latin, Syro-Malabar and Syro-Malankara Churches.

The participants will deliberate on the theme extensively with a view to finding out new avenues for dialogue and unity within and outside the Christian community. The representatives of other religions have been invited to address the participants to share their views on the theme of the assembly.

This Inaugural Function of the 34th CBCI Plenary Assembly came to a close with a prayer for the nation, its leaders and its development and growth.