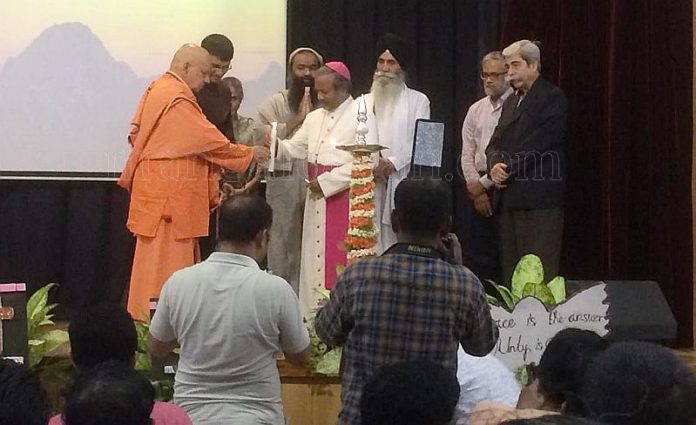 Bengaluru: Heads of various religions commemorated the 800th anniversary of the encounter between St. Francis of Assisi, a medieval Saint from Italy and Sultan al-Malik al-Kāmil of Egypt here on July 27 (Saturday). The followers of St. Francis of Assisi, popularly known as Franciscans, serving in the Archdiocese of Bengaluru observed this anniversary together with Archbishop Dr Peter Machado, by holding an Inter-Religious Event on Dialogue, Peace and Harmony at St. Joseph’s Boys’ High School Auditorium, Bengaluru. 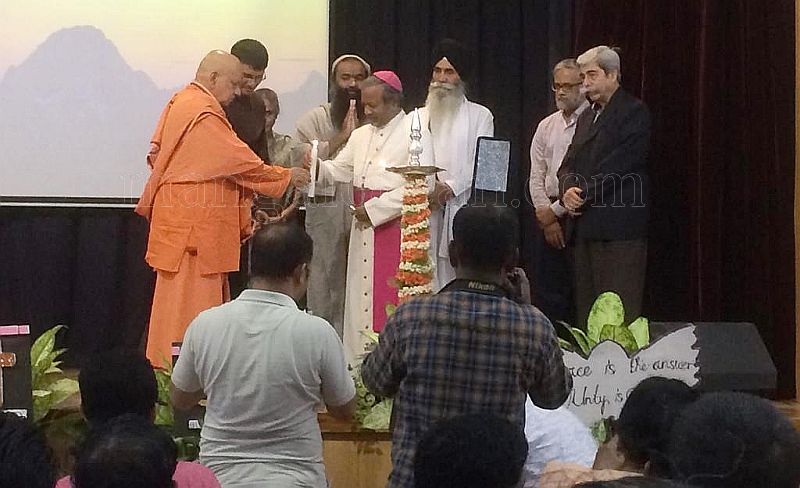 In his presidential address, Dr Machado said people of all religions aim at the same holy and spiritual aspects to lead a good life. Unfortunately, people do not follow even 10% of the tenets and teachings of their respective religions. St. Francis of Assisi was one of the greatest champions and advocates of harmony. It demanded tremendous courage for Francis to go to Sultan al-Malik al-Kamil of Egypt in the given situation. Sultan al-Kamil was also a good man. At that period non-Muslims also enjoyed social and legal freedom. Francis’ resemblance of the poor and his approach towards all creatures attracted Sultan al Kamil towards him. Archbishop said Francis loved each creature and every creation of God. 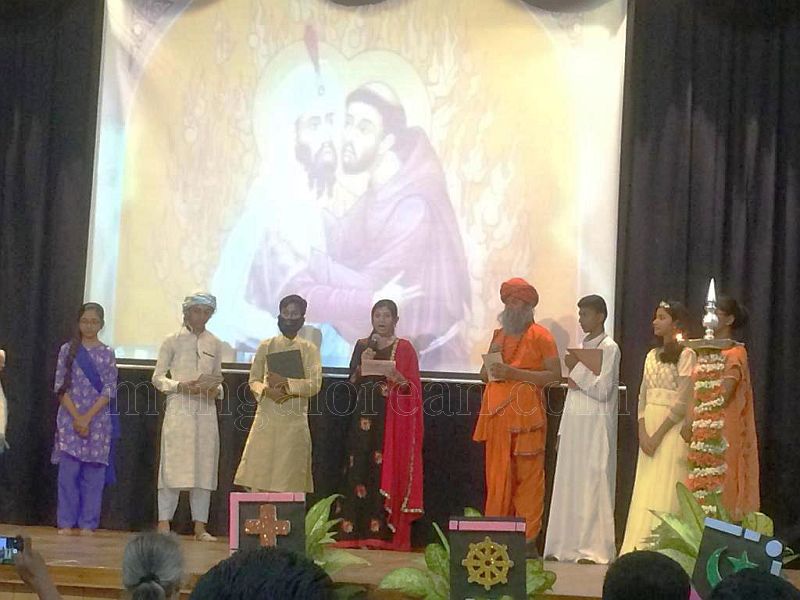 Francis liked the 99 names of traditions of Muslims. God is the most expansive way for Francis. He had reverence for every religion. Francis of Assisi considered Sultan a nobleman. Both had high regard for each other. This happened 800 years ago. Dr Machado particularly spoke on Islam rather than other religions due to the relation Francis had with Sultan al-Kamil. The Archbishop said he liked the five pillars of Islam. They are the five obligations that every Muslim must satisfy in order to live a good and responsible life.: They include Faith (Shahadah), Prayer – five times each day (Salat), Charity or alms-giving (Zakat); Fasting during the month of Ramadan (Sawm) and Pilgrimage to Mecca (Hajj).

Archbishop encouraged all to go to places that are centres of pilgrimage so as to increase each one’s faith in God. Dr Machado urged all present to be ambassadors of peace and harmony. Ultimately, whatever religion one belongs to, we all believe in one God, Archbishop said and added, let make in India be translated to take from India – Peace and Harmony. 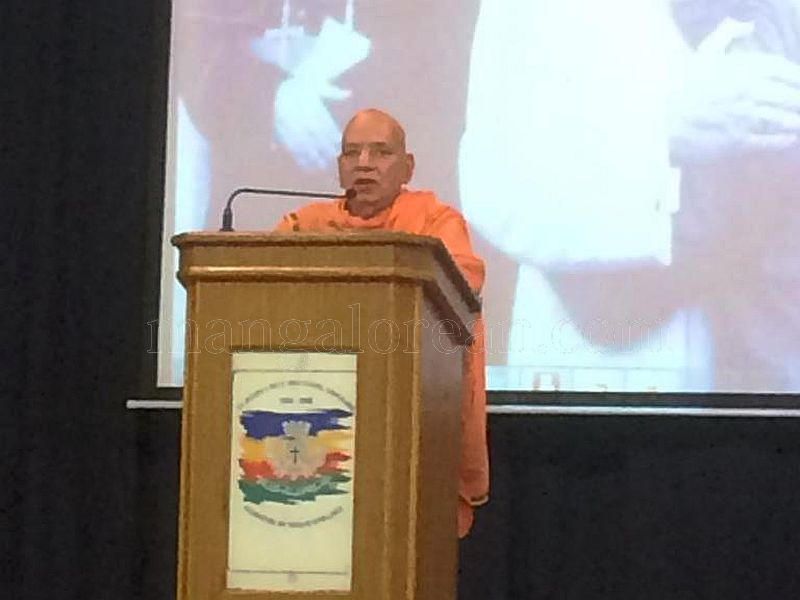 Swami Tattwarupananda of Halasuru speaking on the occasion called upon all to follow the footsteps of Francis of Assisi who stood and worked for peace and harmony among different communities. He encouraged a packed hall of people from all walks of life to look forward to the perfect situation of peace and harmony in society. From time to time, great persons appeared in society to groom, shape and guide people of the particular time. Francis lifted the spiritual life of many and it is relevant to remember him on the 800th year of anniversary. It is also important to purify our senses and thoughts.

GianiKewal Singh said we all came from one light and also aim at the same goal. Everywhere and anywhere we go, we see Gurugraham – God’s presence. Grurugranth is like the Bible and the Quran of the Muslims. We need to accept the commonality of religions and faith leads all to universal prosperity. 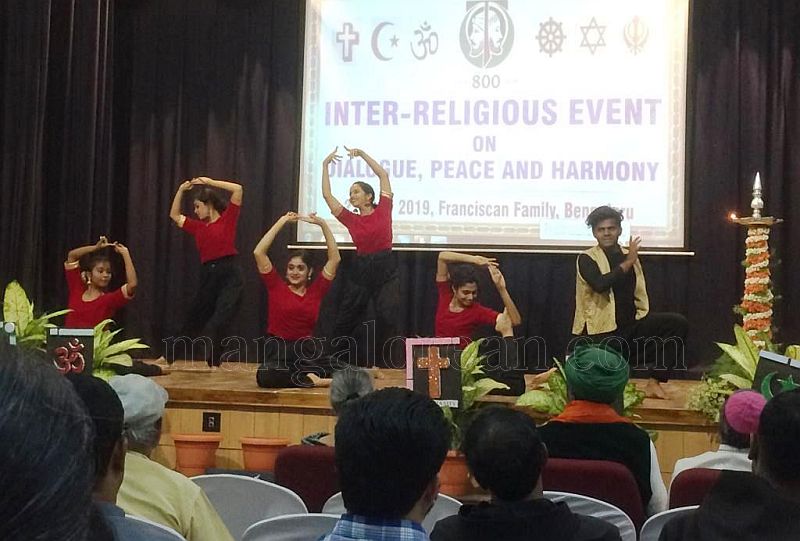 Mahamuni spoke of Confucianism on the occasion. Its primary purpose is to achieve harmony, the most important social value. Confucianism strongly emphasizes Mercy. Confucianism, the teachings of Confucius during 500 BC, has played an important role in forming Chinese character, behavior and way of living. He called for witnesses of faith and one’s Dharma. He said the idea of nationalism be given priority as people could live in peace and harmony without conflicts. He prayed, let peace be everywhere.

Shreya Vakil, Parsi, began his talk with a bible quote: In the beginning, was the Word, and the Word was with God, and the Word was God. He said we lost faith in mankind. We lost God’s love among people. It is the supreme irony that we replaced hate for love. When they were young, they were taught to respect all religions and faiths. All children are of the same Father. We require to trust each other. God has given the most powerful tool – the four-letter word – LOVE. Again, quoting bible he said, Ask, and it will be given to you; seek, and you will find; knock, and it will be opened to you. All should be seekers of peace as blessed are the meek, for they shall inherit the earth and blessed are the pure in heart, for they shall see God.

Vakil also narrated a true story of the miraculous healing of a 27-year-old lady who remained in the hospital bed for several days as she got paralyzed below the hip. A statue of Mary of Padua was taken around including the hospital where the lady was lying. She felt the vibration on the legs and she ran towards the statue. She could run and she recited the rosary, though she was not a Christian. He surprised all saying the lady was none other than his mother. He said one need not be a Christian to have faith in Jesus and experience God’s love and mercy. Life is beautiful, live it and encourage one another. Shreya Vakil concluded saying India is our nation, heaven our destination. 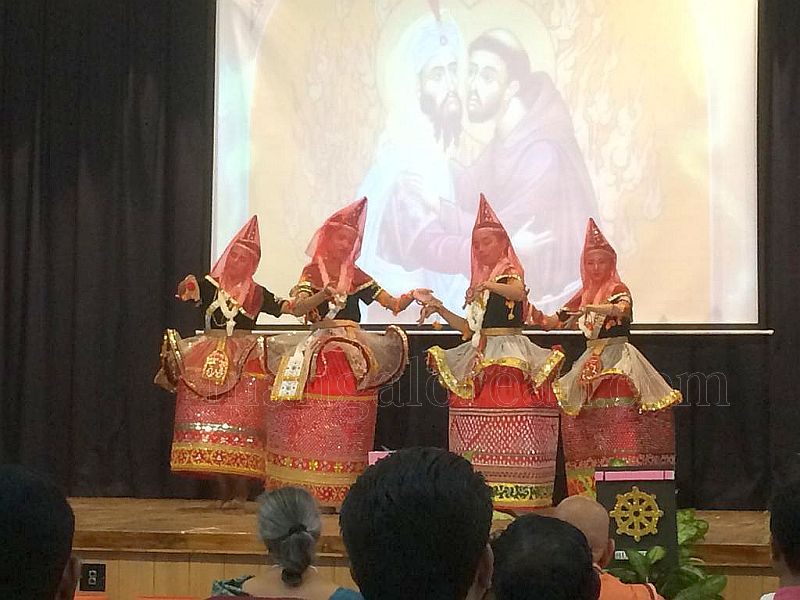 Dr J Bhavani, one the dignitaries, said she believed peace comes from internal dialogue. No God likes to fight. Only human beings make wars and go for battles. Without it, we do not have to assert that we want to argue.. It is very difficult to wage war without pain and suffering. She wondered why people fight in the name of religions. It is the single person (God) who is called by different names. We are all Indians and to be extremely loving and turn to be peaceful people.

Dr M T Matheen who runs charitable hospitals said people kill each other and wage wars for the sake of religion. Hatred begets hatred only and love does the same. All fights have a base on religion. Greed makes people fight. The golden rule is that wish for others what you wish for yourself. He spoke of radical love and freedom. One’s freedom of expression should not infringe on others. Need to focus on one God and one truth. And let there be one nation but not one election.

Fr. Praveen Henry D’ Souza, OFM, Minister Provincial, in his inaugural and welcome address spoke at length on Francis of Assisi’s role in bringing peace and harmony among warring groups. He spoke of the relevance of the gathering and importance of ecumenism and Pope’s stand on dialogue and destination to live with dignity as brothers and sisters. Mother India gathers all together like a mother does with her children. Fr Praveen who was the force behind the event urged all to imitate the goodness of God.

Fr Praveen presenting a bit of background said, in the Middle Ages, there were several Christian military expeditions from Europe called Crusades against the Muslims in the Middle East to gain control of the holy sites considered sacred by both Christians and Muslims. In the year 1219, when the ruthless war was at its peak, St. Francis of Assisi undertook a different expedition to meet the Sultan al-Malik al-Kāmil to propose the end of war and to encourage peace and dialogue. St. Francis met the Sultan al-Malik al-Kāmil in a place called Damietta. St. Francis enjoyed the brotherly hospitality of Sultan, preached peace in the court of Sultan and returned to Italy enriched by this visit. 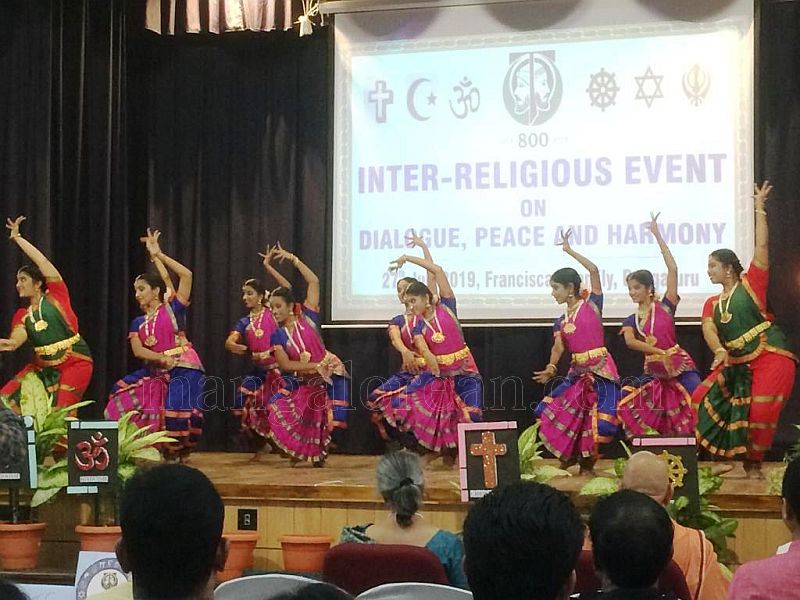 St. Francis and the Sultan were deeply touched by each other’s humility, openness and desire for peace. This profound encounter led St. Francis to craft a new way of life for his brothers about how they could go among the Muslims as instruments of peace.

This encounter between St. Francis and Sultan offers us the model to respect, to dialogue and to live in peace as brothers and sisters despite the religious differences. Even though it is 800 years ago that St. Francis undertook this journey of peace, such an initiative is indeed the need of the hour today.

Marking this anniversary, Pope Francis undertook a historic visit to UAE. Pope held a meeting with Sheikh Ahmed al-Tayeb, the grand imam of Cairo’s al-Azhar mosque in Abu Dhabi. This visit marks the openness towards one another, earnest desire for peace and promotion of universal brotherhood. Pope’s visit to UAE is an inspiration and an encouragement for us to open the avenues of dialogue with people of other faiths and promote peace in the society. 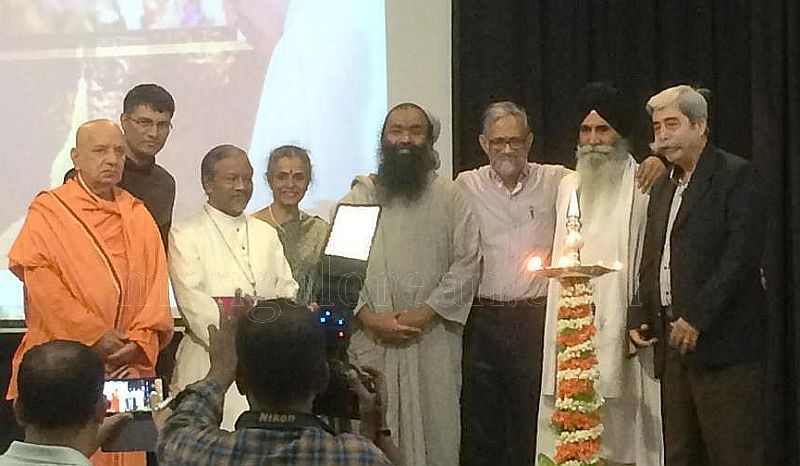 The Inter-Religious Event would prepare a way as to how it is possible to find the common ground for peaceful and harmonious existence in the world in spite of our differences.

India, our beloved nation, is home to people of different faiths. India has always been a nation of dialogue, peace, harmony and tolerance. The Franciscans ministering in Bengaluru and elsewhere in India commit themselves to promote respect for all faiths, to encourage dialogue across various religions and to create peaceful environment walking in the footprints of the Founder St. Francis of Assisi.

People of different faiths, young and old, men and women participated in the celebration.
Earlier, the programme began with an invocation prayer dance by JyotiNivas Autonomous College girls. The seven dignitaries lighted the traditional lamp.

The participants also took out a Peace March with lighted candles to Brigade Road where all dispersed after prayer and handshakes.