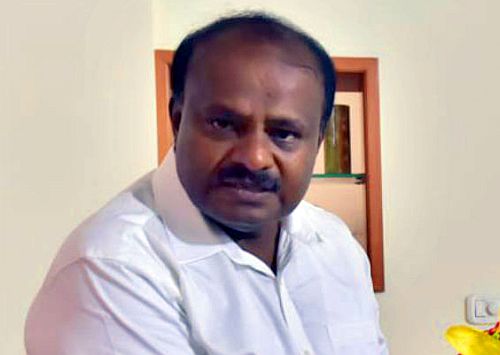 Bengaluru: Referring to the five byelections due in Karnataka on November 3, Chief Minister H D Kumaraswamy maintained on Tuesday that their results would be an indicator of things to come on the national political scene.

Participating in a Meet the Press programme organised by the Press Club of Bangalore and Bangalore Reporters’ Guild here, he claimed that the Modi wave, which had swept the country in the 2014 general elections, had faded and the change would begin after the bypolls.

“It is not important whether there is unanimity among political leaders or not. Once the polarisation starts, everything will fall into place. Who will lead the team and everything else will be decided later. After the 2014 elections, the opposition have won most of the by-elections. For sure, Karnataka will set the trend for the 2019 Lok Sabha elections,” he asserted, recalling that the late Prime Minister, Mrs Indira Gandhi had won byelections from Karnataka and Mr V P Singh too had held a meeting in the city before becoming Prime Minister. “Even the talk of the mahaghatbandan started during the swearing- in ceremony of the Congress-JD(S) coalition government in the state, where leaders of political parties across the country were present,” he pointed out.

Responding to the BJP leaders’s caustic remarks on JD(S) supremo and his father, H D Deve Gowda and former Chief Minister Siddaramaiah coming together on the same platform after 12 years of acrimony recently, Mr Kumaraswamy asked them to peek into their own recent past.

“What about Mr B S Yeddyurappa (state BJP chief) and Mr B Sriramulu (senior BJP leader)? What did they say about the BJP when they formed the KJP and BSR Congress respectively? Mr Yeddyurappa had said that even his dead body would not go near the BJP office. But where are they now and what are they talking about?” he asked, adding that in politics, situations often changed and people, who were once enemies, did mend fences.

“This coalition was not formed for any selfish motive or even for Mr Gowda and Mr Siddaramaiah. It is for the good of the people,” the Chief Minister declared.

All in family: Award from CM son to dad

Former Prime Minister, H.D. Deve Gowda has been selected for Valmiki Award- 2018-19 and he will receive the award from none other than chief minister and his son, H.D. Kumaraswamy at a function organised near LH on Wednesday.
Through a statement, social welfare minister, Priyank Kharge announced this on Tuesday.

An expert committee was constituted under the leadership of Justice H.N. Nagamohan Das and the committee scrutinised the names and finalised Mr Gowda’s name, Mr Kharge said.

Mr Kharge went to Mr Gowda’s residence on Tuesday morning and personally invited him to accept the award. The function is organised in a banquet hall, Vidhana Soudha, near the Valmiki statue. Mr Gowda accepted the invitation, the social welfare department officials said.