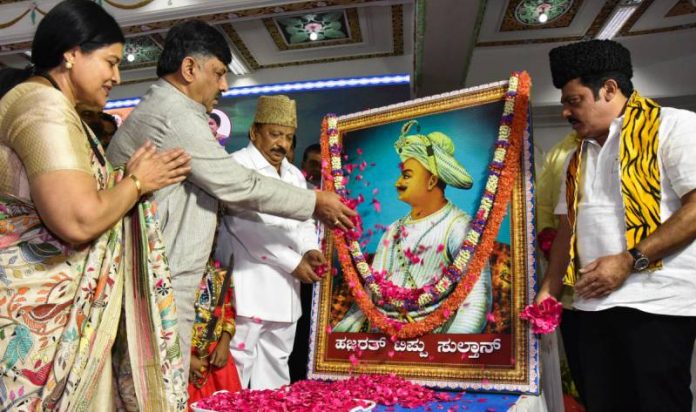 “Tipu Jayanti was celebrated peacefully on his birth anniversary under tight security despite protests by BJP leaders and cadres in the state,” a Kannada and Culture Department official told IANS.

State Chief Minister H.D. Kumaraswamy of the JD-S and Deputy Chief Minister G. Parameshwara of the Congress were conspicuously absent at the main event, held in the legislative building in the city centre.

“Kumaraswamy is unable to attend the function, as he is taking rest on doctor’s advice,” said a statement from the Chief Minister’s office, explaining his absence and denying that he kept away from the event due to the fear of losing power, as he is against such blind beliefs.

Parameshwara also could not be present at the main function as he was out of the country.

“Parameshwara could not be present at the function as he flew to Singapore to visit our ailing party leader Chennigappa, who is undergoing treatment in a private hospital there,” state Water Resources Minister and Congress leader D.K. Shivakumar told reporters after inaugurating the Jayanti.

JD-S Ministers, however, kept away from the day-long state-sponsored celebrations, held in all the district headquarters, including Ballari, Mysuru, Kodagu, Mangaluru, Raichur and Hubbali.

Eldest son of Sultan Hyder Ali, Tipu (1750-1799) is also hailed as the “Tiger of Mysore” for fighting the British East India Company’s advances and protecting his kingdom.

Tipu was killed in a battle with the British army in 1799 while defending his fort at Srirangapatna near Mysuru, about 120km from here.

“Tipu’s birth anniversary is being celebrated all over the state. His progressive measures in administration and quest for innovation are commendable,” said Kumaraswamy in a message on the occasion.

In a related development, about 70 BJP men, including its Virajpet legislator K.G. Bopaiah, were detained by the police at Somwarpet in Kodagu district for protesting against the event.

“The BJP protesters were taken away from the function venue and detained due to ban order imposed in the district to maintain law and order,” a police official told IANS from Madikeri, about 270km from here.

Commenting on the absence of the Chief Minister and his Deputy at the main event, the BJP’s state unit said in a tweet: “CM Kumaraswamy missing! While the Congress-JD-S coalition government is celebrating a tyrant Tipu, the CM himself goes into hiding, what is the point of celebrating a fanatic when CM himself abandons a government function.”

“Glorifying a mass murderer for vote bank clearly shows mindset of this government,” said the opposition party in another tweet.

The Congress began celebrating the birth anniversary of the 18th century ruler in 2015 to honour him as a patriot.

Zamir Khan, along with a few Muslim clerics including Hazrat Maulana Saheb Rasadi Sagir Ahmad Khan visited former Chief Minister and senior Congress leader Siddaramaiah’s official residence in the city and presented him a sword and a traditional headgear similar to that worn by Tipu.

“We are celebrating Tipu’s Jayanti to mark a patriotic, secular, and a generous king. Tipu is not confined to any one religion, but to the nation,” tweeted Siddaramaiah later.

Accusing the BJP of politicising the event, Shivakumar said Tipu was a great warrior who had struggled for the freedom of his kingdom.

“History of Tipu and his greatness was endorsed by President Ram Nath Kovind while addressing us on October 25, 2017 in the same place (Vidhana Soudha). I don’t know why the BJP is making an issue of it,” said Shivakumar.