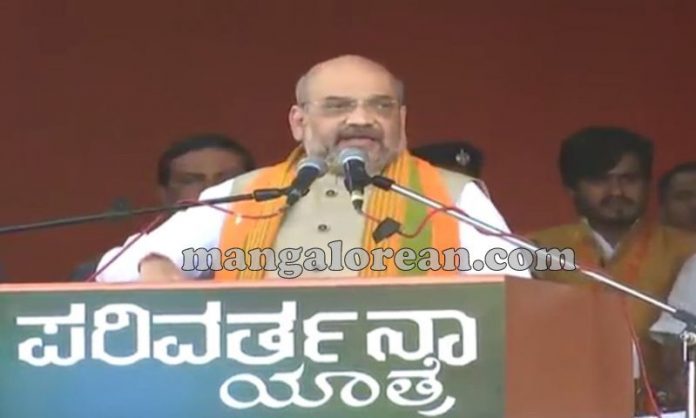 Bengaluru, (DC): The inauguration of the much talked about 75-day Karnataka Nava Nirmana Parivarthan Yatra of the state Bharatiya Janata Party (BJP) failed to live up to the hype.

Flagged off by party national president, Amit Shah here on Thursday, a poor turnout of party workers put a dampner on the event attended by a galaxy of state and Central leaders.

While the party had expected nearly three lakh workers to attend the rally, it saw a moderate turnout with three-quarters of the nearly one lakh chairs laid out remaining empty.

BJP leaders were seen repeatedly requesting party workers taking shelter under trees to come inside and sit on the chairs, but they preferred to avoid the hot sun.

Upset at the poor turnout, BJP leaders accused the state government of preventing party workers from attending the rally on bikes.

Some like MP, Shobha Karandlaje and Mr Aravind Limbavali claimed that the district administrations of Chamarajanagara and Mysuru had prevented party workers from attending the rally.

Others said thousands of party workers were held up in the traffic.

Seeing the sprinkling of workers at the event, senior leaders, Muralidhar Rao and R.Ashok looked visibly tense and the programme, which was scheduled to start at 11 am, kicked off an hour- and -a -half late at 12.30 pm instead.

State BJP chief, B.S.Yeddyurappa led the yatra towards Kunigal taluk in Tumakuru district from where it will proceed to Turuvekere, Chiikkanayakanahalli, Gubbi and Tipturu on November 3 and 4. Mr. Yeddyurappa is expected to address three or four public meetings at each taluk headquarter.

Flagging off the yatra, Mr. Amit Shah presented him a green shawl, the trademark of the farmers, in an obvious attempt to a strike a chord with them and win their support in the run- up to the coming assembly polls. Mr. Shah also released an app on the occasion to provide information about the yatra , its route map and public meetings.

Chennapatna MLA and Congress leader C.P. Yogeshwar and Kuduchi MLA Rajiv of the BSR Congress, joined the Bharatiya Janata Party on the occasion.