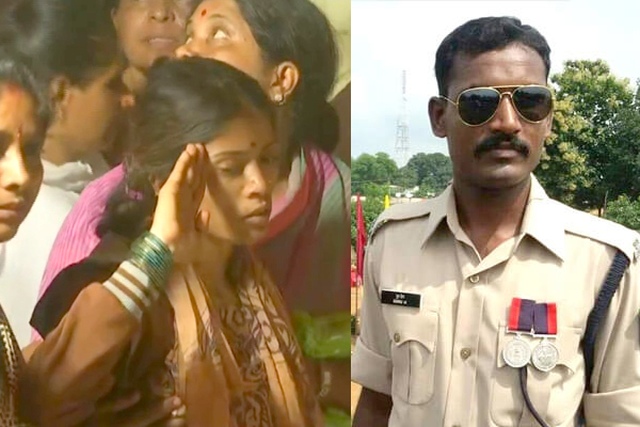 Mandya: The last rites of Karnataka’s slain CRPF trooper H Guru was held in his native Gudigere in Maddur taluk of Mandya district.

His remains arrived from New Delhi to Bengaluru’s HAL Airport in a special aircraft of the Indian Air Force. The tri-coloured cortege with Guru’s body was lowered from the IAF’s AN-32 transport aircraft at the state-run HAL airport in the city’s eastern suburb and driven in a flower-bedecked military truck to Gudigere village in Mandya, about 100 km from the city.

Along the way, the convoy was stopped several times delaying the funeral by over two hours. Thousands of people paid their tributes to the slain soldier along the way.

Constable (General Duty) Guru, 33, was among the 49 Central Reserve Police Force (CRPF) troopers who died on Thursday near Awantipora in Jammu and Kashmir’s Pulwama district in a terror attack on a bus in which they were travelling in a convoy to Srinagar from Jammu.

The funeral was attended by Chief Minister Kumaraswamy along with officials of the CRPF. Guru’s family members, including wife Kalavathi, father Honnaiah, mother Chikka Thayamma, younger brothers Madhu and Anand were inconsolable over his sudden death.

According to his relatives, Guru was at home last week on leave and left for Jammu and Kashmir on February 10.

The Chief Minister has assured the bereaved family of providing a government job to Guru’s widow Kalavathi and compensation for his supreme sacrifice in the service of the nation.

Guru joined the CRPF in 2011 after serving in Jharkhand as part of the 94th Battalion. Guru belonged to the 82nd Battalion of the CRPF and was posted in Srinagar. He had spent fifteen days at his home in Gudigere and is fondly remembered by his friends and family members.

He was travelling along with his fellow troopers from Jammu to Srinagar when the devastating attack took place in Pulwama district of Jammu and Kashmir.