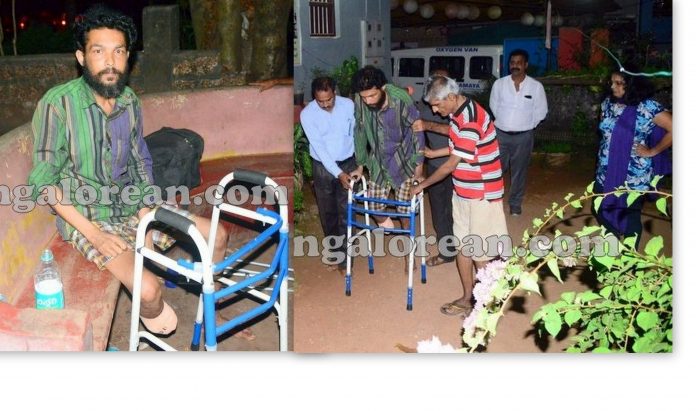 Karunamaya Comes to the Rescue of Destitute When 2 other City NGOs Deny Help!

Mangaluru: Even though there are a couple of NGOs situated in Mangaluru who come to rescue of the destitute, poor or homeless, during certain cases when someone needs REAL HELP, they come up with certain reason and restrictions, thereby putting the helpless person into being MORE HELPLESS. Here is the story- A young man with diabetic conditions had his right leg amputated and also had undergone open heart surgery. On December 7, renowned Advocate and Marriage Registrar Stanley D’Costa called a social activist, founder of Parivarthan Charitable trust and chief of Mangalorean.com, Violet Pereira about a man sitting in the Mallikatta old bus stand desperately needing help and requested to provide him with shelter.

Without wasting any time, Violet immediately called one of the NGOs taking care of the destitute. The manager of the NGO said that he would send someone to pick the man from the bus shelter since he had other engagements. On December 8, Violet again received a call from the advocate early in the morning saying that the man was still lying in the bus stop. In the meantime, Team Mangalorean visited the spot to learn about the man and try to help him.

On December 8, Violet again called the same NGO several times to check if it was possible for them to help the person but the calls were ignored. Later, she tried another NGO and their reply was that they take only mentally unstable persons. As the saying goes, “When one or two doors close, ten doors will open”. Finally, Violet contacted social activist Alwyn and explained to him the plight of this man lying in the bus stop with health issues. Alwyn provided the contact number of another little known NGO that has been helping the helpless for 5 years without any publicity and informed them about the man.

Team Mangalorean, after speaking to the man got a few information on him, where he said, “My name is Sanmith and I was working as a car driver. Being diabetic, one day I got hurt in the leg and a few days later the wound got worse. So I got admitted to the hospital. When the doctors checked me, they said that the wound had developed into gangrene and that the only option was to amputate my leg. I was bedridden in the hospital for 5 months. Again, a month ago I got admitted to the hospital with a severe cough, and the doctors said that I had a heart problem. Ten days ago, I got discharged from the hospital and since then I did not take any medicine. And this is my present situation. All I need is help from a Good Samaritan to provide me with shelter and food.”

Elias Coelho along with his wife Savrine have been running an NGO called Karunamaya in Jeppu Kudupady road from the past five years. Elias said that he would accommodate the man and would take him to the ashram on December 9. But seeing the condition of the person, Team Mangalorean along with Advocate Stanley arranged and dropped him at Karunamaya on December 8 night.

Speaking to mangalorean.com, Elias Coelho, Managing Trustee of Karunamaya, said, “We have worked in Kuwait for 12 years. After we came back from Kuwait in 2000, we rented this house. Being very religious, we were spending most of our time in prayers. In 2012, while I was returning home after attending a prayer meeting, as I passed by, I saw a man lying in the waste dump in Jeppu. As I was nearing my house, I felt that I had done wrong by not helping the person who needed help. I turned back, picked the person from the waste dump and brought him home and now he is in the Ashram. Since then, I thought it to be God’s work and have continued to help the helpless. In 2013, I rented this house and started to take care of the destitute after obtaining a license. Recently, we have shifted 15 persons to our Permai Ashram, which was opened in November 2018.”

It is learnt that the man is doing fine and is happy at the Karunamaya Ashram. Team Mangalorean thanks Karunamaya Ashram for coming to the aid of a man who desperately needed help. May God bless you and help you to continue your good work.