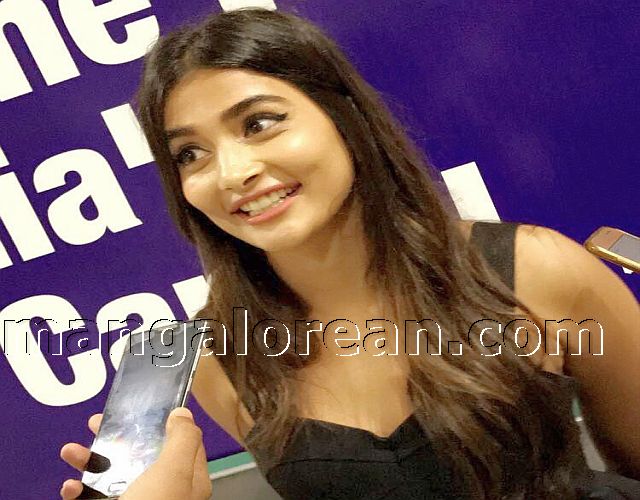 Mangaluru: Indian model and actress Kudla’s origin Pooja Hegde who has appeared in mainly Telugu and Hindi films, was spotted at Mangalore International Airport on her way to her ancestral and parents hometown-Karkala for a special pooja. A former beauty pageant contestant, she was crowned as the second runner-up at the Miss Universe India 2010 competition, before going on to make her acting debut in Mysskin’s Tamil superhero film Mugamoodi (2012). Pooja then featured in the Telugu films “Oka Laila Kosam” and “Mukunda”(2014), while signing on to feature as the lead actress in Ashutosh Gowariker’s Hindi movie Mohenjo Daro (2016). Her recent movie is 2017 DuvvadaJagannadham in Telugu.

Even though Pooja was born and brought up in Mumbai to Manjunath and Latha Hegde, she quite often visits her ancestral and parents home in Karkala. Her mother tongue is Tulu, but she is fluent in English, Marathi, Kannada and Hindi. It is learnt that during her time at college, she revealed she gained confidence by helping out with her mother’s network marketing business, improving her networking skills. She regularly sought to enter in intercollegiate competitions, participating in dance and fashion shows. And this has made her to reach greater heights in acting in movies and participating in fashion shows.

Speaking to Team Mangalorean at the MIA, Pooja Hegde said, ” It’s always nice to be in Mangaluru and visit my hometown Karkala, where I get to interact with my ancestors, relatives, and family friends. Above all, I also get to savour some of the Kudla delicacies which you don’t find it quite authentic and traditional in Mumbai. In these two days of my stay here, I will try some of the best food that the coastal town has to offer. I would also like to thank my fans who have been very supportive in patronizing my movies, and I look forward to their support and encouragement in my future roles, either in Bollywood or Tollywood movies. “

Suhan Alva, the Founder and present Coordinator of “Cause 2017” – a fundraising event to raise money for old-age homes and Ashrams in the area, organized by the St Aloysius PUC students, also interacted with Pooja Hegde, where she was kind enough to promote the event through her announcement made via media. After the Puja ceremony at her ancestral home today, Pooja Hegde will be leaving back to Mumbai by flight tomorrow.

PS: Alfie, do us a favor. Stop using that boring oft repeated word kudla. It is plain irritating. Just call it Mangalore. Will you?