Association of Consulting Civil Engineers (India), Mangalore Centre has recognized ‘Solitaire’ residential project of Land Trades Builders & Developers with the prestigious ‘ACCE (I) MLR – ULTRA TECH AWARD 2019’. The award is instituted by ACCE (I), Mangalore Centre in association with Ultra Tech Cements to foster positive competitive spirit among engineers, builders, contractors and owners so that the best of quality, construction practices and concrete utility prevails.

The award was handed over to Land Trades during the glittering AWARDS NITE program held at Milagres Hall Complex, Mangalore on 8th of January 2020.

One of the tallest high rise buildings of Mangalore, ‘Solitaire’ is widely admired and hailed as a tribute to excellence and quality. It had only recently received CRISIL’s highest real estate project grading of ‘7 Stars’, indicating maximum potential of the project for being delivered as per agreed specifications and assured time. Land Trades is also the only firm of Mangalore to enjoy DA2 Real Estate Developer rating from CRISIL.

A 32-storey marvel of architecture, Solitaire is a one of its kind luxury residential development boasting of a wide array of modern comforts and facilities like Club House with Swimming Pool, Jacuzzi, Sauna and Steam Room, Fully Equipped Gym and Indoor Games Room. The project is situated on Hat Hill and gives a commanding view of the Arabian Sea. Solitaire is an exclusive abode and an eco-friendly project comprising 143 apartments available in a choice of 2BHK, 3BHK, 4BHK apartments and 5 BHK Duplexes. The eco-friendly features of the project include rainwater harvesting, centralized waste segregation and sewage treatment plant and solar energy generation.

Solitaire was launched with Bhoomi Pooja which was performed on September 29, 2014. Subsequently, the execution of the project was entrusted to MFAR Constructions. Land Trades has completed construction work on Solitaire as per schedule and the building was formally inaugurated on December 29, 2019.

“I am delighted to know that our project ‘Solitaire’ has been accorded the ‘ACCE (I) MLR – ULTRA TECH AWARD 2019’. This acceptance given by our professional peers and domain experts is a great endorsement of our quality standards, assuring that we are on the right path. This award strengthens our resolve to strive for excellence always,” said K. Shrinath Hebbar, proprietor of Land Trades.

Responding to the increasing demand for low-cost housing Land Trades has launched ‘Habitat ONE54’ affordable budget homes with 60 sq. mts. carpet area in Derebail locality of Mangalore with attractive community living options. The residential development comprises of four blocks, each with Ground plus Five Floors with two basement floors for car parking. There will be a total of 154 flats, with 124 two-bedroom flats and 30 single bedroom apartments. 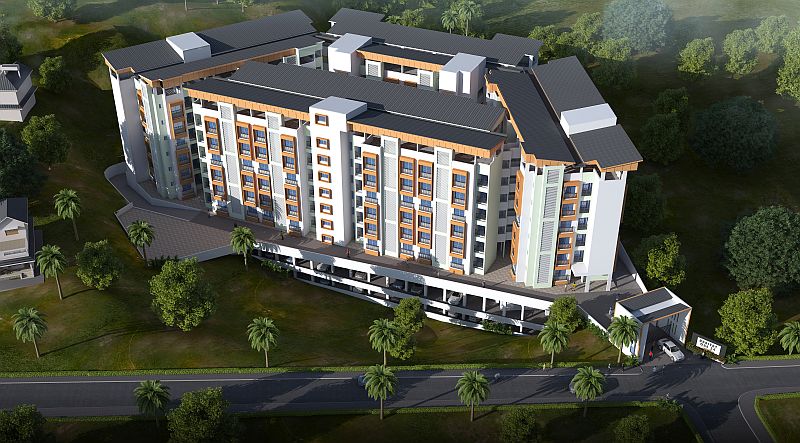 Habitat ONE54 conforms to the requirements of Pradhan Mantri Awaz Yojana ‘Housing For All’ (Urban) Scheme under Low Income Group (LIG) category. Housing loans availed under this scheme enjoy credit-linked interest subsidy @Rs. 6.50% for up to 15 years and subsidy amount of Rs. 2.20 Lakhs.

For those who love the sea, Land Trades offers ‘Emerald Bay’ at Surathkal. This spacious beachside property with resort-like features offers independent house sites best suited for villas in a choice of sizes ranging from 5.5 cents to 15 cents. With abundant greenery and uniquely designed landscaping and a fully developed park, this will be nature’s haven and a much sought after residential layout.

Responding to the emerging needs of the market, Land Trades is all set to launch two new projects in Mangalore. ‘Nakshatra’ will be a premium residential development coming up in peaceful residential locality at 8th Cross, Gandhinagar. ‘Anantessh’ will be a modern commercial complex situated close to Flower Market, Car Street. Both projects are undergoing final touches on the drawing board and will be launched soon.

Land Trades Builders & Developers is a premier property developer of Mangalore having a track record of 27 years in promoting successful projects. Founded by Mr. K. Shrinath Hebbar in the year 1992, the ISO 9001:2015 certified firm is known for the timely completion of its projects. Over the last two decades, the firm has promoted a series of mega projects such as Maurishka Palace and Atlantis which have become prominent landmarks in Mangalore’s skyline.

The firm has well-streamlined systems to ensure quality at all stages of project management right from design to material selection to construction and final finishing. The company uses only the best-branded products in its projects. All materials, products and processes have to meet stringent qualitative standards to find a place in buildings constructed by us. Furthermore, the company’s quality protocol includes third party authentication by Bureau Veritas for transparency and efficiency.