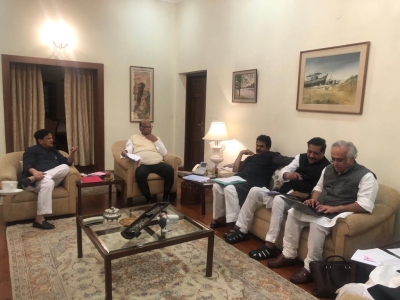 New Delhi:  Amid political uncertainty in Maharashtra, even 21 days after the Assembly election results were declared on October 24, the final deal between the Congress, the Nationalist Congress Party (NCP) and the Shiv Sena was sealed at 6 Janpath, residence of Sharad Pawar, which is just 100 meters from Sonia Gandhi’s residence, after a several rounds of parleys between the leaders on Wednesday.

The series of meetings begun with the first at the Congress headquarters at 4.30 p.m. when senior Congress leaders Mallikarjun Kharge and K.C. Venugopal had a detailed discussion with former Mahrashtra Chief Minister Prithviraj Chavan, Balasaheb Throat and Arif Naseem Khan.

After discussing the proposal, then went to see Congress interim chief Sonia Gandhi at her residence at 5 p.m. There they were also joined by senior leaders, like Jairam Ramesh, A.K. Antony and Ahmed Patel.

The Congress leaders after detailed discussions with Sonia Gandhi for over 25 minutes left for the the NCP chief’s residence.

It was at this meeting that Sonia Gandhi gave her nod for alliance with the Bharatiya Janata Party’s (BJP) pre-poll alliance partner Shiv Sena in Maharashtra.

At the over 3-hour meeting, Ramesh noted the points to be included in the draft common minimum programme and the agenda for alliance. In between, the Sena leaders were also invited for parleys, sources said.

After the marathon meeting, Patel, Ramesh, Venugopal and Kharge went to see Sonia Gandhi at 8.30 p.m.

Soon after that Chavan and Malik announced that the new government in Maharashtra would be formed by jointly by the three parties.

At 9.45 p.m, the four senior Congress leaders returned to Pawar’s residence to meet the waiting NCP leaders. This meeting over dinner lasted for more than one-and-half hours.

The next came Patel’s announcement, “Everything is positive. We will meet again to fine-tune the arrangement.”

On Thursday, there will be meeting in Delhi. On Friday, the three parties will meet again.