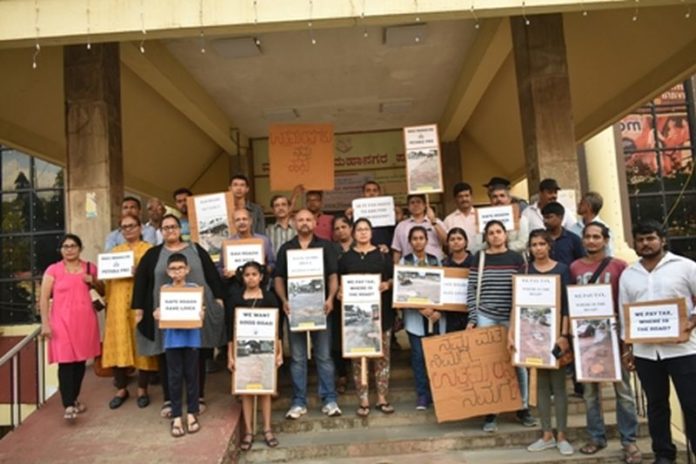 Make Mangaluru Pothole Free! Frustrated Citizens of Mangaluru along with members of MCC Civic Group stage Silent Protest near MCC Building holding placards highlighting the pathetic condition of the City roads filled with potholes/craters? With messages like -“We Pay Taxes, Where Are The Good Roads?”; “Safe Roads-Save Lives”; “Make Mangaluru Pothole Free”; “We Want Good Roads”; “Is It Too Much To Ask For Good Roads?”; “Bad Roads, No Votes”etc brought awareness among the public about the dilapidated City Roads in the so called “SMART CITY?”

Mangaluru: There is Summer, Monsoon and Winter seasons, but in Mangaluru we have POTHOLE season. Although it’s bad to drive on the main City streets, stricken with numerous potholes — similar problems have been experienced by Mangalureans driving on the side streets and lanes.. It’s treacherous time — It’s once again pothole season in Kudla. The City streets are decorated with potholes, and I bet between each mile there are chances that you’ll come across potholes. Mangaluru roads have started resembling the craters on the moon? 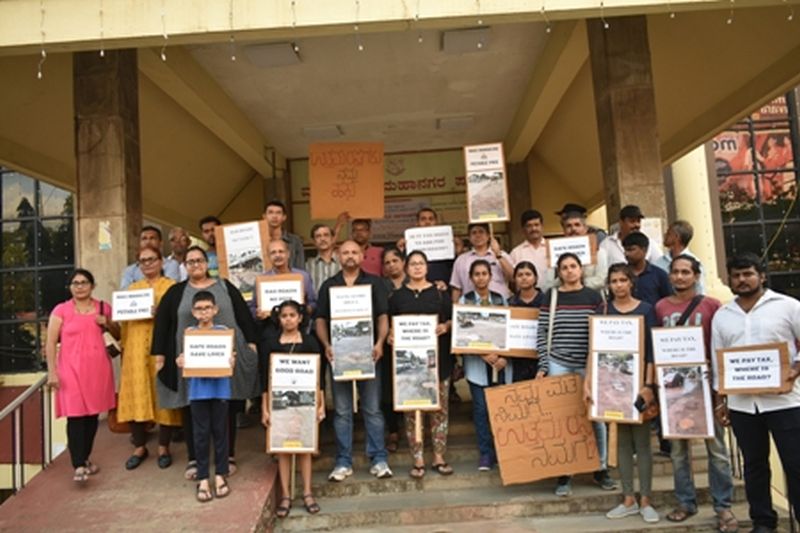 It happens again and again and again, year after year. Heavy rains, heavy traffic and alternating periods of weather have scarred local streets and the potholes pop up — and this has formed a worse-case scenario for repair crews who are struggling to find and fix all the emerging potholes. But are they doing the job right. I don’t think so. Throwing some loose stuff in a hole and just hoping the traffic driving over it will fix it, will not serve the purpose. The evidence now says otherwise. I think the only way to solve the current pothole mess is to lay a two-layered concrete road with a seal coat but the problem is, our authorities at MCC or district administration are busy playing blame games. 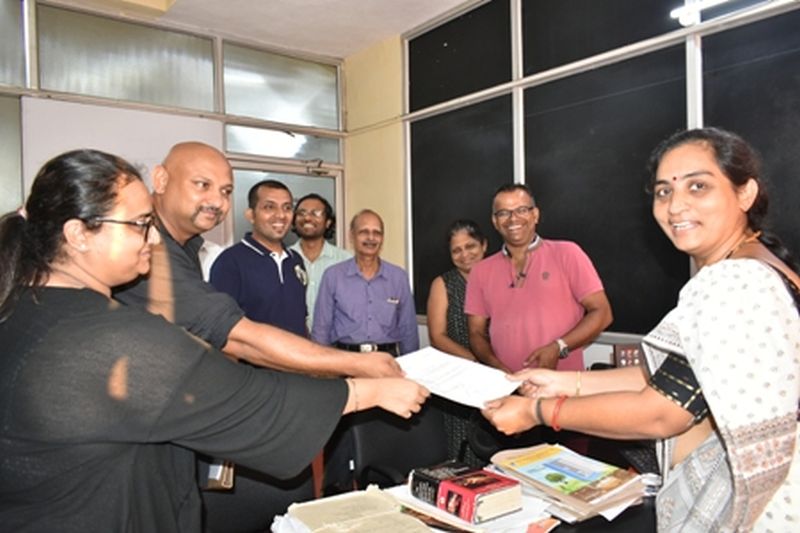 As long as cheap quality tar is being used and layered too thinly, we will continue to have these problems every year. It’s an obvious pattern and I wonder why nobody is looking into this, or better yet, our city officials should visit other metropolitan cities in India or other countries and see how they are coping with this matter. Without any delay, MCC should undertake a major exercise to refurbish City’s potholes. Driving on Mangaluru streets, and for that matter, even on outskirts of the City, is like an obstacle course. Drivers keep swerving and maneuvering to make sure they miss every pothole. These potholes have also worsened the chronic traffic jams which Mangalureans face everyday, especially near Padau Road, Kavoor junction, Kulshekar/Kalpane stretch, Bunder, Kankanady Pumpwell, Bikkarnakatta junction, and many other places. Anyone who has had the misfortune of commuting on the stretch from Padau junction towards Airport/KPT road or Padil will testify what a great pain the ride is – literally – owing to the numerous potholes that punctuate the road. I bet a ride on this stretch is akin to a ride on a ‘ camel’s ‘ back- just bumpy! 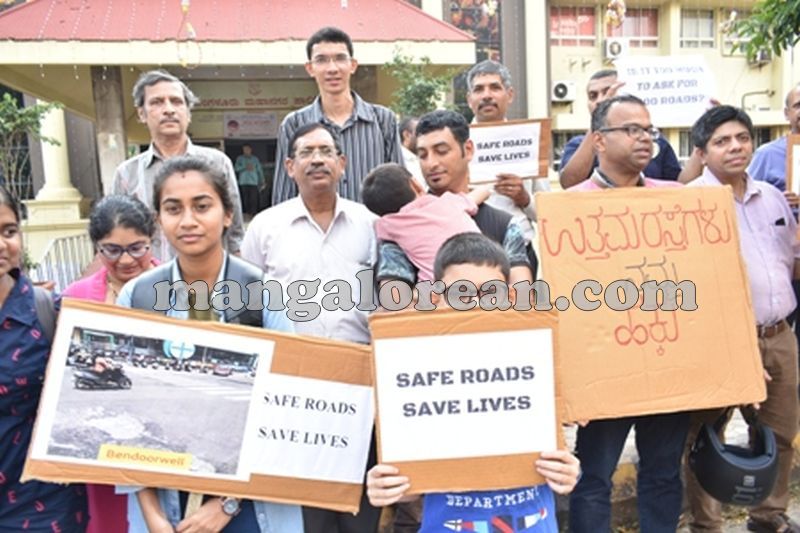 Incessant rains and pothole-ridden roads has left many city streets choked over the past few weeks. Every commuter in the City has nursed the after-effects of juddering over the hundreds of potholes of all shapes and sizes. The civic authorities desultory efforts to fill them only result in these craters reappearing sooner rather than later. Sometimes it’s dangerous for vehicles to pull out of the potholes promptly, particularly at night. These potholes have become a nuisance for motorists, especially two-wheeler riders. But the concerned authorities have turned a blind eye to this hazard. Even some of the roads with potholes leading to major hospitals, they have become a major obstacle for ambulances too. 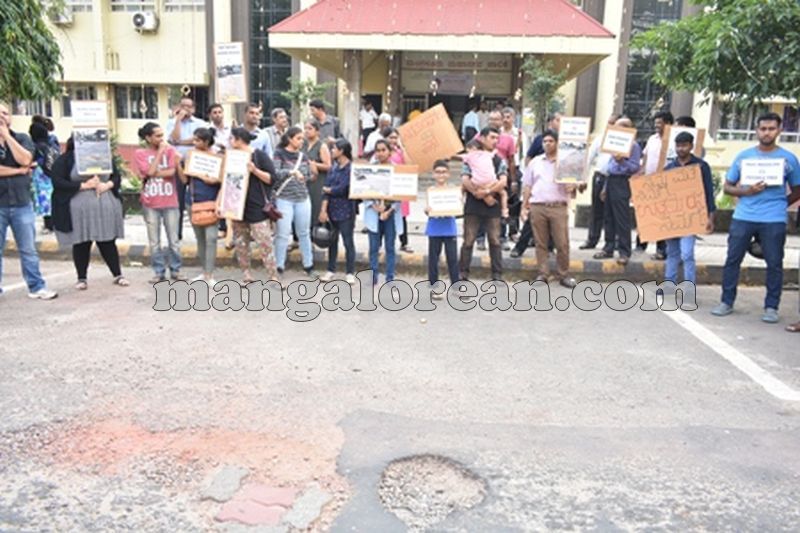 Potholes aren’t just a nuisance for drivers; they also constitute dangerous safety hazards that can produce substantial damage to vehicles, force drivers to veer suddenly in traffic, or even cause the driver to lose control of a vehicle after contact. The gaping streets can also damage a car’s alignment and suspension system. The city crews should take quick action to fix the potholes before they get deep and worse — thereby avoiding severe driving hazards and vehicle damages. 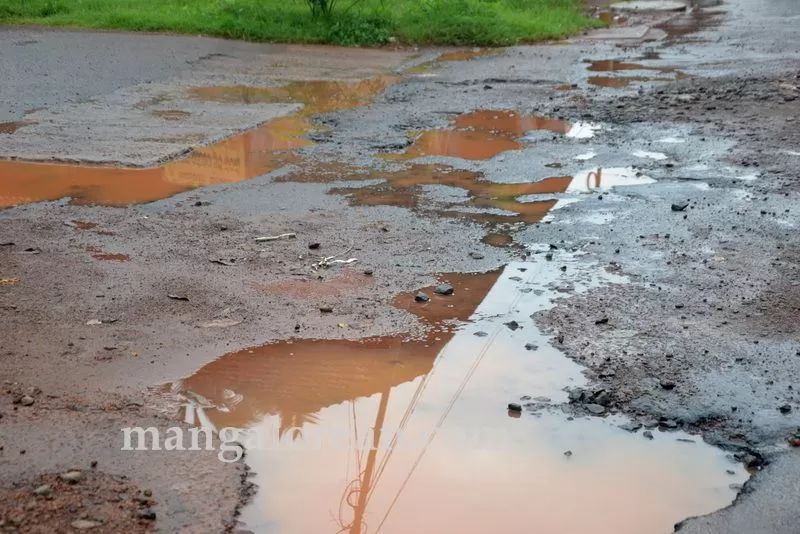 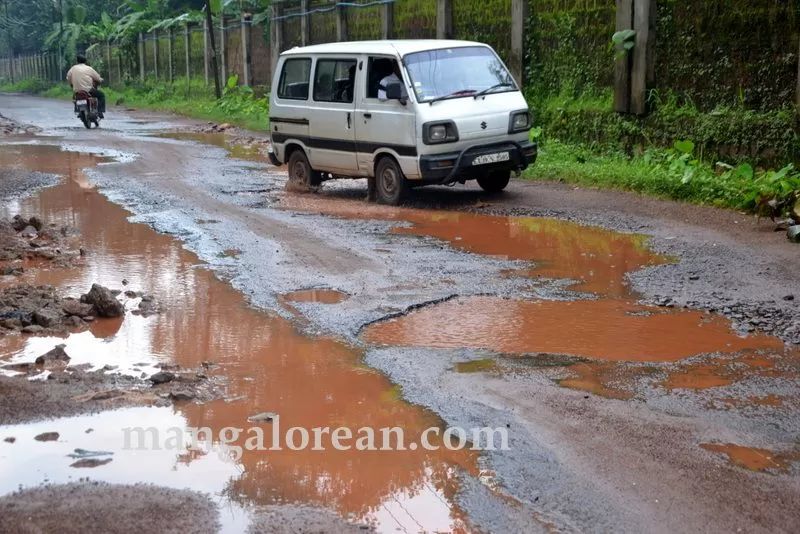 Enough is enough, after bearing all the frustrations due to these potholed roads, a bunch of citizens joined the members of MCC Civic Group, who fight for the civic issues, in staging a Silent Protest in front of the Mangaluru City Corporation, holding placards with messages highlighting the inconveniences faced by the public due to dilapidated and potholed City streets. Members of “Climate Strike”, a group which brings awareness on the climate crisis, affecting our fast paced and unsustainable lifestyle that’s damaging the planet, also joined in today’s protest. 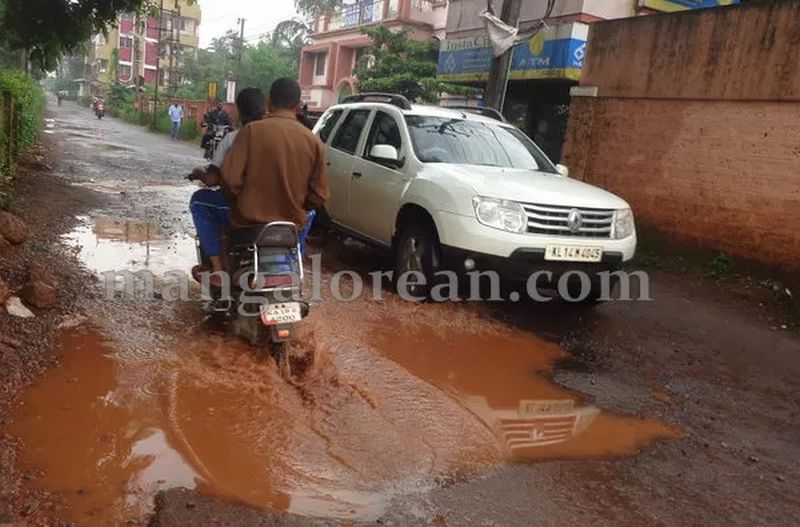 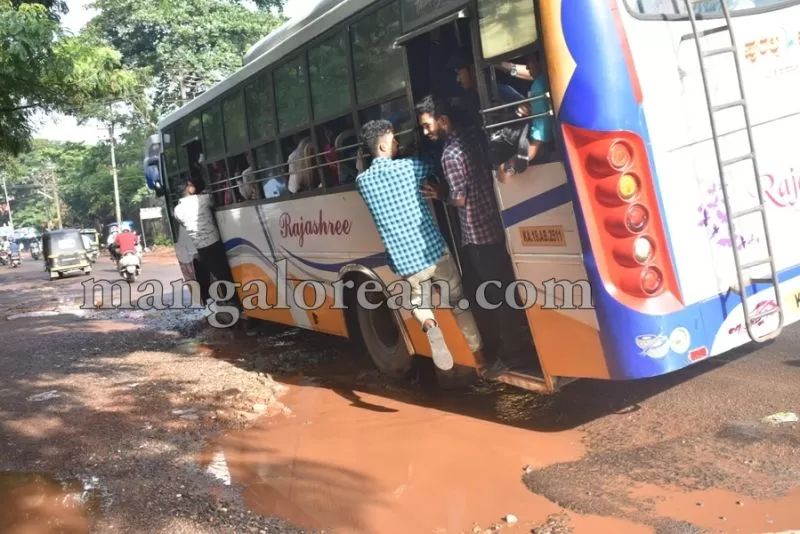 A member of this Group speaking to Team Mangalorean said, “The purpose of Climate Strike is to raise awareness in public and to show that we care for the future of our city and the world. It’s to tell our leaders that the people want better options that are good for our planet. These Climate Strikes won’t solve the climate crisis alone, What this moment can do is demonstrate that people are no longer willing to continue with business as usual. Being a coastal city, Mangaluru is already facing the brunt of climate change. Irregular rains, sea erosion, plastic pollution are few of the problems the city deals with. Our house is is on fire – let’s act like it. We demand climate justice for everyone.’ 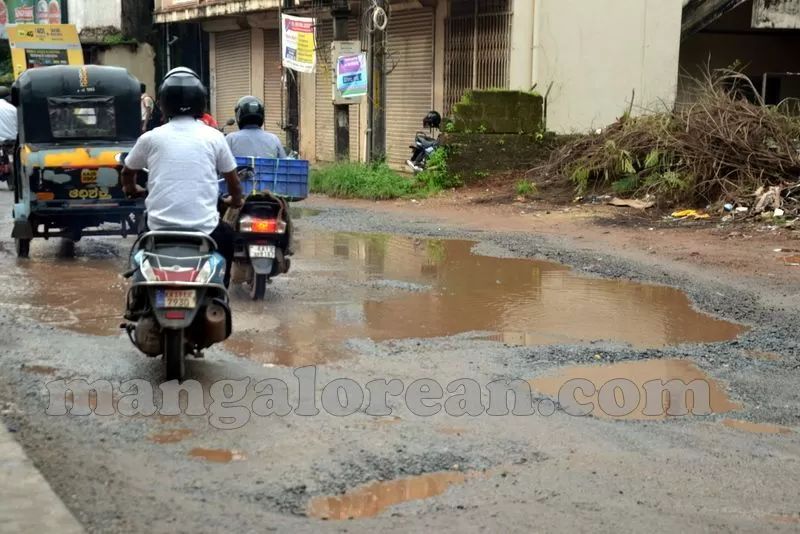 Yet another frustrated member in this Silent Protest said, “My mother feels the brunt of the terrible potholed stretch of road from Kulshekar all the way to Nanthoor, when she has to travel to Attavar to see her doctor. The whole journey on this pothole filled road is so inconvenient and tired some, she feels so sick when she returns home. Does any one care for the safety and health factors of elderly people? What has the City done, other than boast about the status of Smart City? We need good leaders and systematic governance to run this City, so that we can live happily without any inconveniences”.

Yes, the roads are bad out there. Laying the potholed road with loose jelly stones not properly mixed with cement, has created a safety hazard, especially for the two-wheeler riders, who skid while moving on this gravel road. Is this what you call a Smart idea of the so called Smart city? Our present roads look like dirt tracks, fit for dirt track racing, and definitely not for smooth drive or ride. Bunch of our City roads are in SHAMBLES, PATHETIC, very DISGRACEFUL, and totally DISASTROUS?

How can a city which boasts about its cleanliness standards among other cities in India, and also about its Smart City status, can neglect city roads used by all sorts of citizens and motorists. Even the pedestrians are having a hard time walking on the potholed and water filled road, since the footpaths are dangerous to walk. Throwing some loose stuff in a hole and just hoping the traffic driving over it will fix it, didn’t serve the purpose. Instead of fixing the bad roads first, our MCC officials are busy resurfacing inner-lanes with brand new interlock bricks. But when it comes to fixing the bad roads they are slow and careless.

How can we ever call this City a SMART CITY, when we see a bunch of dilapidated and potholed roads existing at every nook and corner- and our Hard Working and Dedicated MCC Officials and Engineers are enjoying their days working hours in the comfort of their Air Conditioned cabins. Bah humbug! Driving on Mangaluru streets, and for that matter, even on outskirts of the City, is like an obstacle course. Arjun Mascarenhas – the co-founder of MCC Civic Group, and Ashley Fernandes, a frustrated resident of Kulshekar area, also spoke and briefed about the future plans as to how this issue can be rectified. A memorandum was handed over to MCC Commissioner Shanady Ajith Kumar Hegde, and also to Ms Gayathri Nayak- the MCC Deputy Commissioner (Revenue), who both assured to take necessary steps with the concerned authorities, and do the needful at the earliest.

So while waiting for these roads to be restored for a smooth ride, just brace yourself because it’s once again pothole season in Mangaluru. And for sure, the MCC authorities will not take any action, until a few tiny cars like’ Maruti Suzuki Alto’ or two-wheelers get swallowed by some of these mega-potholes? Until then bear with the potholes or curse someone at the MCC— and still keep driving or riding safe. A job well done by MCC Civic Group and the bunch of these citizens for alerting the MCC Officials about the pathetic condition of our city potholed roads.