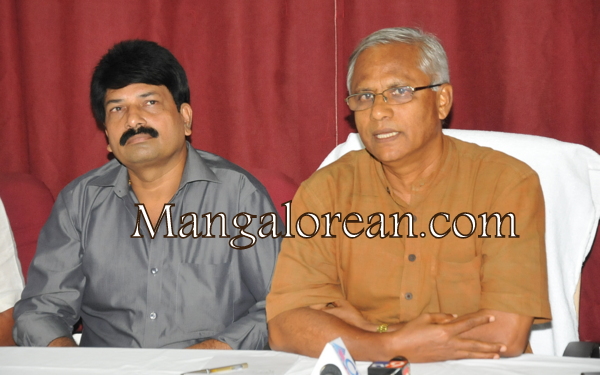 Mangaluru: MLA J R Lobo held a press meet in connection with the raging issue of Yettinahole diversion project, at his office premises here, on August 31.

Addressing the mediapersons, Lobo said, “The people of DK district are worried about the Yettinahole project. During my term as an MLA, whenever I received an opportunity to discuss about the district, I have given my opinion. I have also mentioned in the assembly that the decision to commence Yettinahole project has been taken without taking the people of Dakshina Kannada into confidence. In this regard, a meeting was called with the leaders of Mangaluru and Udupi.”

“I have also discussed about the implementation of Yettinahole project in the assembly. Is there any harm from the project to the people of DK? And being a huge project, was the availability of water confirmed or not? We are concerned about those who will be benefiting from this project; yes, Kolar district is facing severe water scarcity. There is no water to drink. Even mango trees have dried up in Kolar due to lack of rains. The government should take measures to solve their problems. I have informed the government to study the entire project, its pros and cons.”

The experts of the Yettinahole project said that they will not take water from Netravati. They will divert the water from Kumaradhara river. There will be no reservoir. Only in the rainy season for three months, they will lift the water. For Mangaluru, after February there will not be water in the Netravati river and we will be depending on the Kumaradhara river. When we asked the government, the government said that they will call for a meeting. We have concern for Chikkaballapur and Kolar districts. If the project will not harm the western flowing rivers and coastal areas, we will support it but if the project will effect the district, the government should think over it, he said.

He further said, “A series of vented dams should be built along the Western flowing rivers to increase the ground water level so that the people who are depending on agriculture will not face water crisis. Even the people of DK should get water. The government should provide funds to build the vented dams. Experts should confirm that there won’t be any problem for the people of Dakshina Kannada because of the Yettinahole project.”

When asked why the MLAs or ministers did not visit the Yettinahole project site and why the districts ministers seemed to not be aware of the project, Lobo said, “I will request the CM to visit Mangaluru and have discussion with the people of DK. If the project will harm the people, I will not support it.”

When asked by some mediapersons to take the lead and protest against the Congress government, Lobo said, “I will not lead the protest. Let us sit with the government and discuss the issue. As a representative, I know how to represent the government. I have discussed the issue with the major irrigation minister, all the concerned authorities and in the assembly. I will bring the project to the notice of the government once again and tell the government to take the people into confidence.”

This report sums up everything wrong with this MLA. I initially liked and supported this guy as he appeared to have a good background and sounded honest. Now, he sounds more and more like Manamohana Singh. Let’s look at some of his statements: 1. ““I will request the CM to visit Mangaluru and have discussion with the people of DK” in response to questions on if he had visited the location!! This reminds me the old saying – “ooota aayitha andare, mundaasu muvathu mola”. LOL Is he trying to hide the fact that he didn’t even visit the location? 2.… Read more »