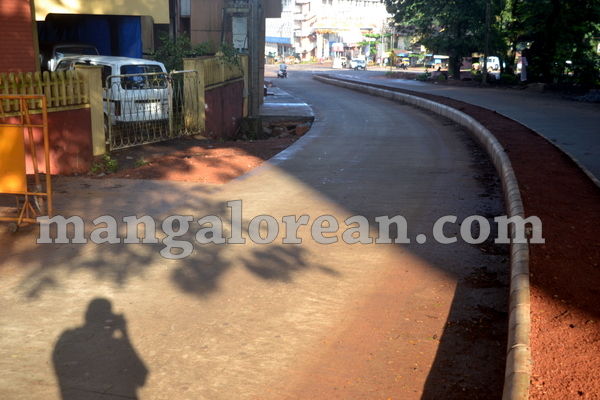 Mangaluru: MLA J R Lobo along with former Mayor Mahabala Marla who had inaugurated the concrete work of the St Agnes-Mallikatte on February 16, 2015, a project costing the tax payers around Rs 1.4 crore has not been completed to the needed standards, in other words “incomplete” and a “Bad Job”- and motorists have already started using this stretch-no one knows whether this road is fully completed or whether it is officially open for the motorists. Some buses are still using the diversion road.

Mud, jelly stones,etc piled up on this road stretch tell a story of utter neglect. The haphazardly done work had left citizens wondering if the authorities will finish the work soon. As always when new roads are constructed in town, it lacks footpaths – and this road is yet another example- and we are talking about Mangaluru being a “Smart City”. The workers have even left the median incomplete- broken at few spots already. There is no hint on when the work could probably get completed. Work on this road has already stopped.

When I talk about “incredible shrinking road” – it means that the newly built road is broader at one end and becomes thinner at the other end. At the beginning of the road near Vas Bakery/Wedding Bells shop it measures around 23 feet in width, and when you reach near Mallikatte Neuro Centre it shrinks down to 11.5 feet in width-how could this happen? No proper planning. All of a sudden two lanes turn out to be one lane-this could result in severe accidents. And there are no warning signs of the road getting narrow-only a barricade is installed, which was knocked down by a motorist. Has the MCC officials noticed this? Also where the road narrows down, there is a huge open drain, and one of these days a speeding bus or other vehicles would surely land into this pit.

India’s education hub, Mangaluru has an abundance of charms but its roads and traffic are not among them. The roads are narrow and the network woefully scanty, despite the fast-paced growth and exploding vehicle population in this city. Traffic is chaotic, footpaths are non-existent or broken, drains overflow and many streets have an overhanging mass of tangled phone and power lines. The roads are so wretched that helpless residents can only make light of the misery by creating pothole-counting face-offs and crater-measuring contests.

How did this St Agnes-Mallikatte road come to this pass? Through a deadly combination of a lack of expertise, bad planning, as well as rampant corruption. MCC should lay some standards that will set the paradigm for future road works. MCC authorities should inspect and supervise when the road work is going on. If not, it will be business as usual. Roads will continue to be laid and relaid while money will leak out and line the pockets of corrupt officials.