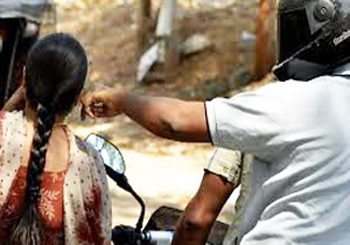 Mangaluru: This has been happening over and over. Yet precautions are not being taken.

After a break of some months since last year, there has been a disturbing kind of rise in the number of chain-snatching incidents in the city and around. Until date, five incidents had already taken place in the city during this month.

Two more cases were reported on Wednesday, Apr 22. Lakshmi, after attending a wedding in Valencia, had boarded a bus and got down at Naguri. As she walked by the road leading from Alape Padil towards the railway station on her way home around 2-30 pm, a young man arrived from the Karkera house direction. He stopped over and asked her for the house of Muttappa Poojary.

Just when she was trying to reply, he bent over and snatched two chains weighing four sovereign valued at Rs 77,000 from her neck. He immediately sped away. As it was a secluded spot, nobody was around to come to her aid. A case has been registered at the rural police station in Maroli.

In the second instance, which happened at a spot with more human movement, Shyamala who was returning home after buying milk lost a valuable chain. She was walking by the side of the first cross at Karangalpady on Wednesday around 3-20 pm, a man arrived in a bike and snatched her gold chain of 4.5 sovereign worth Rs 90,000. He too fled immediately. A case has been registered at the Kadri police station.

When will this end?

There have been repeated media reports and cautions issued. Yet no precautions are being taken. Even taking for granted that all women may not follow web and print media, it is expected that at least the other members of the family keep them informed and warned.

It is not enough if the law-enforcing agencies are blamed. A point raised by a Karangalpady resident appears valid. ‘Does someone have to wear a 4.5 sovereign gold chain while going to buy milk?’ – he asked. The craze for the yellow metal and to show it off seemed to be the main issue here, he added.

(File pic for graphic effect only)

The same story, over and over!