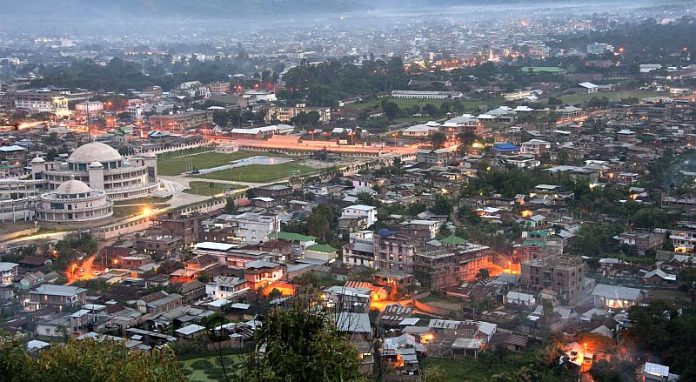 Manipur – The Land of Jewel and Celebrations

Manipur is a beautiful state among the seven sisters and one brother of Northeast India surrounded by the seven hills, as it is located between the hills the state is divided into two parts, one is the hilly region called “Ching” and the other the valley part called “Tampak”. Even though they are divided into parts, they live in a single umbrella, the motherland Manipur which they called it “Sanaleibak”(the land of the jewel) and this united group is called the “Chingtam”.

The state is known for its tourist places and also for its uniqueness like the flower “Shirui Lily” (Liliummackliniae) which is a rare Indian species of plant found only in the Siroi Hill ranges in the Ukhrul district of Manipur and is the state flower of Manipur;The “Sangai” (Rucervuseldiieldii) is the brow-antlered deer which is an endangered species of animal found in the Keibul Lamjao national park, the floating grass in the Loktak lake, the fresh water biggest lake in Manipur which has its own unique by growing the floating grass called as “Fumdi” and the Sangai is the state animal of Manipur and the state bird “Nongin” (Syrmaticushumiehumie) is also a rare bird found only in Manipur but now it has been extinct.

Not only the unique features of Manipur make the state beautiful but also the culture and tradition makes it more beautiful and even though it is a small state it has 16 districts in which 4 districts have not yet assigned but various community and religion live together which include the Meitei, Hindu, Christian and Muslim, in which the Christian has more than 30 tribes, but all live together celebrating the festivals together almost throughout the year. The culture of Manipur has its different history and are different from other parts of the country and the God they worship are also different- they mainly worship the local household deities and had a belief that the seven hills have seven gods each protecting the hills and the state. The festival of Gods called “Laiharaoba” is one of the important festivals in which the festival of household deities and jungle deities are celebrated.

The rituals of Manipur is also quite different that is of the marriage ceremony, death ceremony, naming ceremony etc. one of the most interesting things is that on the day of the Shradha ceremony the food items liked by the dead person should be given as a gift to the people who to attend the ceremony. As it’s a festival prompt state, a list of festivals are celebrated from the beginning till the end of the year and it goes through the Manipuri calendar which starts from the month of April in English calendar and end in March. The month of Sajibu(April), the state celebrates the “Cheiraoba” the new year of Manipur with the grant feast with various food items and exchange the foods with the neighbour and after the food, the people will go for trekking in the nearby hills.

Then the festival of the Muslim community starts-it is the Id-Ul-Fitr and Id-Ul-Juwha with their fasting month called the Ramadan, they celebrate the festival in a way that first they have a breakfast in the morning with the guest and the invitees, in the evening the children will go to the localities to collect donation as a part of fun and after that the married women will go to their maternal houses for the dinner and they have to spend the night there. In the hilly region, the festival flourishes in a natural beauty with the festivals of fruits namely the orange festival in which they have a contest named “Miss Orange Queen”, the other is the “Pineapple Festival” and many other food festivals.

And finally in the month of Hiyangei (October-November) the most famous festival which are waited by the female or the married women of Manipur., comes a day or two before Diwali, a valuable day for women as it is mainly for them which is called “Ningol Chakkouba”(women feast) where the married women were invited to the grand feast to their maternal house and were they will be offered gifts by their father and brothers, and in return the women have to shower the blessings for good health and wealth on their family members. Then comes the festival of light- “Diwali”, with its bright lights decorating the houses and every place with the diyas, candles, bulbs and the firecrackers fill the air.

Then the famous Sangai festival starts from 21st to 30th November every year, it is a fair where people from different parts of the world come to the show and sell their goods and have cultural programs-like People from Thailand, Africa, Bangladesh, Egypt, and this festival was named after the state animal Sangai to show the beauty and unique nature of it and also the state. In the month of December, the Christmas is celebrated in both the hills and valley tribal and Christian people will go to their native places and celebrate it there and it’s a lovely sight in the hill with the Christmas star hanging in each house and the Christmas carols filling the air.

In the month of January, “Emoinu” is celebrated for goddess Emoinu, who gives the wealth and food for the people of Manipur and like in Diwali as they light candles in every house, during this feast they offer fishes, vegetables and the rice to the goddess after which it will be cooked and again the cooked feast is offered to the goddess Emoinu and this is mainly for the Meitei people. Right after this festival the Kabui tribe will celebrate the “Ga-Ngai” festival where the youth and old gather together and celebrate it, they celebrate it with the cultural activities that are their traditional dances wearing the traditional attires and after that the boys and girls will sit in a place called “Pakhang Phan” for boys; and “Leisa Phan” for girls- and will sing waving their scarf and shawl.

Then the last month “Lamta”(March) – its Holi celebration, the festival of colors, in this festival some unique dance performance can be seen that is the “Thabal Chongba” in which during the five days of the Holi every locality will do this dance form at night in a playground where both boys and girls hold hand together and dance till midnight which will be guarded by the volunteers, that is the local boys of that particular locality and the “Meira Paibi”, they are the women folk who hold fire torch. In this way, all the festivals are celebrated with love and peace.

About the Author:…….. is a Degree student at Alva’s College-Moodabidri.