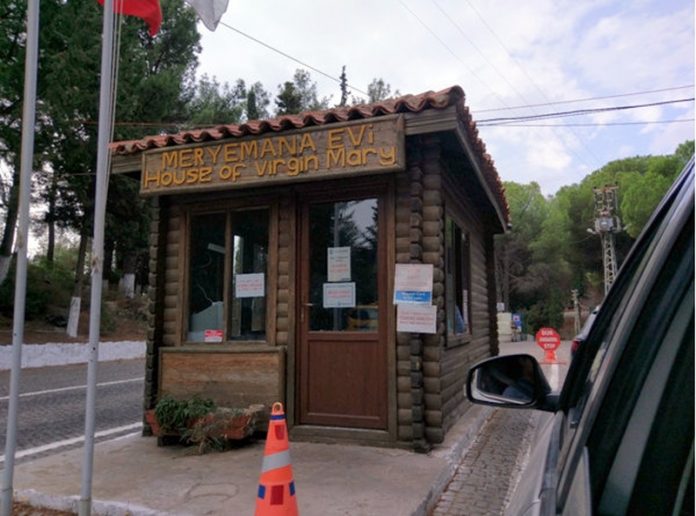 When my wife Verina, told me about Mother Mary’s house in Turkey, I dismissed the theory vehemently, arguing that it would be next to impossible. But then suddenly some excerpts from the book “Jesus lived in India” sprang up from the back of my head and I started thinking that there could be a remote chance. I recalled certain passages from Holger Kersten’s infamous book that Mother Mary’s tomb was in Karachi, as she passed away, en route to India. Without giving it much thought, I concluded that the alcohol Mr Kersten consumed whilst writing his inebriated dreams, was of extremely high quality.

Anyways, about two years ago, when Verina and I planned a trip to Turkey, the idea of exploring Izmir, a province in Turkey, supposedly the place where Mother Mary spent her time, after her son’s crucifixion, came up. Without having any faith in this, I dismissed it again opting for a fancier place to spend a vacation.

Certain things in life are bound to happen, whether one likes it or not. Some intentionally, some miraculously, but most of them are for one’s own good. Recently, Verina had to travel on work to Turkey. I believe Mother Mary was truly calling us. Perhaps she wanted to see how we have taken care of her blessing to us- our son Ian. We decided to make it to a family trip. I still had my doubts about the house and thought this was a nice little gimmick from the Turks to attract devotees to a remote hill in the countryside of Turkey. However, I kept an open mind.

Our driver to Mother Mary’s house or what the locals lovingly call “Maryemana Evi” or “Virgin Marys House” was a young boy named Fruth or that is what I understood from the little English he spoke. Language is always a problem in Turkey as the locals mainly speak Turkish, making it tough for tourists. Nevertheless, the boy was a genius. He held the door open to the lady and after we were comfortable inside the car, he unlocked his smartphone and opened the app “GOOGLE TRANSLATOR”- TURKISH TO ENGLISH AND VICE VERSA. Wow! Fruth seemed to be fond of Ian and so he also hooked up the phone to the car speakers via Bluetooth and played Ian’s favourite rhymes. So much for hospitality.

I am a big believer in Mother Mary, mainly because of my mom, who used to take me and my sister to the Carmel chapel, near my home every Saturday evening. I have always found comfort in her foot and she too has saved me a million times from disasters.

We reached our destination and the gate is heavily guarded by the Turkish Police. The parking fee, I was told goes to the local municipality and the shrine is purely run on donations. As I said earlier, I was not a hundred percent sure about the authenticity of the claim that Mother Mary lived here. Ian, who never likes sitting at one place, wriggled out of Verina’s clutches and began talking to the guard. It was a sight to watch. The guard was all smiles. Two strangers, without a common language, were communicating flawlessly. Neither understood anything and yet they understood everything.

Ian just moved from the gate to the main complex as if he knew the place. It was surprising, as he always turns back and looks if either of his parents are around. But this time, he was walking straight to the house, as if his grandmother was waiting for him. The house is quite a distance from the main gate and it was amazing to see him walk in his customary style without any fear, just like how the house was discovered in the early 19th century

A nun named Anne Catherine Emmerich, who was handicapped had a vision in which Mother Mary told her about the house in Ephesus, which is a part of the province of Izmir in Turkey. She narrated it to a priest and the priest decided to investigate and after repeated explorations, the house was discovered, and it matched exactly to what Emmerich had told. It took a while for the faithful to catch on the belief, but today the house is widely popular. The church has carefully regarded this as the last known address of Virgin Mary, as Catholics consider her to be assumed into heaven and Muslims consider her to have died and buried in Israel.

Verina rushed after Ian, who was happily running towards the house. I paused to read the marbles about the history of the shrine and how it was discovered- the part I mentioned above. Walking past the souvenir shops, I walked past a baptism pool and a seating area for religious services. Three popes have visited and celebrated mass here- Paul VI, John Paul II and Benedict XVI, portraying Holy See’s stand on the authenticity of this place.

As you walk past the seating area, a tiny humble house comes into view. The body of the house is as it was discovered, and the roof is completely rebuilt to match with the original one as much as possible. The size of the house is so tiny that I wondered if it was really the Mother Marys abode. I entered the house going through a metal detector. There is a small area where one can pick up candles. One is supposed to be silent and our little fellow was rejoicing with Mother Mary and that too: on top of his newly discovered voice. I grabbed him like a chicken and took him outside- just like how all embarrassed parents do in public. Verina had always believed in the story of Mother Mary’s house and I had several times told her that, if she believed Mother Mary’s house was in Turkey, then she might have to also believe in Mr Kerstens theory, as Turkey falls en route from Israel to India, which I did not believe even a bit. There had to be a plausible explanation of why Mary came to Turkey.

As Verina came out, I went in again- this time alone. There is a huge statue of Mary inside the house. I knelt before her and prayed. As I came out of the house through the adjacent room, I touched the wall and its bricks or rocks. A sudden intense holy feeling swept all over me. I have never felt anything like this before in my life and I now firmly believe that Mother Mary indeed lived here and was taken to heaven in body from the same place. Such strong was the feeling.

Apart from the intense holy feeling, I also read from the scriptures that, Jesus entrusted John to take care of Mary upon his death. After Jesus’s death, John was dispatched to spread the word in Turkey and eventually was to become the bishop of Turkey and died in Ephesus- the very province, where this Maryemana Evi is. John and Mary must have lived in Turkey and in this house. There is a strong possibility that Mother Mary travelled to Ephesus with John and stayed in this house. Moreover, villagers close by celebrate assumption of Mother Mary to heaven. This tradition has come from the early days and they have passed it on generation to generation. Here was a logical reason for Mother Marys Turkish house, much stronger than the myth about Jesus travelled to India.

We lit candles, clicked a few photos, spent some time in the well-kept grounds and gardens around the house. There is a souvenir shop a few steps down from the house and it is ridiculously expensive but cheaper than the shop outside. There are metal taps lined up and visitors can drink from it and make a wish. There is a wishing wall, just like the tree we saw miles away, on our ascent to the house. People tie handkerchiefs, papers, ribbons and make a wish. There were millions of such papers tied on this wall. We did not tie anything and just thanked her for the abundant blessings she has given us. Ian was amazed at this wall and wanted to pull a few wishes out.

We ended our day with a wonderful trip to a scenic village called Sirinci and then a whirlwind walk on the Kusadasi beach. Fruth doubled his role to a tour guide as well and accompanied us in the village, acting as our main negotiator. He indeed got us some good deals on fruit wine and some accessories.

All in all, our pilgrimage to Maryemana was fruitful. We would recommend this place to everyone and experience the serenity, quietness and the intense holiness in and around Mother Mary’s house.

Loved this?? I believe through Mary Peace will come, she is such a Good Mother????

Thank you for the beautiful tour and sharing your wonderful experience.

I enjoyed reading this. I hope to visit Mary’s house one day!