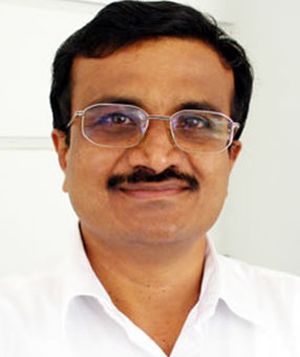 Pradeep Kumar Kalkura is the founder of “Kalkura Arts”, one of the leading and well-known advertisement agencies in undivided Dakshina Kannada District. The name “Kalkura” is synonymous with Udayavani, The Hindu and many other leading newspapers when it comes to advertisements. Kalkura is known for excellent and dedicated customer service and their creative arts in advertisement keep their customers glued to Kalkura for their advertisement needs.

First time in Mangalore Mr Kalkura started hoardings advertisements, bus shelter hoarding concept, and outdoor publicity. When he saw the Bus shelter concept in Hyderabad, he immediately introduced the same in Mangalore. Now no other agencies do such business in Mangalore like Kalkura Advertisement does!

When Pope John Paul II visited Mangalore in 1986, he was the member of Advertisement Committee in Mangalore. They built big bamboo towers for publicity. During this time he started to help the downtrodden. Kadri Navaneeta Shetty and Mr. Kalkura started Krishna Vesha competitions at Kadri Temple. Watching all this and it unique success, one day, Kadri Ramadas Devadiga, Managing Trustee of Kadri Manjunatha Temple called and informed Mr Kalkura that he wanted to appoint him as one of the Trustee of Kadri Temple. After this his life totally changed.

Since then Mr. Kalkura got himself involved and took active leadership role in various programs. He also got fascinated to the world of literature. He participated in Akhila Kannada Sahithya Sammelan, Gayatri Mahayaga at Kavu Panchalingeshwar Temple at Bajal, Mangalore. He also conducted Pejavara seers 60th Pitharohana Programme at Neharu Maidan. The capability of organizing such mega programs was recognized by Mr. Hari Krishna Punaroor and he encouraged him into Sahithya field.Kalkura Foundation

Kalkura Foundation organizes Krishna Vesha competitions every year in the NGO Hall premises and it attracts more than 5,000 people. With this popular program, they have gained an international fame. They also felicitate achievers in various fields and honor them with Kalkura Prashasti awards. Kalkura Prakashan has published Kannada and Tulu Yakshagana books written by literary group. He is also the Proprietor of Kalkura Group of Concerns Sri Krishna Complex Kodialbail, Mangalore.

Mr Kalkura, 45 years, is the first son of Manjunatha Kalkura and Lalitha Kalkura. He enjoys sibship of a sister and two brothers.

He did his schooling at Kadiyali School and Kamalabhai High school in Udupi, and then he attended Karnataka Polytechnic at Mangalore and Mahaveera College at Moodabidri. He holds a diploma in Automobile Engineering.

What makes Kalkura so Unique? To get an answer for this one must meet Pradeep Kalkura, the Managing Director of Kalkura Arts, personally, says Lawrence Mascarenhas, who was one of his clients years back and now settled down in the United States of America. “Pradeep Kalkura speaks very little but whatever he speaks can be written in stone,” says Mr. Mascarenhas. Once he promises, he will see that his promise is kept up at any cost. Pradeep Kalkura is a man of honor, commitments, integrity and sincerity; who commands respect not only from his staff, but also from his clients.

Having Diploma in Automobile Engineering, what inspired you in the field of Advertising?

When I was in High School, I saw personalities like Dr TMA Pai, Dr. Shivarama Karantha, Girish Karnad and others. I was involved and participated in Mr. Girish Karnad’s dramas/plays after completion of high school. I came to Mangalore and joined Karanataka Polytechnic (Industrial Technology of Institute) and there I got selected as a Student President of Karnataka. Since then I started fighting against raging and drugs and I started my challenging days. I also started fighting against many of our student’s problems.

In fact, I was thinking of becoming a doctor. Because of some unavoidable circumstances, I obtained my Diploma in Automobile Engineering. After my education I participated in few seminars in entrepreneurship, which was organized by the Syndicate Bank. After attending these seminars, I was attracted by the advertisement field. In 1983, I was paid Rs.500 by Uayavani for advertisement. In the mean time I took a table space at Sahithya Kendra at P.M Rao Road and started my Kalkura advertising business.

What are your future plans or ambitions?

First, I like all India level Sahithya Sammelana, I have organized all India level Yakshagana Sammelana. Yagshagana is the traditional art of our culture, so we need to continue this unique tradition for our new generation. Hence, I am planning to do this in the near future.

Secondly, I am now appealing to the Government to open a Yakshgana Academy because we have to save the richness of traditional yakshagana.

Mangalorean.com wishes Mr Kalkura all the very best in his future endeavors!

Namasthe congratulations. It is nice to see your achievements . I feel proud that I was a member of vilasini compound 29 years back .

Kuradi Chandasekhara Kalkura, Kurnool. A.P., India:
Dear chi. Pradeep, Vandemaatram.
It was indeed very nice of you to have borahed the topic of organising sammelan of the kalkuras. I stand by my promise of hosting one at Srisailam. All arrangements for food and accommodation will be made. I will strive hard for its success. It must start. You can indent on the cooperation from U.Keshava kalkura, Retd. Official, Karnataka Bank Ltd, Indrali, udupi and Dr.K.Krishna Kalkura, Alevoor most vocal among the Kuradi Kalkura heritage.

K.C.Kalkura, India:
Dear Pradeep, Vandemataram
I am glad that a member of our breed has risen to a great height. “I have immeasurable faith in the destiny and fate” said a cynic. “More and more I work, I get more of it”. You are an example. Drop in your mail id. It will be easier for me to communicate with you. I have lost my old cell; along with all the numbers saved in it. . Hence I do not have your cell no also. However my cell number remains;
My contact particulars;
K.C.Kalkura, Advocate,
President, Gadicharlal Foundation,
65/64, Old Post Office Rd. Kurnool. 518001.
P.Nos. 08518-245018/ 240171
Mob. +91-9440292979
Mail id; ckalkura@yahoo.com

abhinandan, India:
Thanks to mangalorean.com for providing us such a wonderful coloumn. Does Mr.Pradeep kalkura have his personal website so that all the people in the world will come to know about his work.

Mamatha Deva, President, Inner wheel Club, Sullia, India:
Mr. Pradeep Kumar Kalkura is a dynamic leader who is proving himself worthy of the responsible post of District President of Kannada Sahitya Parishat. I had the opportunity to invite him as a guest of honour for one of our literary programmes “Gamaka Vaachana -Pravachana” at Sullia. He appreciated the program and his speech was excellent. He encourages Yakshagana art, kannada literature and culture. I had another occasion to meet him at the Taluk level Kannada Literature Conference which was organised by us. His guidance and encouragement has proved the conference a grand success. I wish him a successful, inspiring and rewarding tenure in Sahitya Parishat.

SRIDEVI AMBEKAL,MCJ, India:
Mr. Pradeep Kumar Kalkura is the active leader. He is fascinated about Kannada literature. He did wonderful programmes for developing Kannada language and kannada literature. He is eagar to protect our culture, yakshagana and he had planned for it. So all the best sir……

mangalorean.com has found some of the great personalities here…this column gave more energy for mangalorean stars to do much more good work for the society.