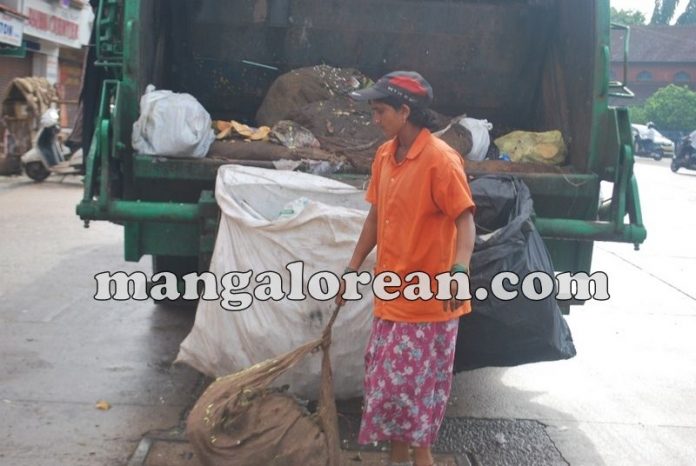 Pourakarmikas Resume Waste Pick Up Today until they Plan another Protest?

Mangaluru: The protest by Pourakarmikas, drivers and other workers belonging to Antony Waste Handling Cell Pvt Ltd {AWHCPL} reaching the third day, tonnes of garbage has already being piled up across Mangaluru since Thursday morning, 14 June 2018. The employees of AWHPCL have boycotted work demanding an increase in wages and other issues with their employer. Around 750 workers, including truck and tempo drivers of the waste handling company, stopped lifting garbage from Thursday itself pressing for their demands. But with negotiations with MCC Mayor, the workers have resumed cleaning work this morning. {Saturday}

They alleged that the contractor has not revised their salary since the beginning of the contract and demanded they be paid as per the revised minimum wages. They also alleged that there were discrepancies in remittance of provident fund and ESI subscriptions deducted from their salaries to respective statutory authorities.

Consequently, garbage could be seen at corners of every street even as garbage spilled out from bins in apartment complexes. Stench, routinely felt in Central Market and other busy places in the heart of the city, only got enhanced by afternoon. As per Company’s legal adviser Vivekananda Paniyal that the workers were right in demanding payment of minimum wages; but the onus lies on the Mangaluru City Corporation (MCC). Though the contract was tonnage-based (₹3,201 per tonne for north package and (₹2,051 per tonne for south package), the MCC is liable to pay any enhancement in the cost owing to statutory requirements. “Increase in minimum wages is a statutory liability and MCC should have enhanced the payment,” he had said.

MCC Commissioner Mohammed Nazeer however refuted this demand and said the Department of Municipal Administration has opined that the corporation was not liable to pay for enhanced wages as the contract was for payment per tonnage. The corporation is paying the annual escalation charges too, he added. But with the interference of Mayor K. Bhaskar and convincing the AWHCPL to start their work, the services of garbage clearance has started this morning {Saturday}.

It has been a hectic morning for all these AWHPCL employees, collecting the garbage pile up since three days. As per a employee of AWHCPL, even though they got their last month’s salary on Friday, but there are few other demands of theirs which need to address – so a meeting has been scheduled with their company top official-Tarjindar Singh, Chief Operating Officer, {who has come down from Mumbai} this afternoon at 3 pm, to further discuss on their demands. And if the talks fail, chances are that workers may strike again? So keep your fingers crossed until then.