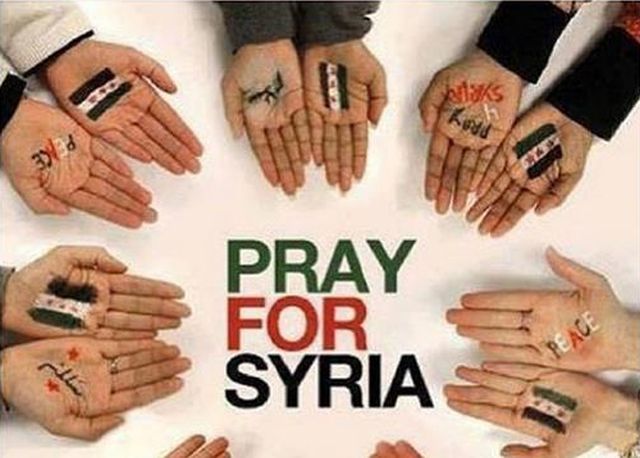 Pray for Peace-With and For Children of Syria

Lebanon: June 1st is observed as International Children’s Day by several countries(not all) across the globe. This day has also traditionally focused on the need and importance of ‘child protection’. Pope Francis has consistently brought the terrible realities of the refugees to the conscience of the world; highlighting particularly the plight of millions of Syrian children who have been killed, orphaned or displaced as a result of this current civil war.

Last Sunday, May 29th he did so once again during his Angelus Message saying, “Next Wednesday, June 1, on the occasion of International Children’s Day, the Christian communities of Syria, both Catholic, and Orthodox, live together a special prayer for peace, which will have as its protagonist’s children. The Syrian children invite children from around the world to join their prayer for peace.” It is therefore recommended, that if possible, we join in this Global initiative; we can do so in several different ways, among them:

– gather the children(and others) in our institutions/centres to pray for PEACE in Syria and everywhere (this prayer could be moments of silence; maybe texts from different Sacred Scriptures could be read; songs of peace could be sung in the local languages)

– the children could be asked to write poems/essays; do a painting/drawing ;give a talk on PEACE!

It would be good however if all are made to realize that WE REALLY DO NEED PEACE IMMEDIATELY – and we believe ,that praying together , with and for the children of Syria- is one way of realizing this. The article below from the CRUX could serve as a backgrounder

Pope Francis is greeted and photographed by deacons at the end of a Mass for the Jubilee, Holy Year, of Deacons, in St. Peter’s Square at the Vatican, Sunday, May 29, 2016.

Rome: Thousands of Syrian Christian children, led by their bishops and patriarchs, are coming together to pray for peace, and Pope Francis is asking other children from around the world to join them. “On Wednesday, June 1, marking the International Day for Protection of Children, the Christian community of Syria, be it Catholic and Orthodox will live together a special prayer for peace, which will have the children as the protagonists,” Pope Francis on Sunday.

“Syrian children invite the children of the world to join their prayer for peace,” he added during the Angelus prayer in St. Peter’s Square, surrounded by thousands of deacons who were in Rome to celebrate a jubilee event as part of the Holy Year of Mercy. On Wednesday, thousands of children will take to the streets of the cities of Damascus, Aleppo, Homs, Tartus and Marmita, to attempt to overcome the fear and uncertainty which are products of years of bloody civil war in Syria.

According to the UK-based Syrian Observatory for Human Rights, since the beginning of the conflict in Syria five years ago, an estimated 14,000 children have been killed. Each day, seven lives are cut short as a direct fallout of the fighting. These numbers don’t take into account those who died of starvation, for lack of access to medicine or trying to reach Europe. Local bishops and patriarchs of the various Eastern Catholic denominations, the Syriac and Greek Orthodox Churches, the Armenian Apostolic and several Protestant churches, with the support of Catholic Charity Aid to the Church in Need, are setting their differences aside to guide the youngest in their flocks.

“Kids in our nation, Syria, are the little brothers and sisters of Baby Jesus in need,” they write in a common message released this week. “They’ve been suffering wounds, trauma and death as a result of a cruel war. Many have lost their parents and everything they held dear. Many more were born during the war and still don’t know what it is to live in peace.” “Their tears and suffering cry out to heaven,” they say. “The defenseless child in whom God chose to become man is, simultaneously the Lord of History.”

Father Andrezj Halemba, coordinator of the Middle East section of Aid to the Church in Need, told Crux that this day of prayer is one of many ecumenical ideas they’ve planned for the near future in an attempt to foster peace.

Speaking via phone from Germany on Friday, Halemba had said they hoped Francis would ask the world to join during his weekly Sunday remarks, so this initiative could become an international appeal as well, serving as a “global reminder of the suffering the Syrian population has gone through.”

“Children are the most pitiful victims of this war, but they’re also the ones who are closer to God, their appeal will be heard by God, and hopefully, it’ll move the hearts of those waging this war,” he said. Halemba also said that this isn’t only the first of what he hopes will be a series of actions from different rites, but it’s also the first one ever. “We have so much to do to rebuild the country, and it’d be much better if we did it together,” he said, adding that so far, the experience Aid to the Church in Need working with the various Christian denominations has been “very good.”

The Catholic charity is present in every continent, and also national offices in 22 countries, included the United States and Italy. According to Halemba, they’ve all committed to inviting children to join the prayer. It’s worth remembering that in 2013, on what seemed to be the eve of a US-led coalition intervention in Syria, Francis led a prayer vigil in Rome’s St. Peter Square. He was later credited by Russian President Vladimir Putin of preventing an international escalation of the war. Last Wednesday, at the end of the public audience, Francis had asked the thousands gathered in the square to pray for the “beloved Syria,” only two days after a series of attacks perpetrated by Islamic terrorist organization ISIS, that killed 150 “defenseless civilians.”

On that occasion, the Pope asked that everyone pray for the “eternal repose of the victims, solace for the relatives” and that God would “convert the hearts of those who sow death and destruction.” The appeal written by the bishops and patriarchs for Wednesday’s initiative closes with a prayer: “To Him, Christ, King of the Universe, that as a vulnerable child in the arms of his Mother holds the world in his hand, we pray that he blesses the Syrian children.” “Protect and save the children of this country! Hear our prayers now!” they said. “Don’t vacillate anymore in gifting peace to our country! Look at the tears of the children, dry the tears of their mothers, allow for the cries of pain finally come to an end.”