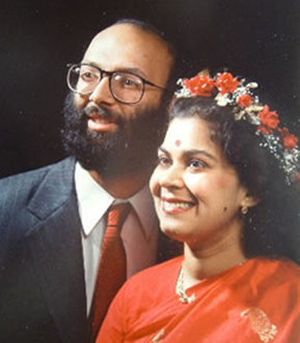 Mr Roy Mathias, Professor of Mathematics, was born on Valentines Day, February 14, 1963 in Calcutta. His proud parents are Joseph and Pamela Mathias, Mangaloreans, who moved on work to Calcutta and to Madras. At the age of Seven (7), his parents migrated to New Zealand in 1970. Mr Mathias grew up in Auckland, New Zealand. He has two brothers, David in Australia and Jeph in New Zealand. Mr. Mathias is the oldest among three musketeers!

• 1989 – Elezier Naddor Postdoctoral Fellowship to Cornell and to Stanford (awarded by The John Hopkins University).

• 1991 – Second Prize in the Leslie Fox Competition (Oxford University, for a paper in Numerical Analysis by an author under 30).

• July, 2003 – Prize for the most outstanding paper in Applied Linear Algebra published between January 2000 and December 2002.

Mr. Mathias tied the knot with Anita Mathias from Mangalore, on November 18, 1989. Anita is an excellent writer. She holds an M.A. in English/Creative Writing, The Ohio State University and an M.A. in English, Somerville College, Oxford University. She has won a National Endowment for the Arts Fellowship and numerous other Literary Grants and Awards. She has also published widely. Together they have two kids, Zoe – 8, attends Elementary school and Irene – 4, in pre-school.