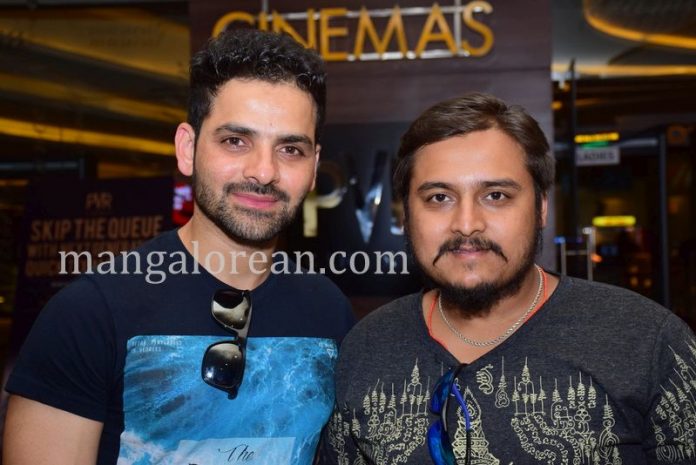 Mangaluru: It has been only two weeks since the release of Kannada film “Raju Kannada Medium”, but the buzz surrounding the film continues. The movie now showing at PVR cinemas at Fiza Forum Mall has been running to packed houses for the last two weeks, and today, 31 January, the 3.30 pm show had 75% crowd- and the actor Gurunandan is overwhelmed by the response from the Kannada film lovers, and through Mangalorean.com extended his heartfelt thanks to all his fans and the Kannada movie buffs for supporting the movie. While the film, produced by Suresh Arts, stars Gurunandan in the lead role, a sizeable number of the audience has been checking out the film for the presence of Kannada star Sudeep, who appears in a cameo.

Director Naresh Kumar’s latest directorial outing “Raju Kannada Medium” aspires to be a slice-of-life movie. It has set a goal for itself, which is to convincingly explain the audience the true value of a human’s life. Naresh, who is also the writer of this film, opens the movie with Raju(Gurunandan) staring at the end of his life. He is all set to jump into a waterbody. From there the film goes into flashback mode to trace events in Raju’s life that prompted him to choose death over life. The main movie cast includes Sudeep, Gurunandan hailing from Chikkamagaluru, Amith in comedy role, and Avantika Shetty from Mumbai. Directed by Naresh Kumar, the movie has got the 2.5 stars rating.

A bevy of media persons had an interaction with “Raju Kannada Medium” actor Gurunandan and Comedian in the movie Amith, prior to the 3.30 pm show at PVR cinemas-Forum Mall on 31 January. In a face-to-face talk with Gurunandan and Team Mangalorean, he narrates about the story of the film- which goes like this -“A young Raju (acted by Gurunandan)) gets a metal container that holds a scroll from his mellow father. Raju’s dad tells him to keep it with him safely and not to open until his 16th birthday. When Raju meets the age limit set by his father, he opens scroll only to find a fill in the blank question: Which is the most important thing for you in life? As he grows older his priorities, goals and preferences also change. A girl he met in the school was the only thing he ever wanted in his life. But, when she moves away, tending to the needs of his family members becomes important for him. And then being with his friends and finding a paying job so on and so forth.”

“His quest to find the permanent answer to his father’s question takes him to Bengaluru, where his ambitions and the view of life grows bigger and wider. Now it turns into a bit of small-town boy’s journey in the big city. The hurdles he faces mainly due to his poor English speaking skills were not easy to get him a job at a call centre. But very soon he gets the support of a rich entrepreneur Kiccha Sudeep (acted by Deepak Chakravarthy), who tries to help him out to achieve his dream by getting a job at a call centre in Bengaluru. In the meantime, Raju takes a trip overseas, but the plane crashes near an Island in Thailand. What’s a better way to learn the importance of life and relationships than one being stranded on a deserted island?

Speaking on the second half of the plane crash sequence, Gurunandan said, “In the second half, the story transpires on an island. From a plane crash to a shark attack and more, pretty much everything had to be created in a design studio. The director had a storyboard ready for each and every sequence and gave the designers images to explain what he wanted. They did the same with me as well, especially for the underwater sequence, which has a shark attack. I was told about the reactions expected from me and once they had shot that, they took that footage to the graphic designers to work on the shark. Seems like it wasn’t easy and they took at least six months to reach perfection. There was a lot of to and fro, but they got exactly what they wanted,”

“Audience reaction to the sequence on the island, has been good, with many voicing surprise that it has all been created digitally. People know that we could not have shot with an actual shark, but many assumed that there was real footage mixed with our sequence. That’s the quality that we have brought onscreen and it gives us great pride that people have compared it to Hollywood standards,” added Gurunandan.

Also speaking to media persons, Amith who dons the comedy part said, “Naresh has also added separate comedy tracks just out of compulsion. In the meantime, the film also has many pluses and one of them is cinematography by Shekar Chandra. He has beautifully explored scenic hill stations that makes the picture viewing a soothing experience for the audience. And composer Kiran Ravindranath’s melodies compliments Shekar’s work, especially in the portions shot at hill stations and the island. The star cast is also a big plus. KicchaSudeep as Deepak Chakravarthy, the richest businessman in India convincingly fulfills the only purpose why the director brought him on the team. He gives the much-needed star attraction to the film, which mainly has up-and-coming actors. Gurunandan and Avantika Shetty try their best to bring freshness into the story. The movie also has some smartly written dialogues. One can’t help but giggle at Chikkanna’s short monologue where he explains a few salient features of life in Bengaluru city.

In conclusion, the makers had a great story as Raju is representative of almost every average youngster who chooses to follow the herd and doesn’t try to find his own understanding of the purpose of life. From infatuation to family to friendship to money he finds different meanings to life through each phase of his life – only for him to be let down by each of those at those times. The first half of the film is rather entertaining and seems like an extension of First Rank Raju. The second half has some good bits. The film has some good cinematography. To know more about the movie go watch it at PVR Cinemas!