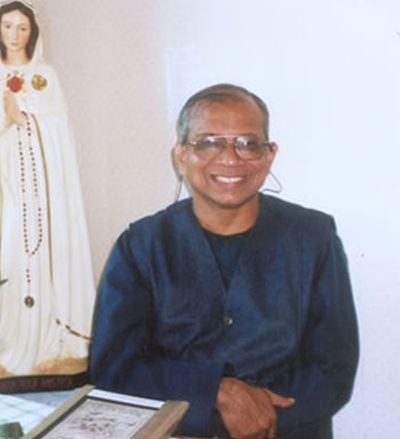 Fr. Cedric Prakash, a Jesuit Priest, has committed himself to the service of faith and promotion of human rights, communal harmony, justice and peace, since the last 30 years.

Fr. Cedric Prakash Lobo was born in Bombay in November 1951 as the youngest of four children. His father Late Conrad Lobo, worked as an Engineer in a sister-concern of Siemens and his mother Cynthia, a Teacher at St. Joseph’s Convent, Umerkhadi.

Fr. Prakash is a direct descendant of the well-known Mascarenhas family of Kankanady. His great-grandfather, Dr. Simon Mascarenhas was a renowned Doctor at Fr. Muller’s Hospital and Dr. Simon’s brother Msgr. Raymond Mascarenhas was the founder of the Bethany Sisters.

Fr. Prakash’s maternal aunts are: Sr. Bernadette – Apostolic Carmel Nun who served for several years in North India and died in a tragic Jeep accident in Nagaland few years ago; Sr. Olinda Pereira – belongs to the Daughters of the Heart of Mary. Sr. Olinda is the founder and the first Principal of Roshini Nilaya, the College of Social Service in Mangalore. She now heads a Center called “Vishwas” which responds to the needs of the elderly in Mangalore. She is well-known in India and abroad for championing the cause of women and the founder-member of the National Council of Catholic Women of India. She was also a member of the National Commission for Women. Fr. Prakash’s uncle, Mr. Austin Tauro (IAS retired), had a distinguished administrative career and has served as Chairman and Managing Director of the Indian Oil Corporation.

Fr. Prakash completed his B.A. (Hons.) from St. Xavier’s College, Bombay in 1972 and later worked fulltime with All India Catholic University Federation (AICUF) in Madras. The following year he was invited to Taize, France, where he was a part of 14-member Intercontinental team that helped to prepare “The World Council of Youth”.

In July 1974 he joined the Society of Jesus in Gujarat. He completed his Philosophy studies in Shambaganur and Madras, and Theology studies mainly in Ahmedabad with short stints in Delhi and Pune. He was ordained as a priest in Bombay in 1985. For two years after ordination, he worked in the missions of South Gujarat in the tribal area of Umarpada. In April 1987, he was appointed as the Director of St. Xavier’s Social Service Society, an organization involved in the slums of Ahmedabad, and in the rural areas of Gujarat State – through four inter-related approaches of education, health, organization and environment. He held this post till May 2001.

In June 2001, he began ‘PRASHANT’ (A Centre for Human Rights, Justice and Peace), which is also the Province Office for Integral Social Development of the Gujarat Jesuits. Fr. Prakash is also Secretary of Social Communications – C.B.C.I. (Western Region), National Vice-President – Peoples’ Union for Human Rights (PUHR), Coordinator of the Province Office for Integral Social Development (POISD) – an organization dedicated to coordinate developmental, justice and peace works of the Society of Jesus in Gujarat, India.

Fr. Prakash is currently the Rector of ‘Premal Jyoti’ the major house of the Gujarat Jesuits.

In the wake of the communal carnage which engulfed Gujarat from February-end 2002, Fr. Prakash has been involved in works related to communal harmony, justice and peace.

He is part of a seventeen-member committee called ‘Citizens for Justice and Peace’ which constituted the Concerned Citizens’ Tribunal whose findings have been put together in a voluminous report entitled “Crime Against Humanity”.

He was also invited to testify in Washington before the US Commission for International Religious Freedom in June 2002; besides, he was also invited in May 2002 to Luxembourg and in October 2002 to London for interactions with the European Union and the Foreign and Commonwealth Office of the British Government respectively. These past months, he has been invited to speak at several programmes and seminars all over the country besides being interviewed regularly by the print and electronic media on the Gujarat situation.

His major accomplishments include:

• Fr. Parmananda Divarkar Award for Communication for Peace in January 2004

Fr. Prakash has travelled extensively abroad and continues to do so in Europe, America, Africa and Asia, mainly on lecture tours and to attend various conferences including United Nations Conferences and other meetings and remains at the helm of activities concerning human rights, justice and peace.

His eldest brother Roland is a retired Engineer from Cromptons, Nasik, now teaches Management in different colleges in Nasik, he is married to Mariette. Second sister,
Bernadette is a Doctor in Sociology and is settled in Bangalore. She retired from ACTION-AID in March 2004, her husband Rex D’Souza, who taught for 33 years in St. Joseph’s College, Bangalore died four years ago. Third sister Germaine is working as an Executive Secretary to the Chairman and Managing Directors of Cromptons in Bombay. Germaine is married to Pranstine Saldanha and they live in Bombay.

Fr Cedric Prakash’s message to the readers of Mangalorean.com:

“As Mangaloreans, we must take legitimate pride in our rich cultural heritage and traditions; however, wherever we are, we need to break down the narrow confines of our own ethnicity and allow the richness which characterizes us permeate to every other level and group of society. The country and the world at large needs this leaven which should find its source in our bonding”

Robert Miranda, UK:
I heard about the recent incident at Mt Carmel’s church – Bandra, Mumbai. Fr Cedric should be supported by all christians – laity and church leaders alike to speak his mind and his experience about Gujarat. There are very few priests who speak boldly and engage as he does. God’s word says –
God has not given us a Spirit of timidity (or fear) – but of power, love and a sound mind.

But we must all keep in mind that we do not denounce any other faith nor do we break the election model code of conduct.

I am not comparing here please –
If a muslim leader can come out boldly and speak and support a political party based on his political beliefs, why are Christian leaders not able to do so or are being muzzled into silence !
And we all agree to disagree ! Perfect freedom of speech under the constitution.

Christians all across the country should unite and speak out!

eleni_aus, Australia:
It is heartening to read of such wonderful work. May God continue to bless your efforts and those of all people of good will.

Rule of law rolls easily off the tongue but is harder to achieve in reality.Corruption and self-interest can so often interfere, facilitated by ambition, fear, poverty – and as one fellow put it a deterioration in ethics/morality.