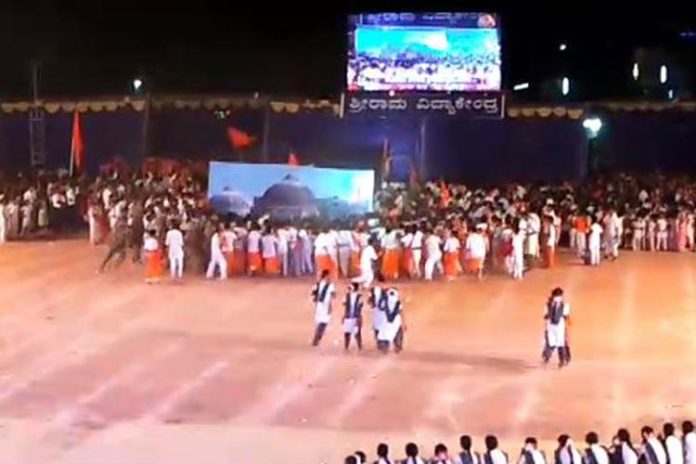 Mangaluru(The Free Press Journal): A school in Karnataka run by an RSS member had students reenacting the illegal demolition of the Babri Masjid in a play, while several guests including Union Minister of Chemicals and Fertilizers, DV Sadananda Gowda, Puducherry Governor Kiran Bedi and others sat and watched it.

The Chief Guests for the event were Union Minister of Chemicals and Fertilizers, DV Sadananda Gowda; Puducherry Governor Kiran Bedi; and several Ministers from Karnataka. pic.twitter.com/hVdqxvfdvI

A video of the students running towards a huge poster of Babri Masjid with the narrator cheering them can has been posted on Twitter. The poster of the mosque falls with the students dancing with joy and excitement and in its place, a poster of Ram Mandir is placed.

The video is from an event held at Karnataka’s Sri Rama Vidyakendra High School located in Dakshina Kannada district’s Kalladka, where students of grade 11th and 12th reenacted the Babri illegal Babri mosque demolition. Throughout the play, students can be heard hailing Ram, Hanuman and Sita.

Another formation d school children made was of the proposed Shri Ram Mandir at #Ayodhya. All such performances enabled d school ensure all of its 3800+ school children participate in d annual festival of Sri Rama Vidya Kendra, Kalladka Village, near Mangalore @PTI_News @ANI pic.twitter.com/IdaoySuBY4

In the video, the narrator can be heard saying, “They start demolishing the structure with anything they can get their hands on. With enthusiasm, Hanuman bhaktas with Hanuman’s anger, they bring down Babri structure. Bolo Shri Ramachandra ki, Jai!”

The school is owned by a powerful RSS leader in Karnataka, Kalladka Prabhakar Bhat, who is also the organisation’s south-central region executive committee member.

The event was attended by several Karnataka ministers including H Nagesh, Sashikala Joelle and our Union Minister of Chemicals and Fertilizers, DV Sadananda Gowda along with Puducherry Governor Kiran Bedi.

When asked about the play which goes against the Supreme Court’s notice regarding the Ram-Janmbhoomi dispute, the Prabhakar to The New Minute that he does not agree with the Supreme Court. He said that they have questioned the court’s statement that what happened with the Babri Masjid was wrong.

Phabhakar found nothing wrong in depicting the Babri demolition, he asked told The News Minute that it wasn’t a mosque but only a structure. He justified saying that the school also staged a play on Jallianwala Bagh.

The students also created larger-than-life formations in the shape of the flower Lotus, star, om and the Ram temple which are to be constructed in Ayodhya.