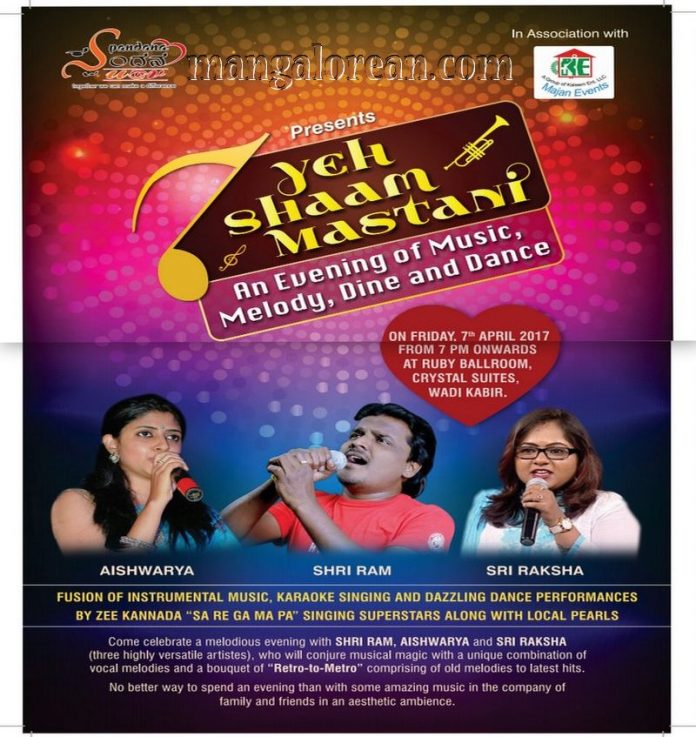 Sa Re Ga Ma Pa Artistes to Perform in Muscat

Oman: Spandana Muscat is all set to organise yet another mega musical event “Yeh Shaam Mastani” on Friday, 7th April 2017 at the Ruby Ballroom, Hotel Crystal Suites in Wadi Kabir.

“Sa Re Ga Ma Pa” singing superstars, Ram Kasar, Raksha Achar and Aishwarya Rangarajan are on their toes to mesmerise the Muscat audience with their superb singing talents.

This time, the event will encompass a homogenous confluence of Instrumental Fusion Music, evergreen melodious film songs in Kannada and Hindi, dazzling dance performances and also a presentation of “Retro-to-Metro” songs. It will certainly be one of a kind. The musical convergence of these artistes in an aesthetic ambience over a lavish dinner is going to be a unique endeavour and effort of Spandana Team.

During the past 4-5 years, the zeal and interest elicited by the Spandana Team through their various programmes like “Sangeeta Lahari”, “Yaadon Ki Baraat”, “Raag Anuraag” and “Shaam-e-Sargam” has evoked passion for melodious music among the music lovers of Oman.

Raksha started singing at the age of 2 and has been learning music under the tutelage of her mother Bharathi Ananthachar. She has now emerged as a versatile vocalist and is trained to perfection. Raksha participated in more than 6 TV Reality Shows in Kannada, viz. Yede Tumbi Haaduvenu, Sa Re Ga Ma Pa Little Champs-2, Saptha Swara, Super Stars, Star Singer, Yede Tumbi Haaduvenu (seniors) and Sa Re Ga Ma Pa, Season-11. She was awarded the title “Sangeetha KalaaSharadhe” at the age of 12 in Kumuta, Makkala Mane. Raksha is currently pursuing her bachelor degree in Music at Bangalore University.

Aishwarya Rangarajan is a versatile artiste. She started her journey in music at the age of 4. Initially, she learned Karnatic Classical Music from Usha Jagadrakshakan. Currently, she is learning Karnatic Classical Music, Veena and Light music from Vidhwan Suchethan Rangaswami. She is also a B-grade Akashavani artiste and has rendered several devotional songs and light music compositions. Apart from Karnatic classical music, she is equally good in western music.

Aishwarya has participated in some of the very popular television reality shows like “Ede Thumbi Haaduvenu”, “Sa Re Ga Ma Pa Lil Champs”, “Voice of Bengaluru” and has been the Runner-up in all these shows. She is also the second runner up in the most popular Singing Reality Show “Sa Re Ga Ma Pa Season-11” which was judged by the leading playback singers and music directors like Arjun Janya, Rajesh Krishnan and Vijay Prakash.

Aishwarya has also worked with a lot of renowned musicians like N S Prasad, Veena Varuni and so on. She has sung for Nadha Brahma Hamsalekha, Arjun Janya and Raghu Dixit, few of the very popular and acclaimed music directors of Sandalwood.

She has rendered her voice for title tracks for tv serials like Ganga, Vaarasdaara, which air on popular Kannada TV channels. She has also performed in Thurupathi. To cap it all Aishwarya has already done playback singing for several Kannada movies, to name a few, Kaplana-2, Happy New Year, Duniya-2 and is turning out to be a promising singing star in Sandalwood and other film industries.

Zee Kannada SA RE GA MA PA Season-11’s first runner-up. He is titled as “Junior SPB” by Kallaiyya Ajja, Pandit Puttaraj Gawaigala Aashrama Gadag. He has performed more than 1000 stage shows across Karnataka and awarded Star of Uttar Karnataka, Star of Dharwad, Start of Belgavi. He was also the winner of Hadina Bandi singing show organised by Kasturi channel.

He was born on 23rd April, in Gadag Dist, Gajendragada. Completed his B.Music from Karnataka University Dharwad and Master’s in music from Mysore University and presently pursuing PhD in Music from Dharwad University.

In his 12 years of musical journey, he has been trained by many masterminds of music in Hindustani Classical, Karnatic and other forms of music and one of those is Pandit Maniprasad Guruji, a Padma Bhushan awardee, Dr Gangubai Hanagal Gurukul, Dharwad. It has been more than 5 years he is practising Hindustani classical music vocal under the tutelage of his Gurus. He also has sung devotional songs for Jain DigambarJangalwale baba and these audio CDs released all over North Karnataka were a huge hit.

He is widely recognised all over Karnataka from a singing reality show organised by Zee Kannada (SA RE GA MA PA Season-11), where he secured runner-up trophy. He has been selected as a jury member in SA RE GA MA PA Season-12. He recently sang for magical music composer Arjun Janya, for the film “Naane Next CM” starring sandalwood star Ragini Divedi and also for the film “Cheluvina Chandira” music directed by Shivasapthami, there are many songs under recording process.

He has performed in many stage shows organised by Sumana Art Center and the Yuva Chethana Prathibimba Cultural Events in Gayana Samaj and Kalasoudha. He is comfortable with all kinds of music, be it western, filmy, folk or classical.

Spandana is a group formed in 2011 with a strong conviction and a striking message “together we can make a difference”. During the past 5-6 years Spandana has tried its best to promote Indian art & culture through musical shows, thereby has given around 15-20 budding artistes an international platform to perform in Muscat.

The logo too depicts Spandana’s vision and its humble endeavour to embark on their fifth milestone “Yeh Shaam Mastani”. Spandana means emotional heartbeat or vibration to reach out, which essentially is within every human being and can be roused from within.

Spandana Muscat has already carved a niche in Muscat by organising such high-quality musical programmes which have been appreciated by one and all. Spandana team feels very proud and honoured that our last four musical extravaganzas attracted a huge number of audiences and had kept the music lovers spellbound for more than four hours, which is a record.

Spandana Muscat is highly grateful to all its esteemed sponsors, well wishers and audience for their unstinting encouragement and overwhelmingly generous support without which it would not have been possible to organise such programs and also to carry on with our social message “together we can make a difference.”

Thank you Madam Violet Pereira and team Mangalorean.com for your kind support. Much appreciated. Spandana team is trying its best to make a grand success of this musical event. Its Spandana’s one more sincere effort to give an international platform to budding artists, so that it helps in their future endeavours.

For Several years spandana was in limelight for various charity activities, blood donation, social service , cultural activities , Musical programmes etc. Nice to hear again Spandana organizing a Musical event . It is commendable that Spandana has been supporting budding artists by providing an international platform , with limited resources. May god the selfless acts of Prakash naik, Riyaz Ahmed and Spandana team