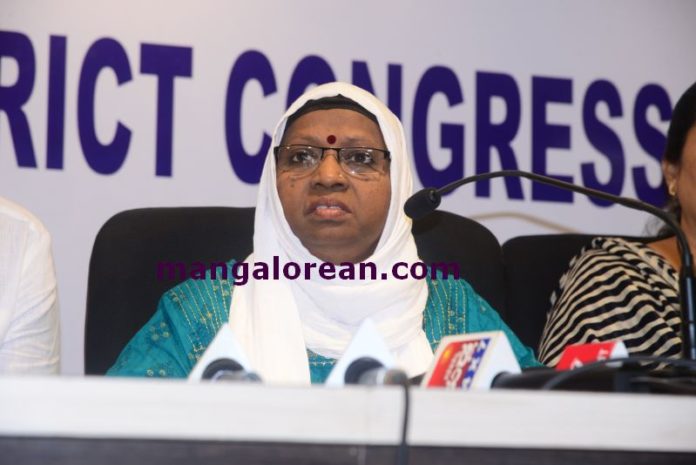 Mangaluru: “I was serving as a corporator in Kunjathbail 15th ward from 2002 to 2007. I had very actively participated in the party work and in 2013 the party leaders had given me an opportunity to contest from the Derebail 25th ward from where I was elected corporator. Since then I have done all the development work with integrity. Recently, environmentalist Sashidhar Shetty has made and uploaded videos in the social media alleging my involvement in corruption with the development work I had undertaken in my ward. As my health is not good such videos have mentally and physically affected me. Sashidhar Shetty is defaming me by sharing wrong information through the Social Media”, said former corporator Nagaveni in a press meet held at the DCC office Mallikatta, here on August 14. 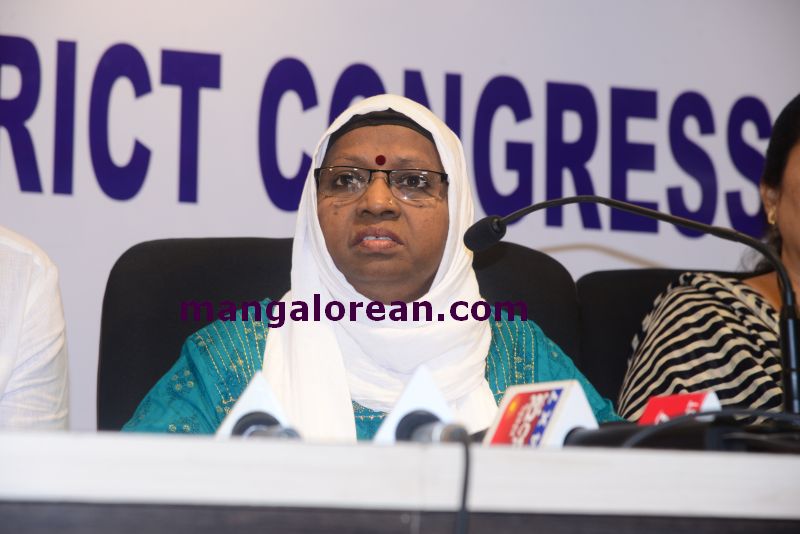 Addressing the mediapersons Nagaveni clarified on the allegations by Sashidhar Shetty and said, “In the first video, Sashidhar has alleged that I had received Rs 5 lakhs for the roof work of the autorickshaw stand at Ashoknagar through cheque. He has also alleged that the total amount spent for the roof work was only Rs 1.16 lakh and that the contractors have yet not been paid. If Sashidhar’s statement is right then where has the Rs 5 lakh cheque gone? A thorough investigation should be done in this case. In the second video, Sashidhar has alleged that I have taken Rs 4.5 lakh for the Chanda Chandishwari Kshethra well development work through cheque which is far from the truth. During the water crisis, I requested the concerned authorities to sanction funds to develop the well near Chanda Chandishwari temple. Accordingly, an estimate of Rs 4.5 lakh was prepared. But since the well is in private land, we had dropped the idea of developing the well. I have all the necessary documents with me and I am ready for any investigation”.

Nagaveni further said, “When the people of Dominic Church requested the then-mayor Kavitha Sanil to sanction funds for the construction of a retaining wall of Dominic Church, Kavitha Sanil sanctioned Rs 20 lakh but Sashidhar Shetty has put false allegations that the bill was Rs 25 lakh. The actual bill for the construction of the retaining wall was only Rs 16.87 lakh”.

Nagaveni clarified and said, “The parish priest of Dominic Church had again requested me to reserve Rs 5 lakh from my funds for another retaining wall which I had informed the MCC to reserve Rs 5 lakh from my funds. The contractors have signed the contract but the work has yet to be started. Sashidhar Shetty has also used my photograph in the video saying that I have misused public money. In the video, he has also questioned whether it was my father’s money to be misused? These videos without any truth have been circulated in social media. I am suffering from health issues and undergoing treatment along with chemotherapy. The false allegations and the videos circulated on social media have physically and mentally hurt me a lot. Being a woman I have done my work with honesty and integrity. If there are any problems or misappropriation of funds, he can go and file a complaint with the concerned authorities. Instead, he has made videos and shared them on the social media to defame me which is a crime. It is the duty of the officials to check the quality of work and do the payment to the contractors”.

Nagaveni also said, “Sashidhar Shetty being an environmentalist had recently asked me about planting saplings in front of his house where the road construction was in progress. I had advised him to plant the saplings on the opposite side of the road. On that day he sent a girl to my house to invite me to the sapling planting programme. When I went to that programme, he insulted me using the same girl for which I did not respond but locals took Sashidhar Shetty to task for insulting me. I have no idea why he is targetting me with false allegations. If I have done anything wrong, he is free to file a complaint. Last week when he shared a video targetting me on the Social media I went to his house to meet and speak to him, but he did not come out, his daughter said that he was sick, at the same time Sashidhar was standing on the terrace and using foul language against me. After that incident, I filed a complaint against him in the Urwa police station.”

Sashidhar Shetty Defaming me with Wrong information about Development through Social Media- Nagavenihttps://www.mangalorean.com/sashidhar-shetty-defaming-me-with-wrong-information-about-development-through-social-media-nagaveni/