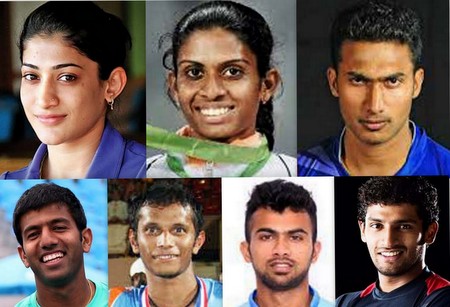 Say ‘Cheerio’ to Seven Olympians from Kodagu at Rio!

Madikeri: It’s a tiny district of Karnataka with a mere 4,102 sq kms of expanse and a population of just 5.5-plus lakh. Yet, what makes Kodagu so special?

A research and survey done by a media colleague, B C Dinesh, reveals that the district has contributed to the Indian armed forces, besides the two distinguished Generals – Kodandera Madappa Cariappa, to be honoured as Field Marshal many years after his retirement and Kodandera Subbaiah Thimayya who were cousins from the same Kodandera clan – over half a dozen Lt Generals, seventeen Major Generals, four Air Marshals (including Kodandera Nanda Cariappa, son of the late Field Marshal) and an Air Vice Marshal, three Commodores and hundreds in the lower ranks, who have brought name and fame to this place known for its hilly terrain and verdant greenery.

Many of them have been decorated with gallantry and service awards. Women have not lagged behind. A number of them like Lt Col B M Parvathy, Major Smitha and Wing Commander Vilma Muddappa have been serving in the Army and Air Force.

If the martial tradition of the district has been held high by them, the sports and athletic field is the other sector Kodagu is known for. Athletes like A C Pushpa and Ashwini Nachappa, besides many others, have done the country proud at the global level.

Hockey is another field dominated by Kodagu for decades. The list is quite long. The district has given a number of players to this game, many of them having been members of Team India and taken part in the Olympics.

Top names are those of Mullera P Ganesh and Maneyapanda M Somaya, who have been India captains, besides Arjun Halappa. Arjuna awardee Dr Anjaparavanda B Subbaiah too played for the team for many years. The names here are only for representative purpose.

Those were the days when at any given point of time, there used to be three or four Kodagu players in the Indian hockey team. The number had slumped over the years. There are signs that the days of glory may make a comeback soon.

Out of the total members of the Indian contingent to the Rio Olympics, eleven hail from Karnataka and the lion’s share is of Kodagu with seven. Among the 16-member hockey team, four are from Kodagu. They are Somwarpet Vittalacharya Sunil, V R Raghunath, Sannuvanda K Uthappa and Chendanda Nikkin Thimmaiah.

It is also the first time that four from Kodagu are representing India in the Olympic games. In the past, besides Ganesh, Somaya and Subbaiah, others who played in Olympics were Baleyada K Subramani, Cheppudira S Poonacha and B P Govinda. Former captain Somaya has been a three-time Olympian.

For Raghunath, Uthappa and Sunil, Rio is the second Olympian outing. Nikkin Thimmaiah is making a maiden Olympian appearance.

In other games and athletics, Machettira Raju Poovamma is taking part in the 4×400 relay run. Machimanda Ashwini Ponnappa will play with Jwala Gutta in the women’s doubles badminton. Experienced Machanda Rohan Bopanna will tie up with another senior Leander Paes in men’s doubles and also in mixed doubles with Sania Mirza.

This could be an areawise record for any district in the country to share the honours in the national teams. Other Karnataka members are Vikas Gowda in disc throw, Ashwini Akkunji in 400 metres sprint, Prakash Nanjappa in shooting and 18-year-old Aditi Ashok making her debut appearance in golf.

So, cheerio, all the best at Rio!