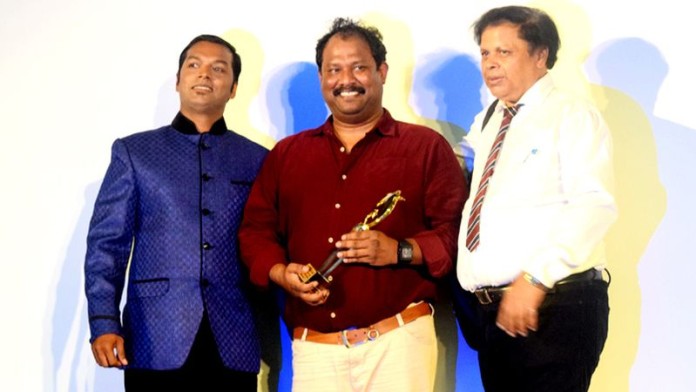 Kuwait: Konkani drama and musicals have entertained Goan masses in Kuwait for a long time. Many enthusiastic directors have come up with renewed ideas over the years to enhance the art, promote kala and Konkani.

Nazy Rod is one such passionate director who arranged his much-acclaimed drama ‘Ghonvddo’ (Mason) in a‘Live’ & ‘Screen’ show on 3rd June 2016 at Carmel School Auditorium, Kheitan.

A colourful souvenir was released on the occasion in the midst of a very friendly and cooperative crowd.

Well-knownGoan singer Seby de Divar was the star attraction of the show. The famed singer energised everyone with 3powerful solos and his trademark orations between the songs. Seby sang on different themes and was encored repeatedly for all his songs.

This is perhaps the first time that a single star from Goa (other than Lorna and RemoFernandes) was brought to entertain Kuwait and Seby de Divar, for sure, lived up to people’s expectations.

Much admired Kuwait Trio Cajetan de Sanvordem-Mario de Majorda-Michael D’Silva were at their supreme best with a song that had melodious rhythm, brilliant voices and a modern subject applicable to all generations. The trio received thunderous applause and encore; they acknowledged singing a different version each time they came back.

Pitu Ferns sang a‘decent’ solo on miraculous St. Anthony while Baltazar Pontes solo was much applauded by the crowd for a repeat performance.

The absence of ‘Lopes Brothers’ – singer brothers Alex and Michael, a part of the production, was definitely felt.

The musical score for the ‘live’ show was single-handedly provided by Maestro Shahu Almeida. Sound & Lights were arranged by Anand.

Gasper Crasto compered the show along with Nazy Rod’s son Anson Rodrigues which kept people guessing what will come next. Anson kept everyone absorbed with his unique compering in English and distributing prizes galore.

A special prize for the souvenir was won by Rocky.

Stage manager Lawry Miranda was engrossed behind the stage while other volunteers and supporters did their part well.

The show began with ‘live’ songs followed by the screening of the ‘tiatr’ that was earlier staged in Kuwait back in 2012.

It was no surprise some of those who watched it earlier came to see it again.

While a ‘live’ show is fascinating any day, the screening of ‘Ghonvddo’ was graciously respected by the audience especially for the efforts of the director in organising a show for an entertainment-short Kuwait audience.

Perhaps it was the title ‘Ghonvddo’ (mason) that left everyone stuck to their seats till the end. The drama conveys a message that everyone is accountable to be a ‘Ghonvddo’ of their own homes, a master of their own fate for the success or disaster, happiness or failure in life.

Award, Memento & A Dictionary in Presentation

The award, a glass trophy, was bestowed upon the maestro on behalf of the Kuwait Goan community.

AmodernEnglish-Konkani Dictionary devised by IsidoreDantas and Joel D’Souza was released during the break at the hands of Bab LinoDourado, Konkani poet and writer. DomingosAraujo and Gasper Almeida of Goa World were also present during the release.

In his statement, director Nazy Rod thanked the Arab Times, Indians in Kuwait, Times Kuwait, the entire star cast that performed in the ‘Live and Screen’ show of ‘Ghonvddo’,and for the presence and support of all audience.