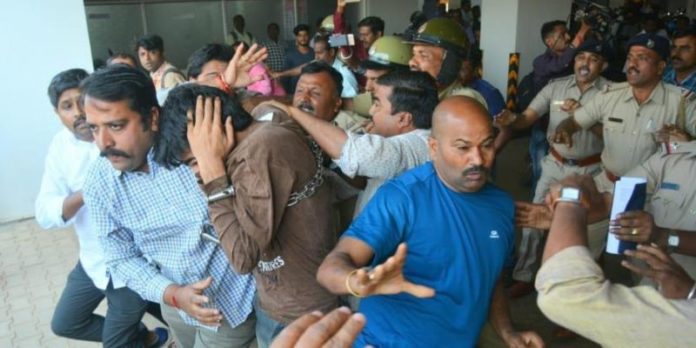 Hubballi: Tension prevailed at Hubballi court on Monday while the police were taking out the Kashmiri students who were arrested on Sunday late night on the charges of sedition.

The three students were seen raising pro-Pakistan slogans in a viral video after which they were detained by the Hubballi police. On Sunday though police claimed to have released them on a bond, they once again rounded them up and produced before the court on Monday morning.

It is said that public outcry and protests on Sunday night promoted police to arrest the students. The arrested Basit Aashiq Sofi of Sem Pora village in Baramula district, Talib Majeed of Krandigam in Anantnag district and Aamir Mohi Uddin Wani of Batkote in Anantnag district are now been handed over to the police. While two of the accused are studying in the first semester and one is studying in third semester of civil engineering. Under the Government of India quota the trio had got seats at the KLEIT in Hubballi.

On February 14, the video had gone viral where they were seen raising pro-Pakistan on the background of a song. The video was leaked on social media on the same day night and Gokul Road police detained the students and booked cases under IPC sections 124-A (sedition), 153 A and B on Saturday. On Sunday they were released briefly on a bond under CrPC Section 169.

Condemning the release of the students, members of VHP, Bajrang Dal staged protest in front of Gokul Road police station on Sunday night for more than 3-4 hours. Following the huge protest, the police arrested the trio on Sunday night and produced them in court on Monday.

Meanwhile, the Hubballi Bar Association has passed a resolution stating that advocates from the association will refrain from providing legal aid to three arrested students.