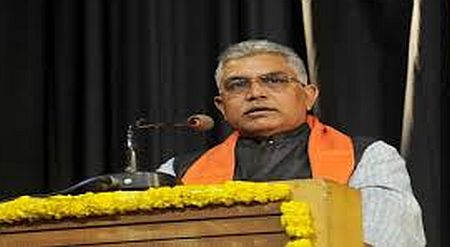 Kolkata: West Bengal Bharatiya Janata Party (BJP) chief Dilip Ghosh, here on Saturday, went ballistic over protests against the new citizenship law (CAA) at Shaheen Bagh in Delhi and Park Circus, here, saying some “uneducated, burqa-clad poverty-stricken women have been made to sit on the road for money and biryani” and to listen to speeches of leaders, like P Chidambaram and Brinda Karat.

“Some uneducated, ordinary, poverty-stricken people, who lack consciousness, have been made to sit on the road. They are being given money and fed biryani daily, that too out of funds coming from abroad,” Ghosh said addressing a state BJP meeting of office-bearers, MPs and MLAs.

The objective of Shaheen Bagh or Park Circus was to show that people were with them, he added.

Targeting senior Congress leader Chidambaram and CPI-M politburo member Karat, the BJP MP said, “I am surprised. National leaders of lot of parties come to Bengal, but nobody listens to their speeches. So people like Karat or Chidambaram address gatherings at Shaheen Bagh when they are in Delhi, or at Park Circus when they are here.

“Who listens to them? Some uneducated, burqa-clad women sitting there with their children. They are their only audience.”

Known for his penchant to kick up controversies, Ghosh last month wondered why none of those protesting in the winter under the open sky at Shaheen Bagh had fallen sick or died. People from nearby areas also visited the protest site time to time, he added.

“I wonder from where the money is coming. In the coming days, the truth will be known,” Ghosh said.

Earlier, Ghosh had threatened to “beat up” and “shoot” those protesting against the CAA and dubbed intellectuals opposing the legislation “creatures”, “devils” and “parasites”.

In the past, Ghosh had drawn flak after he termed Nobel Laureate Bengali economist Amartya Sen as “spineless” and claimed that people like him “can be purchased and sold”.

Hundreds of women are staging a sit-in against the CAA in Shaheen Bagh since December 15. On January 7, taking a page out of the Shaheen Bagh protest book, some women from the largely Muslim neighbourhood of Park Circus started the anti-CAA stir, which continues.