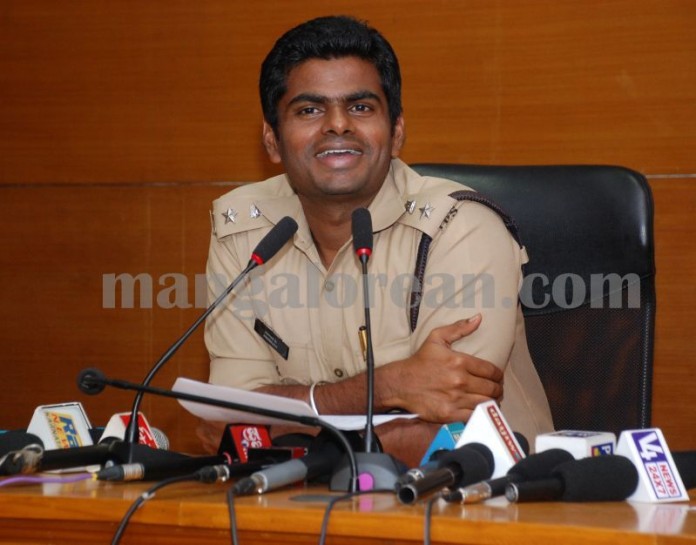 Udupi: SP Annamalai has been transferred to Chikkamagaluru district here on July 26.

There were rumours about SP Annamalai’s transfer through social media some months ago which created confusion among the people of Udupi. Annamalai has brought many changes in policing in the Udupi district and curbed all the illegal activities.

Annamalai is an able police officer and in order to make the process of filing complaints easier for the public and help control crimes, a special ‘Suraksha’ Police Mobile App was also launched him.

Annamalai is a native of Karur district of Tamil Nadu, he completed his schooling in Coimbatore. He pursued Mechanical Engineering and later completed his MBA at IIM-Lucknow. While doing his MBA in UP, Annamalai was exposed to poverty and social disparities. It was then that he decided to become a government servant.

Annamalai, an IPS officer of 2011 batch, was posted as ASP of Karkala Sub Division on September 4, 2013. This was his first posting, during his tenure, four police stations in the Karkala Sub Division – Karkala Town, Karkala Rural, Kaup and Padubidri – received ISO 9001:2008 certification. He was promoted and posted as Superintendent of Police of Udupi district and took charge on January 1, 2015.

During his tenure as SP of Udupi district, Annamalai K has not just won the confidence and hearts of the people but has also earned the name “Udupi’s Singham”. He not only has good crime detection skills but has put a check on criminal activities like matka, murder and theft in the district. After he took charge as SP, he has brought about a lot of change in Manipal which is known as an international education hub. He has restricted illegal activities in and around the Manipal area.

When Mangalorean.com contacted Annamalai, he said, “I am satisfied with my work here in Udupi district.” He thanked everyone from the district for their co-operation.