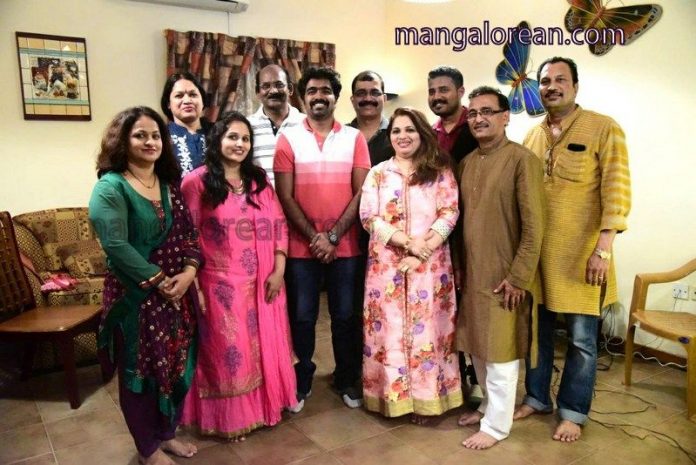 Oman: Spandana Muscat created history by launching a Kannada/Tulu music album titled “Zeal & Zest” (musical ripple) in Muscat last week. The man who made it possible was none other than the shining star of Sandalwood, the musical maestro RAVI BASRUR. It was a moment of pride and privilege for Spandana team to felicitate and honourRavi Basrur, who is currently one of the most sought-after music directors of Kannada film industry having given dozens of hit songs in past couple of years.

Ravi Basrur was here in Muscat on a private visit for about 3-4 days. His original plan was to see some beautiful locations for his next film. Spandana Muscat took this opportunity and organized a felicitation ceremony in honour of Ravi Basrur’s glorious achievements in the film industry inviting some closely connected Spandana members, local singers and distinguished sponsors. During the ceremony, Ravi Basrur was honoured with the traditional floral bouquet, garland, a shawl, fruit basket and a memento. Local singers presented melodious Kannada/Hindi songs on Karaoke to keep the music lovers entertained while Basrur was closely observing the local talents.

Impressed by the prevailing talents and overwhelmed by the enthusiasm of local singers, young and old, Ravi Basrur shared an idea as to why not we use these singers and make an album. Within no time Spandana team got into action and made all the required arrangements, i.e. for the audition, venue, recording, launching etc.

During the interaction, Ravi Basrur imparted his life experience story to the singers and members which highly inspired all of them to think differently and to do something different together to bring out a new change in the society for the benefit of the mankind.

Spandana Muscat expressed its great appreciation and gratitude to Ravi Basrur for accomplishing the unimaginable and a daunting task of launching the music album in such a short time and sharing his in-depth knowledge about music and the film industry.

“Not all buds bloom and not all those that bloom become fruits”. Understanding this ground reality, over the past few years, Spandana Muscat has been making its sincere efforts in identifying and showcasing the talents of truly deserving artists (not necessarily celebrities), thereby giving them an opportunity and international exposure, be it musicians, instrumentalists or artists of any other performing art, like Yakshagana. In addition, Spandana Muscat is also trying to reach out to various humanitarian causes such as blood donation, charity works, assisting the needy and downtrodden etc.

Some of the events presented by Spandana Muscat in past few years are“Sangeeta Lahari” in 2011 with Ravindra Prabhu and Anita D’Souza, “Yaadon Ki Baarat (Nenapinangala)” in 2012 as a tribute to Late Padmabhushan Dr Rajkumar and Late Padmashree Mohammed Rafi with Tagore Das, Naveen Koppa and Sangeeta Balachandran, “Raag Anuraag” in 2013 by Sunita and Shreenath with special magic show by Om Ganesh, Musical evening to felicitate Guru Kiran who was on a private visit, Mega “Blood Donation Drive” in 2014, “Shaam-e-Sargam” in 2015 with Prarthana Chowdhury and Naveen Kumar, “Yeh Shaam Mastani” in 2017 with Shri Ram Kasar, Aishwarya Ranganathan and Sri Raksha (Zee Kannada SaReGaMaPa finalists).

THANK YOU MANGALOREAN.COM FOR YOUR CONTINUED SUPPORT.

Happy to see this article, hearty thankful to SPANDANA team especially Mr. Prakash naik who is well know person in Muscat social activities and supporting so many hidden talents to bring them to light, the team name (SPANDANA) itself abbreviating the goal of it (MOTIVATING ALL), Really I am glad to be part this musical ripple, thank you to all team member behind this achievement (Mr. Riyaz/Mr. Nagesh/Mr. Zubair/Mr. Niranjan) To say about Ravi basrur sir this comment box is not enough, in 3 days I have learned many things from him, anybody can do anything, nothing is impossible, and… Read more »