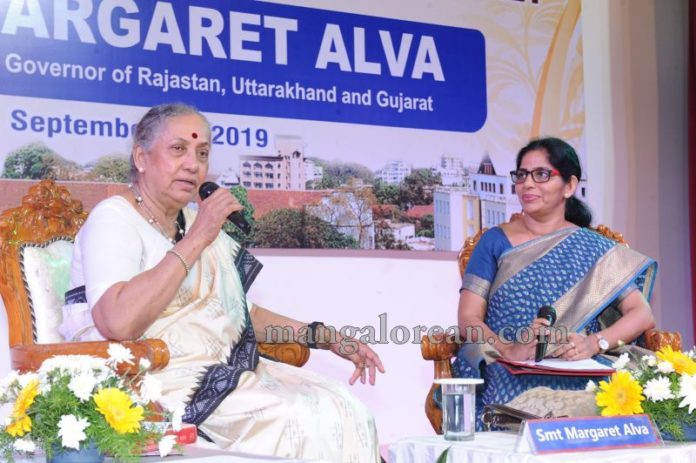 ‘Stand Up With Courage & Face the World. You’re the India of Tomorrow’- Smt Margaret Alva

‘Stand Up With Courage & Face the World. You’re the India of Tomorrow’- said Parliamentarian and former 29th Governor of Rajasthan; Former 17th Governor of Goa; and Former 4th Governor of Uttarakhand Smt Margaret Alva during an Interface on “Reminiscences of a Political Journey” organized by the Dept of Political science of St Aloysius College, Mangaluru at LCRI Hall, on 11 September 2019.

Mangaluru : A Great Parliamentarian, youngest to be elected to Rajya sabha in the year in 1974, and serving five times as MP- four times to Rajya Sabha and 5th time to Lok sabha, her saga from of being a party worker to a Minister was explained by her, while answering the questions during this interface. A great debater in her young days with commendable leadership skills translated into political dynamism was to be a great inspiration to the young minds in this programme. 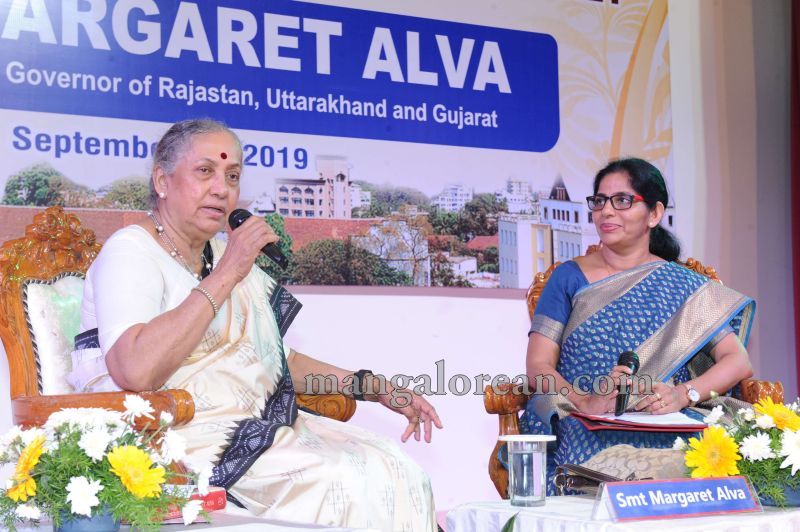 She during her 30 years in the Indian Parliament, served on some of Parliament’s most prestigious committees viz, the Committee on Public Undertakings (COPU) , the Public Accounts Committee (PAC), the Standing Committees on Foreign Affairs, Tourism and Transport, Science & Technology and Environment & Forests, and all the four major committees that involved Women’s Rights viz, the Dowry Prohibition Act ( Amendment) Committee, The Marriage Laws (Amendment) Committee, Equal Remuneration Review Committee, and the 84th Constitution Amendment Bill Joint Select Committee for 33% reservation for women in local bodies. She served as Chairperson of the Parliamentary Committee on Empowerment of Women from 1999-2004.

The department of Political Science St Aloysius College (Autonomous), Mangaluru organised the programme- “An interface on the Reminiscences of a Political Journey” of Smt. Margaret Alva on 11th September 2019 at 3 pm at LCRI Hall. The programme employed the interview style of interaction conducted by Dr Rose Veera D Souza, The Head of the Dept of Political Science at SAC, and the questions were based on the book “Commitment and Courage- The Autobiography of Margaret Alva”, which was released in 2016. 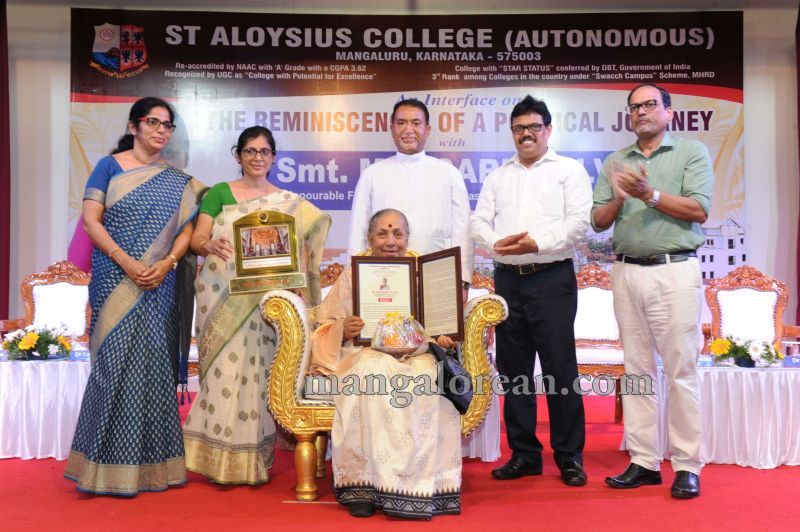 ‘Courage and Commitment—Margaret Alva’s unflinchingly honest autobiography—details her forty-year career under four Prime Ministers—Indira Gandhi, Rajiv Gandhi, P.V. Narasimha Rao and Manmohan Singh and her eventual transition from politician to Governor. As the inheritor of a legacy—the Alva’s have been associated with Indian Parliament for over half a century—Margaret Alva details her trials and triumphs and confronts the controversies that have rocked her career—her 1979 expulsion from the Congress party, her spats with Sanjay Gandhi, her role in framing Rajiv Gandhi’s last campaign tour, her involvement with the Jain Hawala investigation when in charge of the CBI, her denunciation of the manipulation of seats by her own party and the events leading to her resignation in 2008 from the post of the AICC General Secretary in charge of eight states.

At the same time, she offers rare insights into the lives of national and international political luminaries. Spanning Mangaluru, Bengaluru, New Delhi and the world at large, shedding light on family, friends and foes and detailing politics and policies, manipulations and machination, ‘Courage and Commitment’ is the story of a simple life made remarkable and is narrated with the author’s trademark candidness. The questions mainly from this Book asked during the Interface by Dr Rose Veera were directed to bring out the experiences of Smt Margaret Alva as a woman leader and her battles and struggles in politics.

Dr Rose Veera asking her first question to Smt Margaret Alva said, “Could you describe your childhood as a girl child because I remember reading in your autobiography on p. no -4 “My mother was disappointed at the birth of another daughter. – how did you face the patriarchal world?- I am sure Margaret Alva of the 40s and Margaret Alva of 2000 had a huge journey traversed.-

In reply Ms Alva said, “Mothers those days had a son stroke. My mother wept when she found that she will have a third daughter, but my grandfather consoled her saying “One should not cry at the birth of a child, she would going to be great in the future”. And also that I was born on his birthday he strongly felt that I will also become a advocate like him, but things changed a different way in my career. I had my early education in the then Mangaluru until 5th class, and later continued my studies in Coimbatore and the Mount Carmel, Bengaluru”

Q: What are your experiences as a young college student? What shaped you in your formative years ? -Your leadership traits and debating Skills- As a student, Party worker, Parliamentarian, representative of the State abroad

Ans: While studying in PUC at Mount Carmel College, I was picked by an English teacher to speak on stage and I am grateful to her for it, as I look back my journey. she picked me up saying – you are good at talking and so could be a debater. My teacher had intentionally picked me because I was very talkative girl. It was a pick and speak act and my topic was on the significance of co-education. My teacher after listening to my first speech that day inducted me into the the college debating team and from then on I began to realize my leadership qualities. My seven-minute speech in English made on the direction of the then Chief Minister of Karnataka late Devraj Urs in front of former Prime Minister Indira Gandhi, pushed me to the limelight- and it was history then”

Q: You went on to become a parliamentarian. How do you describe yourself as the young woman in the Parliament– being the youngest in the Rajya Sabha. Your experiences from a back bencher to the treasury bench. –

Ans: I had no idea till Mrs Indira Gandhi, the late PM of India picked me up to be a candidate for Rajya Sabha Elections. I had not applied for it either. It was that public speech that I made promoted me, as Mrs. Indira was impressed by it and then later as a minister in the Rajiv Gandhi Government , it was indeed a huge stride. My name included in the list of Rajya Sabha members was indeed a surprise to me. As a politician my major achievement was to get the govt recognize Siddhi Community as Schedule Tribe. I campaigned for the cause for over 25 years and finally the Centre recognized Siddhis of Uttara kannada as tribal” 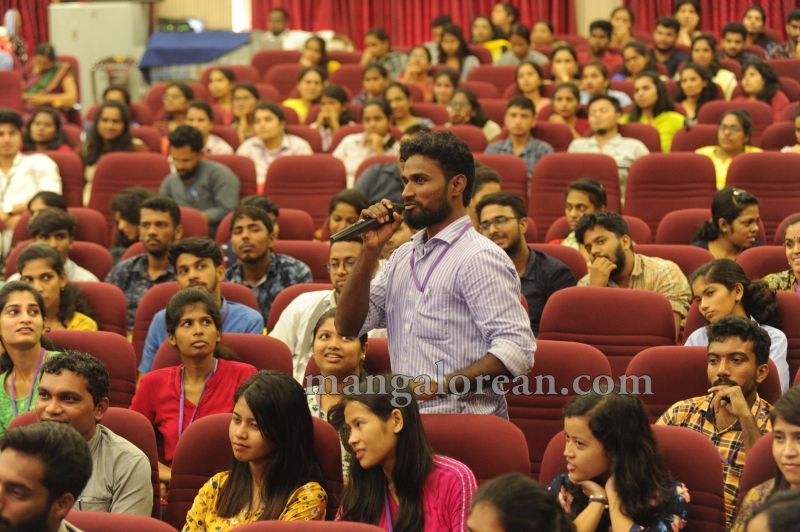 Q: What are your perceptions on patriarchy in the family and the hurdles for women- I remember reading in your autobiography that -you were a driver, a cook, a cleaner, teacher, MP and hostess rolled into one, with little time for yourself p.39 in your book?

Ans: That is true with every working woman who has to balance numerous roles and they do it willingly. It is tough when you have to manage so many responsibilities, probably easy with the help of a supportive husband.

Q: Tell us about your battle to change the situation of women in Indian airlines?

Ans: In the 1980’s in the national airlines there was a massive discrimination against women attendants. The discriminatory practices that were quite the rule in Indian Airlines. For example women could not continue to serve after 35 whereas men could still continue till 55 years of age. We had to put up a legal battle to change the situation. Me and my husband took up the fight in the apex court and the discriminatory rules of the civil aviation ministry were struck down. Winning this case for the air hostesses was the major success in my life ( smiling)” 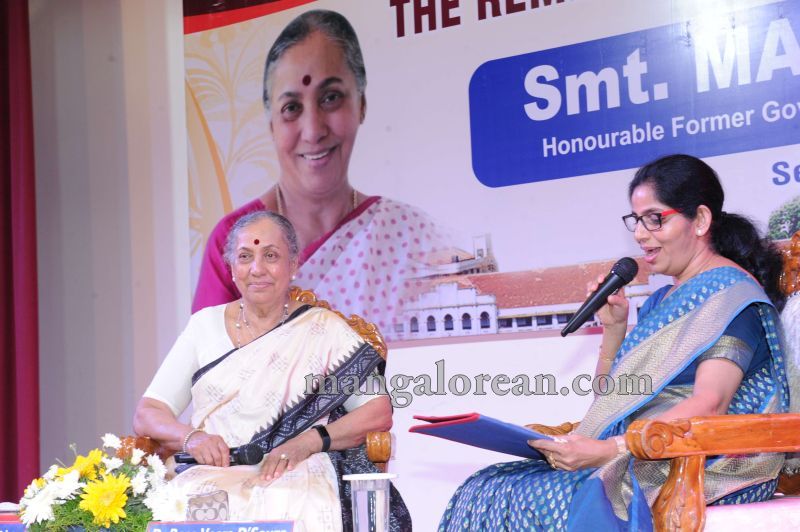 Q : Your stint in the UN as a Woman representative from India?

Ans: I have served in many women committees. In India too have contributed to women rights as a member of committees viz., the Dowry Prohibition Act (Amendment) Committee, the Marriage Laws (Amendment) Committee, Equal Remuneration Review Committee and the 84th Constitution Amendment Bill Joint Select Committee for 33% reservation for women in local bodies. As a chairperson of the Parliamentary Committee on Empowerment of Women 1999-2004.

I have worked as a founder President of “Karuna”, a Non-Governmental Organisation working for women and children with presence in 6 states which specializes in empowering women at the grassroots politically and economically and as a patron of “Tamanna”, an organization for the rehabilitation of mentally challenged children. Worked as a President of the Delhi Foundation of Deaf Women during 1975-82. I have worked hard, by balancing the role as a mother, and as a political leader.

Q: Tell us about your stint in the Lok Sabha Elections 1999- introducing 33 per cent reservations in the Parliament: ?

Ans: My involvement in the Lok Sabha Elections 1999 was by introducing 33 per cent reservations in the Parliament: It is unfortunate that 33% reservation didn’t pass. So during Rajiv Gandhi’s tenure it was taken to government at the grassroots – women participation in local governments.

The audience also had the opportunity to raise their questions. The students asked the questions on the 33 per cent reservation in Panchayats, reasons for her to quit politics, and her message to girl students. Smt Alva was flattered when a male student complimented her that she has a beautiful smile, and she proved it by giving a broad flashing smile, which led the audience into a world of laughter. 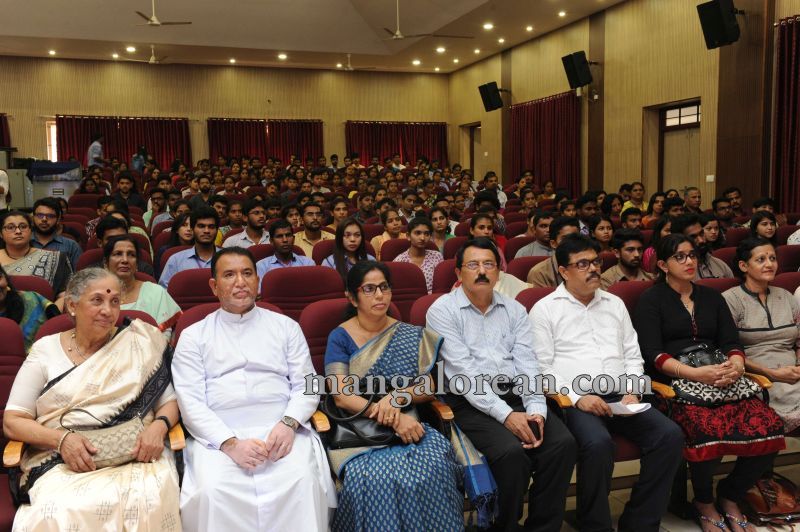 Rev Fr Praveen Martis SJ Principal St Aloysius College in his Presidential address appealed to the students to emulate Smt Alva’s example. The faculty members of city colleges, faculty of the college and St Aloysius institutions, students of both UG and PG Members from CASK and were present.