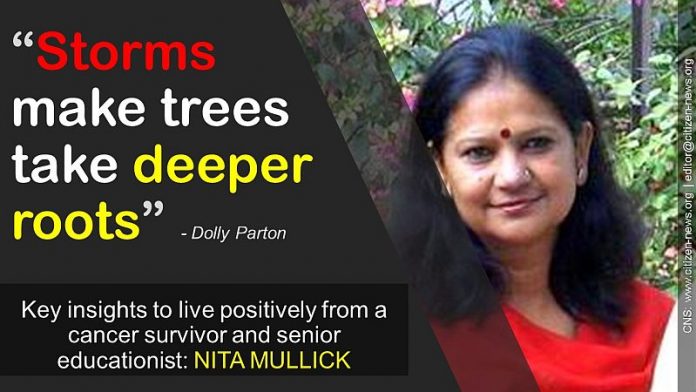 “One night, in the summer of 2013, I felt a twitch in my breast. It was something like if you hurt your toenail. Having a family history of cancer, I did not want to take any chance and promptly saw my doctor the very next day. He reassured me that there was nothing to worry, more so because there was no lump.”

“But I insisted for a test. Reluctantly, as if to satisfy my whims, he sent me for an ultrasound, and there was something amiss there. So I was asked to come the next day for a FNAC (fine needle aspiration cytology). I had no idea what that word meant. I mistook it for ‘effanacy’ and tried to google search it unsuccessfully. It was only in the hospital next morning that I came to know that it was a diagnostic procedure to investigate lumps under the skin. It was an extremely painful process. The needle had to be inserted really deep, as perhaps my cancer was just in its infancy and embedded deep in my breast. In 2-3 days time, the biopsy confirmed the diagnosis of cancer. My doctor suggested immediate surgery and me, as well as my family, agreed to it. My whole world was turned upside down within a few days’ time. My summer vacations had just begun and I was all set to visit my daughter in Sydney who had delivered a baby. Instead, I landed on the operation table. Strange are the ways of God!”

This is the story of Nita Mullick – a gutsy lady – who candidly shared with CNS (Citizen News Service) her first-hand brush with the dreaded disease. She confided “I have never opened up so much to anyone before.”

A mother of two children, Nita’s first thought when the doctor pronounced the verdict was, ‘Lord I do not want to leave this world so early’. She had already lost her father to prostate cancer in 1975 and her sister had been cured of breast cancer in 2006. She knew the seriousness of her situation but made a firm decision that she will not let cancer win, rather she will win over cancer.

Post-mastectomy, Nita had to undergo 6 cycles of chemotherapy, at intervals of 21 days each. This was a very difficult period for her. Every cycle of chemotherapy (which involved intravenous administration of drugs) lasted 8-10 hours and took an entire day at the hospital. On returning home from there she would suffer nausea, exhaustion, loss of appetite, body ache and a general uneasiness that would continue for the next few days.

“But the most traumatic part was that by the second chemotherapy cycle, I had lost all my hair. More than anything else, this loss of hair was something that I found very difficult to deal with. Chemotherapy also made my skin dark, and my nails black. It was easy for the doctor to say that things will improve soon, but the time you have to pass like this looks like a lifetime. Gradually I did get over it.”

“A cancer diagnosis changes your life and the lives of people who love you. My husband, my children, and my mother worried about losing me. My friends were not sure what to say to me when they learnt that I had cancer. But the emotional support I got from my near and dear ones helped me in my recovery. Their visits lifted my spirits and will power.”

“I also found emotional support in my work. All through my treatment, I continued with my job as a teacher. I remember when, with a scarf over my head (I never wore a wig), I faced my class of 16-17-year-olds, for the first time after surgery. I could almost hear my heartbeat while waiting for their reaction. They all sat there in an eerie silence. Eventually, I gathered courage and gave them a talk on the uncertainty of life; on how life can suddenly change for anyone and at any time. I turned the sombre scenario into a positive one.”

It is nearly three years now since Nita has been off medication. She does not feel any discomfort, nor suffers from any after effects of the treatment, except that she feels very hot. “Perhaps I can now flaunt my chiffons even during winters”, she jokes. Keeping a positive attitude, eating a healthy diet, doing regular exercises, and bonding with friends and family have helped her maintain her mental balance.

It is crucial for cancer patients to be informed and prepared mentally to deal with the aftermath of surgery. Hence the acute need for counsellors and sensitive doctors who can allay the fears and doubts of cancer patients. Nurses too, especially those administering chemotherapy, need to be better trained to deal with cancer patients; and special attention should be paid to infection control, feels Nita.

“I did not know what I was to go through post surgery. My doctor did give me a broad outline of what was to happen and told me matter-of-factly – ‘You will lose hair, but then you will get better hair’. But nobody had prepared me to deal with the trauma of facing the world in those 8 months when I would be without any hair. I was left on my own to handle it. Maybe a small pep talk could have helped. I had the inner strength and so I managed, but most others cannot. Patients should be part of the treatment process and be actively involved with it.”

“I could afford to be admitted to the private ward of a private hospital. But the condition of the general wards was deplorable. A cancer patient is susceptible to catching infections, due to poor immunity. And yet the dirty toilets in the general ward were like a storehouse of infections. There needs to be better infection control, at least in the cancer wards”.

There is an urgent need to spread awareness about breast cancer and its symptoms; remove myths related to it, and encourage women to talk about it openly and to not ignore the early symptoms. All this is very important for early diagnosis, which can save lives, as delay in treatment can spell disaster. This is possible only through regular breast self-examination and medical check-ups/screening tests insists Nita.

“In my case, that ‘once-only’ twitch did not occur a second time. And so it could have been easily ignored, were it not for my being extra cautious and vigilant. I also kept a very positive attitude during the treatment, repeatedly reminding myself that it was only life interrupted, not life stopped.”

If one does get cancer, it is important to share the problem with others and not recede into a shell. “Recovery is always slow if you are on your own. I was going to school every day during the course of my treatment. My colleagues’ encouraging remarks like ‘You are looking very smart with that scarf’, would boost my morale. If I had kept sulking at home or avoided going out, things would have been worse. The feel good factor helps a lot”.

Cancer not only affects one’s physical health, it also affects the thinking process. One starts valuing life, family and friends, and stops begrudging what one does not have. It makes fighters like Nita realise that things could have been worse and that she was lucky. She sure was lucky through her grit and determination.

Three cheers for all those women (and men) who have survived daunting odds. They are there because they could!

(Shobha Shukla is CNS Managing Editor and thematic lead on gender and health justice at Citizen News Service. She has taught physics at India’s prestigious Loreto Convent for over three decades. Follow her on Twitter @Shobha1Shukla or visit: www.citizen-news.org)