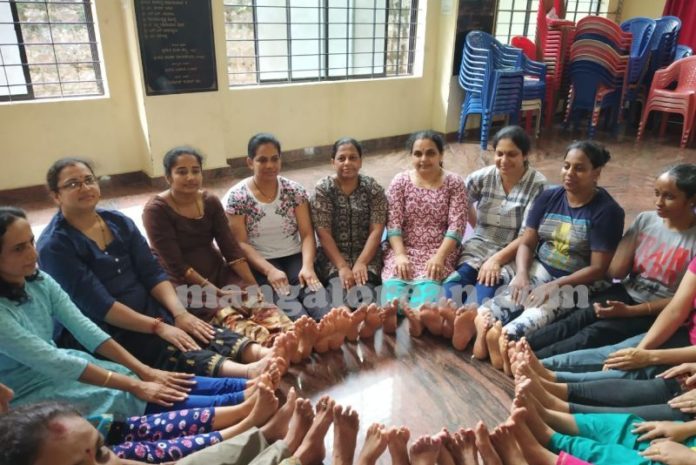 Mangaluru : “Yoga is a light, which once lit, will never dim. The better your practice, the brighter the flame”; “Although yoga has its origins in ancient India, its methods and purposes are universal, relying not on cultural background, faith or deity, but simply on the individual. Yoga has become important in the lives of many contemporary Westerners, sometimes as a way of improving health and fitness of the body, but also as a means of personal and spiritual development.”; “Yoga is the perfect opportunity to be curious about who you are.”; Yoga is 99% practice and 1% theory”; Yoga is the fountain of youth. You’re only as young as your spine is flexible”- and that’s absolutely right, as said by various renowned persons. 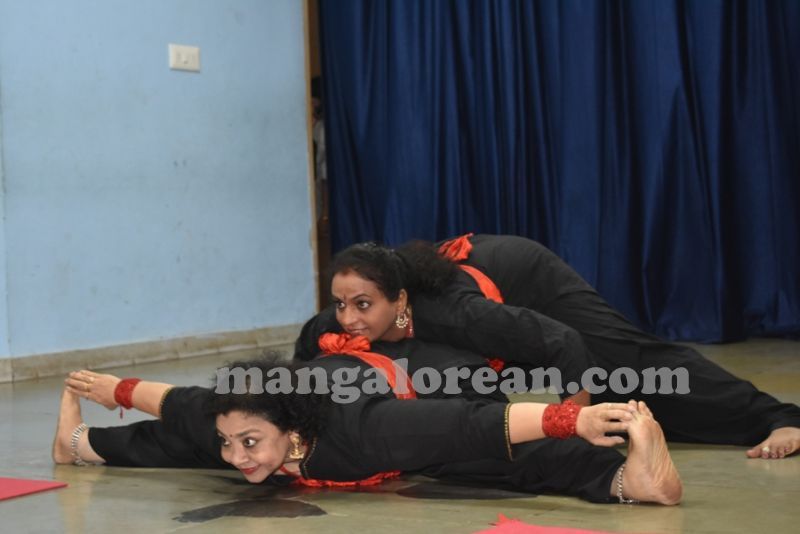 Yoga is a group of physical, mental and spiritual practices which originated in ancient India. International Day for Yoga was declared unanimously by the United Nations General Assembly on 21 June in 2015. Since its inception, International Day of Yoga is celebrated annually all over the world- and we all should be proud that YOGA was originated in India, which is getting popularized in Western Eastern and other Asian countries. And locally, here in Mangaluru there are a bunch of organizations/NGO’s and even education institutions that are trying hard to promote Yoga, which is already getting a good response from people of all walks of life-from Teenage, Youth, Middle-age, and even those in their golden-ripe age of 70’s, and 80′ plus. 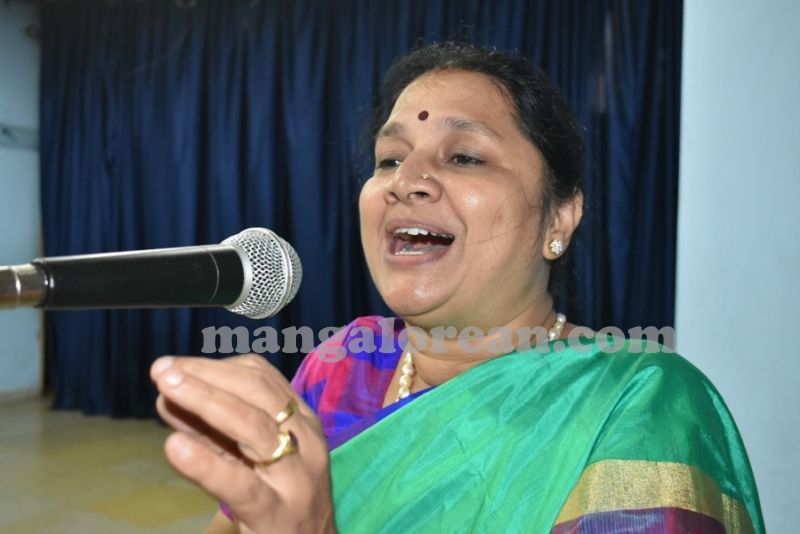 Among all these yoga trainers in town, there is one lady who is winning the hearts of her trainees and general public is Yoga Expert Ms Devika Purshotham, holding a M Sc degree in Yoga, and with Yogacharya BKS Iyengar as her Guru, she has specialized in Yoga and is a National, Asian and an International Yoga Examiner and Coach. Wow- one should be privileged and lucky to get trained in Yoga under Ms Devika’s guidance. Known to be the best Yoga expert in the town, Ms Devika has immense experience teaching students of India and other parts of Asia. And the best part is that, she has doctors who train under her as she has specialized in prenatal and postnatal yoga. “Its a joy to hear her talk people into taking up Yoga which has a cure for all ailments”said Prof Maria D’Costa-the Director of Uxcel- a Institute of Excellence. 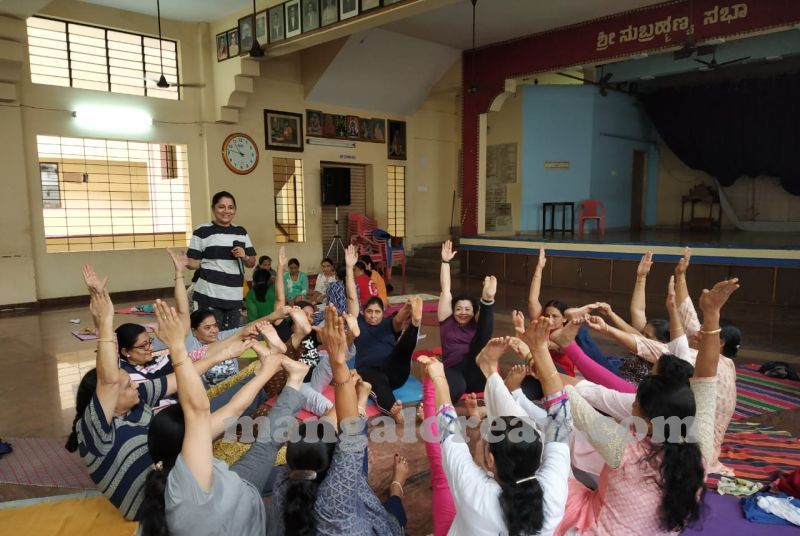 Ms Devika had conducted Yoga classes for ladies of all ages, at Subramanya Sabha Bhavan,Jail Road- Mangaluru, from 13th June 2019 till 21st August 2019, where nearly 80 ladies of different age group had participated in this batch. Participants who took part on International Yoga Day held on 21st June were presented with certificates issued by The Online World Records.The valedictory program of this two month Free yoga program was held on 21st August 2019 at 5 pm at the Sangha. The programme began with a prayer to invoke God’s blessings, followed by welcome address by Ms Vanitha Santhosh. 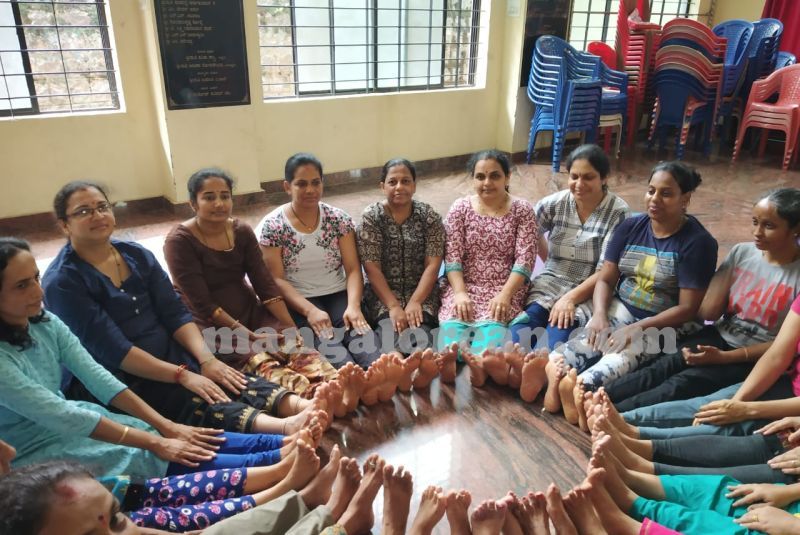 The programme was inaugurated by lighting of the lamp by Chief Guest Dr Ravish Thunga- HoD of Psychiatry Dept at A J Institute and Research Centre, Mangaluru and also a leading Psychiatrist in Mangaluru, joined by guest of honor- Harsha Kumar Kedige-the President of Subramanya Sangha Bhavan, and Ms Devika Purshotham-the Yoga instructor. A bevy of participants from the 2-month Yoga camp shared their testimonials about their experiences and benefits gained from the Yoga classes conducted by Ms Devika. 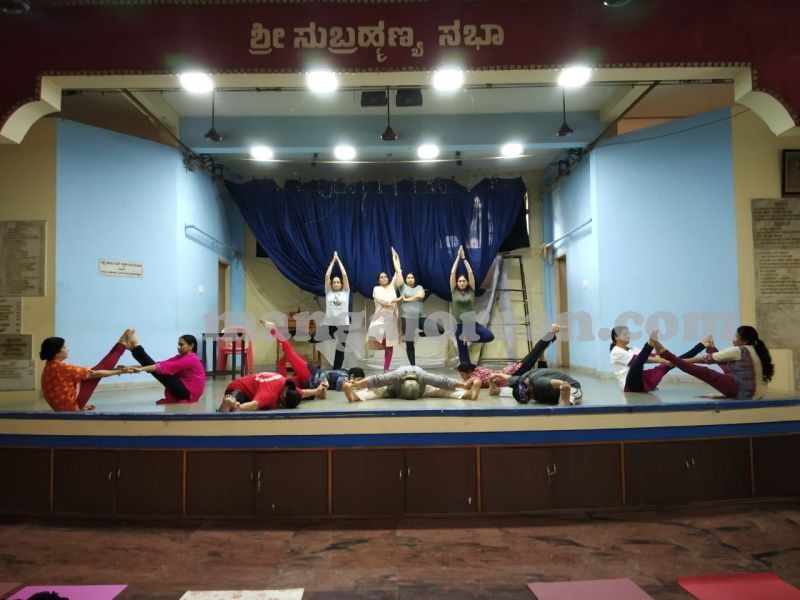 Ms Savitri Shetty, one of the participants who is a cancer survivor, and also ailing from Kidney and eye problems said, “This Yoga camp conducted by my Yoga guru Ms Devika P has worked great miracles in my life. Even though I am a cancer survivor, and also having symptoms due to kidney and eye problems, I still took a bold step by accepting the gauntlet in joining this yoga training camp.Believe it or not, the 2-month Yoga training has brought a healing touch to my health problems, and I can see much better than before. Therefore I say, Yoga is not a punishment, even though it is a little hectic to practice. All you have to do is keep trust in Yoga, which I did, and you’ll see great results in your health and lifestyle. Thanks a million to Ms Devika- I would forget God, but would not forget my Yoga Guru Ms Devika for making a difference in my life”. 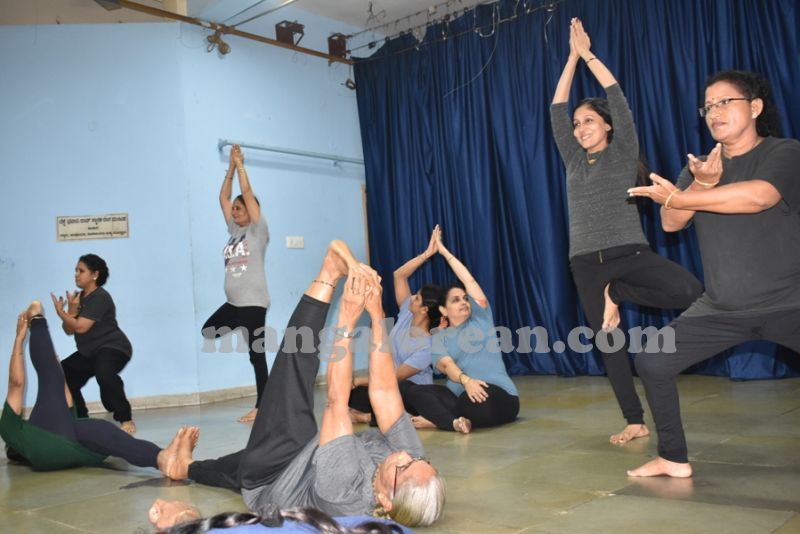 Another participant Ms Shaila said, “I had stage fear before I joined this yoga session, but now after two-months of vigorous training I can face a audience without any stage fear. This Yoga camp has indeed made a difference in my lifestyle, and I feel much better and active than I was before joining the yoga camp under the leadership of Ms Devika”. Ms Shalini Shetty, another participant said, “The Yoga classes that I signed up for under the leadership of Ms Devika was the best decision that I made, because it has now given me a peaceful and healthy life. Ms Devika’s compliments during the training like “Superb”, “Awesome”, “Great”, “Wow” etc gave us more boost and enthusiasm to actively take part in the yoga session”. Ms Bharathi Jagadeesh, Ms Sashi Shetty, and Ms Shailaja Shetty were the other who expressed their thoughts on the Yoga camp. 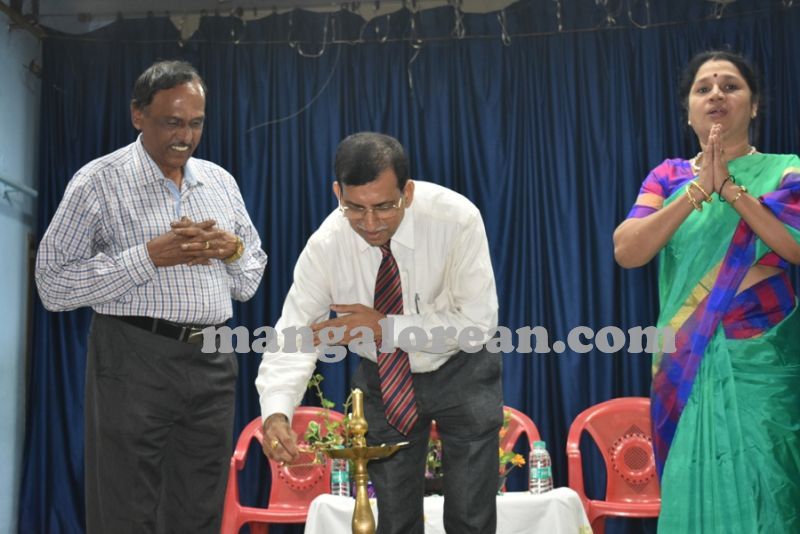 In his inaugural address chief guest Dr Ravish Thunga complimenting Ms Devika Purshotham and all the participants of the Yoga classes said, “Listening to all the testimonials a few of the participants just gave has really touched my heart that yoga can work miracles in peoples’ lives, if taken yoga seriously. The efforts put in by yoga instructor Ms Devika has worked wonders and has been successfully fulfilled. When I lost two of my brothers, after which I was very nervous and not active like before. It was one of my friend who advised me to take up yoga to overcome by stress and nervousness, which I did, and the results from doing yoga was phenomenon”.

“I became more energetic, active, enthusiastic, determined more than I was before. Maintaining a regular yoga practice can provide physical and mental health benefits. Like yoga, the psychiatric approach to wellness focuses on your body’s natural tendency toward health and self-healing. The purpose of yoga is to build strength, awareness and harmony in both the mind and body. The relaxation techniques incorporated in yoga can lessen chronic pain, such as lower back pain, arthritis, headaches and carpal tunnel syndrome. Yoga can also lower blood pressure and reduce insomnia. Other physical benefits of yoga include: increased flexibility; improved respiration, energy and vitality; Cardio and circulatory health; improved athletic performance; among other benefits. It can also reduce stress” added Dr Thunga.

Following the formal programme , a demo of Artistic Yoga by duo ladies, namely Ms Raji Balakrishnan and Ms Poornima Prashanth mesmerized the audience with their “Strike the Pose” performance, which was followed close on its heels more Yogasanas by young ladies to young at heart elderly ladies which received loud applaud from the audience. From Surya Namaskar to Naukasana, Tadasana, Vrikshasana, Trikonasana, and many other Asanas, the participants got all their muscles in their body engaged during the exercises. Working their limbs, shoulders stretched, twisting their torso, they all juggled between maintaining postures and attempting to breathe the right way.

This ancient form of fitness with roots in India did focus on developing balance, strength and flexibility. And truly Yoga is all about pushing past your body’s limits over time- and that’s what all these Young. middle-aged and Seniors unleashed their talents during the demonstration. In conclusion, the Yoga instructor Ms Devika Purshotham gave a in depth history of Yoga and its benefits which benefits one’s health and long life. The vote of thanks was proposed by Ms Vijayalakshmi B Shetty; introduction of Ms Devika Purshotham was done by Ms Suchitra Rao; introduction of chief guest Dr Ravish Thunga was done by Ms Jayashree Hebbar; and the entire programme was professionally compered by Ms M Sudha Rao.

Mrs Devika Purshotham has completed her M Sc in Yoga with 15 years of experience in yoga training as general yoga trainer, yoga therapist and yoga trainer in prenatal and post (pregnancy) yoga. She was trained under famous international Yogic master Dr BKS Iyengar from Pune and A R Ramaswamy from Bengaluru; She is a National, Asian and an International yoga referee and coach, having received many awards and accolades in the field of yoga for training and service at Mysore, Bijapur, Raichur, Belgaum and Mangaluru..

Her recent awards are- the Best Technical and Coach Award at the Asian sports championship held at Pondicherry (2017) and also at Trivandrum (2018); the Best Yoga referee award received at International Yoga festival held at Dharmastala in the year 2017. She also provides free yoga classes for a period of one month every 3 months at various locations. G. Devika Purushotham is a talented, trusted trainer All India, All Asia and now an International coach and examiner who exudes confidence caring and kindness to the world by teaching and training people young and very young to learn and practice and love yoga so that they can lead a healthy happy and a fulfilled life. “Guru Devika “( as many address her) she is proud to be the student of Padma Vibhushan Dr. BKS Iyengar of Ramamani Iyengar yoga Institute- Pune.

She has specialized in pre natal and post natal yoga ( pregnancy yoga) a specialization very useful to Gynaecologist, pregnant women.
Now she has received the prestigious Torch Bearers for Yoga award for being co ordinator for one million people performing Yoga on June 21st 2019 for developing a Healthy Generation through Yoga at the International Yoga Day Celebration. Guru Devika doctors and trains autistic children to lead a healthy life. She has also treated people with psychological ailments like be – polar disease, depression, anxiety, OCD. And physical ailments like diabetes, hypertension, asthma, PCOD, thyroid and other ailments. People go to her for individual and group training which she conducts in her apartment at Hat Hill-Mangaluru. Guru Devika is indeed a big blessing to the world and to Mangalore in particular.

Well deserved report and cover-up.
I appreciate the writer ,Mr Alfie Dsouza for his excellent writing skills and complete coverage.
Guru Devika you have down great service to this land. With your training may every
one grow healthier and happier i the days ti come.