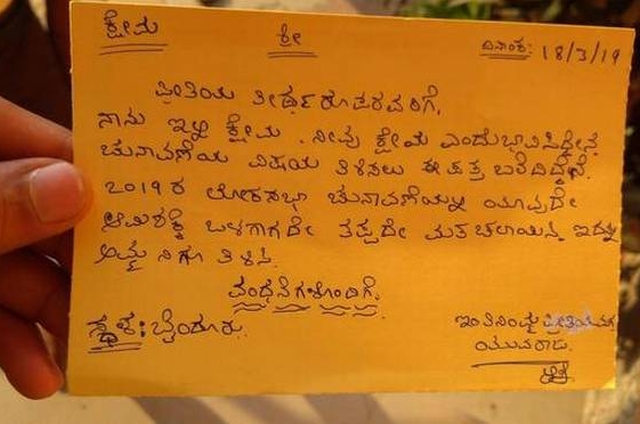 Udupi: ‘Mother, father, please cast your votes in the parliamentary polls without fail. Do not fall prey to any enticements…’ this is how students in pre-matric and post-matric hostels in Udupi district are writing on postcards to their parents and encouraging them to vote.

The students are participating in the drive to create voter awareness not just among their parents but also their relatives through postcards. The District Systematic Voters’ Education and Electoral Participation (SVEEP) Committee is providing postcards to these students to write. The students could write any number of postcards and they had to provide these postcards to the hostel wardens, who then took it to the post offices and posted them.

There are about 5,000 students studying in a total of 61 hostels under the ITDP and Departments of Social Welfare and Backward Classes in the district. “Besides encouraging students to write to their parents to cast votes, the post-matric students are being administered an oath to cast their votes. We are also giving demonstrations of functioning of the Electronic Voting Machines (EVMs) and Voter Verifiable Paper Audit Trail (VVPAT)” said Sankappa R. Lamani, Backward Classes Development Officer.

“The culture of writing letters is declining in the present-day electronic era. But the affection that is reflected in writing letters cannot be found in any electronic device. Parents will surely treasure the words written by their children and respond to their plea to vote,” said Sindhu B. Rupesh, CEO of Zilla Panchayat and President of District SVEEP Committee. The SVEEP Committee would take up more programmes to increase voter turnout and create awareness about voting among the voters in the district, Ms. Rupesh said.