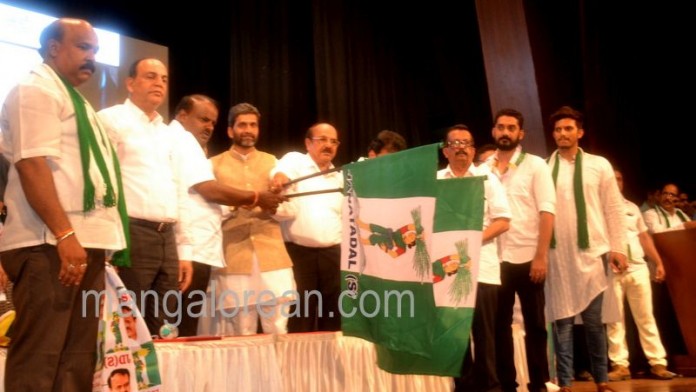 Mangaluru: It may come as a big surprise to Mangaloreans and Congress Supporters, and at the same time it could be a Big blow to the local Congress Party, to note that Former Mangaluru City Mayor and veteran Congressman from the district and vice president of minority cell of the party, K Ashraf, was inducted into JD(S) during a ceremony held at Town Hall- Mangaluru on Tuesday, 6 March 2018-in the presence of state JD(S) president, H D Kumaraswamy, state general secretary of the party-B M Farooq, among many other JD (S) party leaders seated on the dais.

Sources reveal that earlier in the days, discussions were held with JD(S) supremo, H D Deve Gowda, Kumaraswamy, B M Farooq, and other top leaders in JD (S) fraternity, and during the interaction Ashraf had put forth some pre-conditions for his joining JD(S), like nominating him as a Candidate from Mangaluru City (South) constituency (guess against MLA J R Lobo)- and if the JD(S) committee agreed to his demands, then he should surely join the party. Looks like his demands have been accepted- and this evening he was officially inducted into JD(S) party, amidst loud applauds from his supporters who had thronged the Townhall. Many other people had come forward to join JD(S), among them was also Ramesh Shilpa, who had held a distinguished post in the BJP led Central government- they were all welcomed into the JD(S) party by Kumaraswamy.

K Ashraf, who had been with the Congress Party since the last three decades, happens to be a three-time corporator and once served as Mayor of Mangaluru City. Later he resigned from his post when working as city block president of the party due to some misunderstandings inside the party. Ashraf, who aired his unhappiness about certain developments in the party thereafter, had been offered the post of the state vice president of party’s minority unit last year. BM Farooq who spoke during today’s programme said that K Ashraf has made the right decision to join JD(S) after being very much hurt by the Congress leaders – and that JD(S) welcomes him whole-heartily and will support him in the forthcoming elections.

Kumaraswamy addressing the gathering said, “Just look behind this Town hall-the BJP has organized a ‘Jana Suraksha Yatra’ which is a joke and nothing but fooling people. Both BJP and Congress are misguiding the people with statements on religion and community since the elections are approaching. They should speak about development in the state, and not religion and Suraksha. BJP and Congress have done nothing when it comes to development, instead, they are the main sources of communal violence in this region. They are playing politics in the name of religion and communal polarization. BJP has invited a CM from UP to speak on Suraksha when he himself could not protect infants in his state. What a joke? CM Yogi, who was not able to save a bunch of children who were admitted to hospitals in his state, then how can he give protection to the people of this coastal region?”.

“People of Coastal Karnataka are not uneducated, they are all intellectuals. They know who is the right person with the knowledge and capacities to head this state. They need to be cautious with all these fake politicians who talk crap. Even though CM Siddaramaiah has said that he doesn’t need our support in this election, we are not begging him, instead, we will field our own hardworking and experienced candidates and will fight in this election, with a big win. We will prove our might and strength and people will then know what JD(S) is. I am overwhelmed with all bunch of people joining our party, including K Ashraf and Ramesh Shilpa. Welcome to our party, let us all make a difference in the state, for the benefit of the farmers in particular and the rest of the people in the state in general,” added Kumaraswamy.

Addressing the audience K Ashraf said, “I and my family have remained loyal to Congress for decades, but lately I have been disillusioned by a few party members. Few steps taken by party leaders recently have pained him. People who have been serving the party since long are being sidelined and newcomers are getting plum posts. An effort had also been made to snub me in the party through a conspiracy. Enough is enough by these Congress leaders, I have now taken a bold step and happy to join the JD(S) party. I have a huge backing of my supporters, and I also ask support from every one of you to put me on top in the forthcoming elections”.

JD(S) state general secretary B M Farooq. former MLA Amarnath Shetty, Ashwin Pereira from Moodbidri JD(S) constituency, Rauf Puthige, Mohammed Kunhi, M Sadashiva and  District JD(S) president Akshith Suvarna were among many other JD(S) leaders present on the dais. Sources reveal that JD(S), which has failed to establish itself as a strong contender in DK district, is determined to make an impact this time. It is trying hard to field their candidates in Mangaluru City (South), Moodbidri, Puttur and Sullia assembly constituencies.