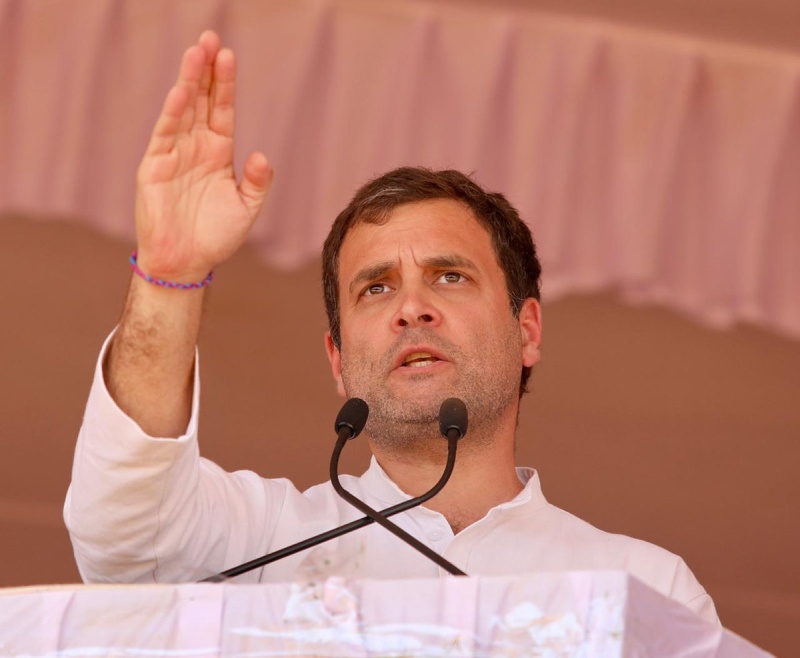 As India is in the throes of its 2019 general election, the mood of discontent in the current social, economic and political climate across the nation is seeing Prime Minister Narendra Modi’s Hindu Nationalist Bharatiya Janata Party (BJP) on the brink of collapse.

A significant majority of the electorate is voting for the Government’s leading Opposition party, the Indian National Congress (INC), whose leader, 48-year-old Rahul Gandhi, is witnessing a remarkable surge in popularity.

Gandhi’s politics of unity, inclusiveness and clear manifesto to tackle the issues facing India, starkly contrast to those of the BJP, whose five-year office term has been marked by aggressive majoritarianism and economic decline.

A Congress Party landslide in the general election, the result of which will be announced on May 23, is the finding of a survey compiled by a UK-based research group that polled 20,500 people out of whom 52% were male and 48% female, across 24 states in India, weighted to represent the total voting population.

After having looked at the research as a journalist, I am fascinated by the Congress Party’s rising popularity and at the same time alarmed by the anxieties the people of India have with the current political status quo.

The survey also asked 20,500 participants from the age of 18 and upwards what they felt was the most important issue to them.

The rising cost of living, increasing unemployment, demonetisation and farmer’s issues were found to be the four most pressing issues for the Indians polled. Education, healthcare and housing, as well as rising petrol prices, transportation, minimum income support and the treatment of minorities (Castes), were other leading grievances with the current ruling government, the survey found.

In the years following Modi’s government landslide victory in the 2014 elections, when the BJP gained 282 seats compared to the Congress Party’s meagre 44, the country’s economy has been underperforming.

Unemployment has been rising in India, a far cry from Narendra Modi’s promise to create jobs for millions of Indians when he came into power. Despite the government’s controversial delay in releasing unemployment figures from 2017–2018, the data was leaked to the media indicating that unemployment had risen to 6.1% and now stands at a four-decade high.

The nation’s farms are beleaguered in a low crop price crisis. Record high fuel prices and surging fertiliser costs, alongside falling prices for produce, are deepening the farm crisis in India.

In 2014, farmers voted overwhelmingly for the BJP. Five years on, the mood among farmers is strikingly different.

The Indian Prime Minister’s sudden demonetisation decision in 2016, which made the major currencies in circulation in the economy invalid, which was quickly followed by a sweeping new sales tax, heightened India’s economic crisis along with rising levels of unemployment.

Pointing the finger of blame at Modi, Himanshu, an Economics professor at Jawaharlal Nehru University, succinctly summed up the mood in India towards the BJP, saying:

This toxic climate of discontent and contempt towards the ruling party and its policies, is paving the way for change in India and the electorate seems to be buying into the alternative offered by Gandhi’s National Congress Party.

Unlike Modi’s BJP, which vilifies Muslims in order to forge a Hindu vote, Gandhi’s message is largely secular and is centred on unity and inclusion.

The government’s control of the mainstream press is also aiding the climate of resentment in India. It’s no secret that India’s media largely works in favour of the BJP. The Diplomatic describes the government control of the country’s media as “sinister”, noting:

“Control over the nation’s press is an attempt to promote a Hindu nationalist, or Hindutva, agenda across all of India’s institutions. It is also an attempt to hegemonize its communal narrative in an officially secular country with a large Hindu majority.”

The Congress party’s policy is focused on helping the poor, farmers and the jobless who are particularly feeling the brunt of India’s economic crisis in the first instance.

One such policy is the Congress’ minimum income guarantee (NYAY), which will provide the poorest 20% of the population — approximately 50 million families — with income support of ₹6000 (approximately $87) every month. It is believed that “reducing the existing subsidies that primarily go to the rich and middle classes” will in part fund the proposed NYAY initiative.

The BJP has not held back in making national security measures a key focus of its election campaign and manifesto. The Congress Party promises to review what the New York Times describes as a: ”draconian security legislation.”

Despite testimony of the Congress Party’s surging popularity among the people of India, Gandhi and Congress’ pursuit to power won’t be a ‘walk in the park’, due to the level of institutional control the leading party exerts.

As well as the mainstream media being largely under BJP control, other key pillars of India’s democratic institutions are seen as under threat of government-controlled subversion, including the Supreme Court and the Reserve Bank of India (RBI).

In January 2019, four Supreme Court judges took the unprecedented step of holding a press conference to voice their concern that the then Chief Justice of India was allegedly distributing cases to suit the Modi government.

Posing a further threat to the demise of India’s democratic institutions and in another seemingly strategic effort to quash the opposition’s right to a free and fair election, the BJP is exerting undue influence over the Election Commission who has so far been seen to show bias in favour of the ruling party.

Fears are also being voiced about the integrity of the Electronic Voting Machines, with stories emerging about the machines being hacked into and ballots rigged.

India’s growing fondness for the young, peace-loving Rahul Gandhi’s, whose honesty, transparency and secularism offers a refreshing alternative to the current political climate of draconian control and aggressive Hindu nationalism, is creating a groundswell of support for the Congress Party.

Armed with ambitious plans to restore ‘the soul of India’ and encourage a more inclusive, accepting and peaceable society, Rahul Gandhi and the Congress party, as the survey shows, is sat firmly in the driving seat to unseat Prime Minister Narendra Modi and his right-wing Hindu nationalist Bharatiya Janata Party.

Voting in India’s election began on April 11, and will take place in 7 phases, with the final phase on May 19. Results will be declared on May 23.

Totally untrue. BJP has better ideas to take India forward to the future, unlike Congress. Congress has got nothing in its election manifesto. All they have is to shout Modi’s name 1000’s a day. I would have considered Rahul Gandhi as an opponent had he come up with greater ideas to lead India. Rather he wasted his time beating around the same bush, nothing but the Rafael deal. It is highly unfortunate that Congress just wasted all the precious time it had to convince people.