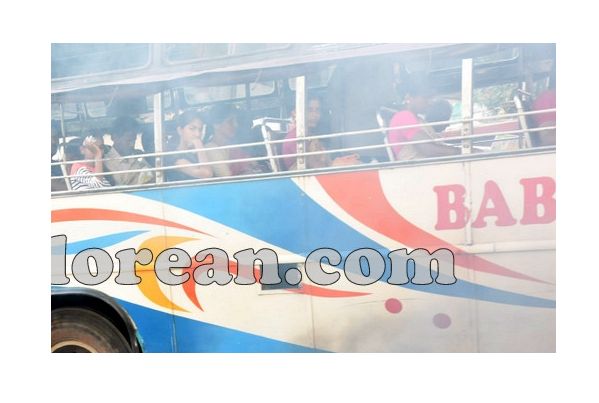 I was seated in the front seat of the bus on my way to the office when I saw a group of four children, all of them probably below 10 years of age and in school uniform, boarding the bus and climbing onto the bonnet next to the driver. No sooner had they settled down comfortably in that small space they got into a very animated conversation with one another. One girl took a red coloured umbrella out of her school bag and showed it to the boy in front of her with a lot of excitement and he seemed equally delighted at the sight of it. Then, they shared something with the driver – I could not see if it was a small toy or something to eat. All the while I was amazed at what was happening in that small group of four children and the driver. The bus was full of people but my eyes were glued to them, oblivious of everything around me. Not that I was seeing little children for the first time, not even a red umbrella, but the bonhomie that they were sharing with one another and the driver who was enjoying their company even as he was driving the crowded bus, made my day.

That incident taught me a lot. I saw how freely they trusted one another, even if it was for a brief period. The children connected so well amongst themselves and the otherwise busy driver, without speaking a word – for they were hearing- and speech-impaired. I felt compelled to reflect on how much we think before we talk to or smile at someone.

When I was in primary school and accompanied my mother on various trips by local bus, I used to start chatting with anyone and everyone, not sparing even the driver and conductor of the bus. Those days, people used to be very free to talk and be talked to, without any apprehension. Not these days, when we are very cautious to talk to a stranger or when someone tries to strike a conversation with us. Near home, many of us don’t know who our neighbours are. What irony! I know colleagues who have sent me friend request in social media, while they don’t take the time to even smile when we pass by at the workplace. Funny but sad, isn’t it?

Back to the children, I still remember the twinkle in the eyes of the girl and the joy on their faces. They were all enamored by a simple red umbrella. Nothing else mattered – their inability to speak to or hear each other, the rain outside, or the discomfort of sitting cramped on the bonnet.

Fortunately, children going to the ordinary schools still find time to play together, as they are not caught by the ‘mobile phone fever’, or bogged down by the innumerable ‘projects’ that are given to their peers in the so-called elite schools. Children should be encouraged to interact with people of all ages, of course within certain boundaries if need be. That alone can build into the child the confidence to face anyone, when they enter the real world as adults. No course on personality development can help in the advanced years if the child has not stepped outside the comfort zone of his home.

Each day, on my commute to the office, I see adults and children alike, engrossed in their smartphones of all kinds and sizes, absolutely lost in the online world. This is prevalent even when people are pillion riding with another, irrespective of the fact that awareness of one’s surroundings is of paramount importance for safety on roads.

I remember how, long before the mobile phones came, I was once seriously reading a book in the bus, when an elderly woman tapped on my shoulder and politely advised me to look around, observe the surroundings, people, animals and whatever else I could see and not get stuck to the book the way I was. I am glad she made the effort to correct me.

What struck me the most about the children was that they lived in the moment. They had fun, laughed, ‘spoke’ to each other in sign language, all without any fuss, while most of us hesitate to show our emotions, be it joy, sorrow, or excitement, when we are in the midst of people. Many of us even lead our life hiding behind an invisible mask, always afraid of what others might think or say about us.

My bus commute with the bubbly children, ended in sometime but they and their red umbrella remain vividly memorable to me, and I pray to be blessed with the simplicity that I saw in those children, to be able to revel in simple joys, the red umbrellas, in the midst of the busyness of our life.

I, to start with, actually talk with whoever I can instead of chatting on phone, laugh freely instead of watching canned laughter in comedy videos, share small eats with co-passengers or even the bus crew, because I want to live meaningfully not merely exist. And I look forward to seeing more people around me doing just that.