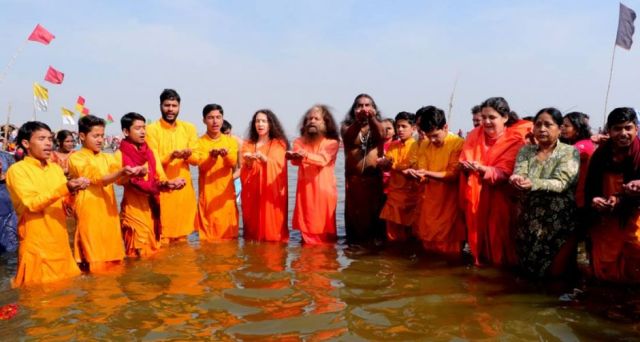 Since early morning the devotees were seen congregating at Tattapani, 55 km from the state capital, and Manikaran, home to a Sikh shrine in Kullu district, for holy dips in the Satluj and Parvati rivers respectively, officials said.

Tattapani and Manikaran are known for hot water springs with high sulphur concentration.

The natural and prominent hot springs, which disappeared after the construction of the 800 MW Koldam hydroelectric power project executed by the National Thermal Power Corporation (NTPC) along the Satluj in Tattapani, have been restored. Its reservoir had submerged the hot springs.

The devotees also visited Vashist temple, located on the outskirts of the popular tourist resort Manali.

The temple is situated on the left bank of Beas river, also known for its hot springs.

“This time the rush of the devotees is less compared to the previous year owing to inclement weather,” Shimla resident Mohit Sood told IANS over phone from Tattapani.

To establish Tattapani on the world tourism map, the Department of Tourism and Civil Aviation for the first time prepared ‘khichdi’ of more than 1,100 kg in a single vessel for 10,000 people.

Makar Sankranti is a major harvest festival celebrated in various parts of the country.

It also marks the beginning of warmer and longer days compared to the nights.