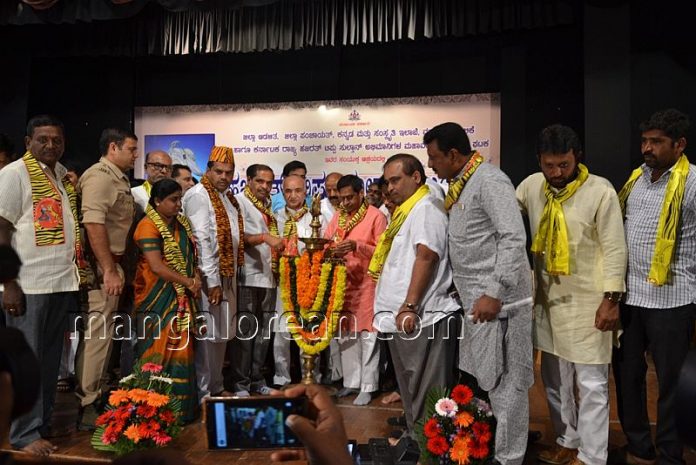 The programme began at 11:00 am with an invocation. Dr Lokesh DC Shivamogga Dist. welcomed the gathering and spoke about Tipu’s important work towards people and greatness of his community service, be gave examples of the good work done by Tipu without any religious barrier.
MLA K B Prasanna Kumar inaugurated the programme by lighting the traditional lamp along with other dignitaries on the dais. A booklet on Tipu Sultan was released on the occasion by him.

Addressing the gathering MLA K B Prasanna Kumar said, “Today we are celebrating the birth anniversary of Tipu Sultan. The government is remembering the Ruler of Mysuru. When a person does good work we should remember and respect him. We need to give importance to brotherhood and harmony. Tipu ruled Mysuru with good governance. Whatever good is written in history and whatever good Tipu had done we should remember it”.
Addressing the gathering, Prasanna Kumar said, “Tipu Sultan fought against the British at the age of 15. History cannot be twisted.

After the government decided to celebrate Tipu Jayanti the opposition started to criticise us. The opposition says that Tipu was anti-Hindu, Tipu had converted people, Tipu was communal etc. Tipu Sultan had created history but people tried to spoil his name. Tipu Sultan sacrificed his entire family for the freedom of this country. Those who are not interested to celebrate Tipu Jayanti they should stay away from the celebrations.
Some people had dressed like Tipu Sultan and clicked photos praising him, but now the same people are trying to twist the history of Tipu. If we want to build a strong nation we should not forget the freedom fighters. We must respect historians and whatever they have written about Tipu Sultan”.

There was a special talk on Tipu Sultan by Dr S Timmayya Rtd. Principal Shivamogga, he gave examples of various projects which we do at present were introduced by Tipu, Developmental work of Nanjanagud Temple Sringeri Math, Sreerangpatna Temple was done by Tippu. And the very important project compulsory Education system was introduced by him. The first Missile system executed in India was by Tippu Sultan.

Why has Tipu Jayanti become so important suddenly? Is it not a way of polarising the electorate?