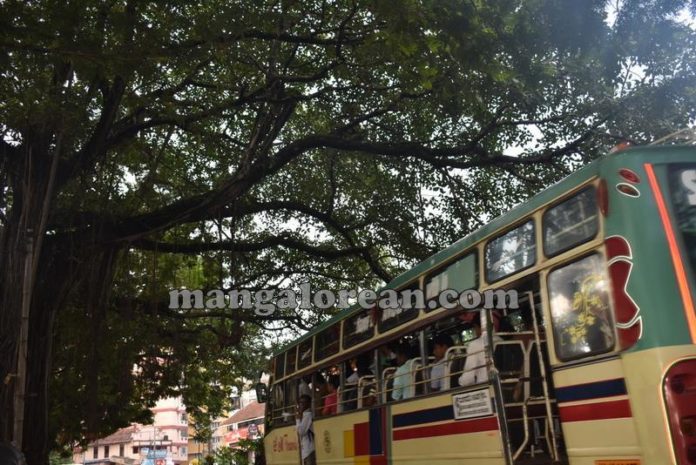 Tree Planting is Good, but MCC should Take Care of the Falling Old Trees FIRST?

Mangaluru : Looking at the video that had gone viral, where a tree comes down crashing damaging a bunch of vehicles and injuring a few in Manipal, made me to write this article, because if you go around the Smart City – Mangaluru, it definitely doesn’t look Smart having a bunch of old tress which are in the verge of falling down, any time. I am not against having trees in the City which are good for the environment, but I am against having decades old trees having branches spread over the busy roads, which may break and fall anytime on moving vehicles or people, during a hail storm or heavy winds. And for that matter, no one has given any attention to this safety hazard. 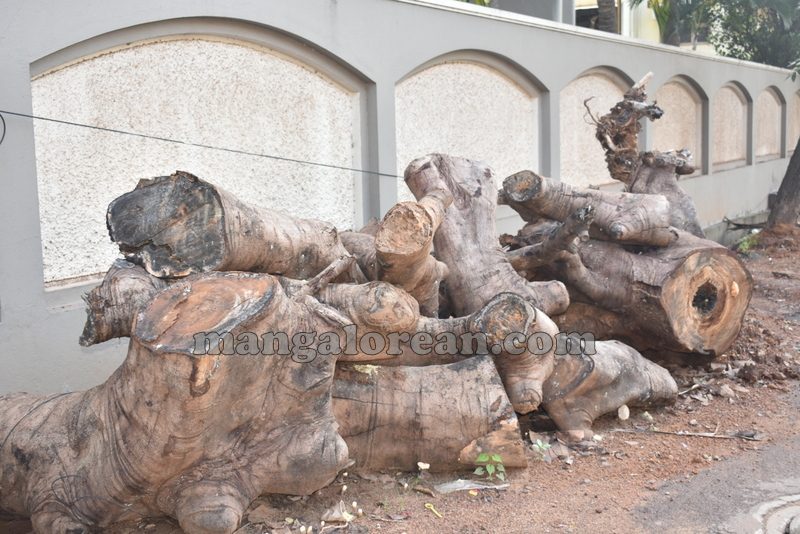 In spite of falling tree branches and also trees getting uprooted and causing heavy damage to buildings, property, vehicles, and also injuring commuters, the district authorities and MCC Officials have not taken any action in trimming branches or chopping down old hazardous trees. In the past few days, after the city was lashed with torrential rains, with gusty winds, there have been quite a few incidents of trees being uprooted or branches landing on building/homes.vehicles and people. Even though no lives were lost or any serious injuries occurred, but there had been damages to property and vehicles

They say that the main reason for tree fall is: Without daily care, trees get diseased, the trunks become hollow, and roots weak, which results in the trees becoming top-heavy and easily cracking or getting uprooted during heavy winds, and thunderstorms. With thunderstorms that had seen a few trees/branches falling, which the city experienced in the past could well have taught Mangaloreans something: While ‘Plant more trees’ is a well-intended call, ‘take care of the ones standing’ would be more apt and important. Many people think trees can grow by themselves and do not require daily maintenance. That’s not true. Every tree should be watered daily – from the oldest to youngest. The city’s planning only looks for infrastructure but forgets the trees. 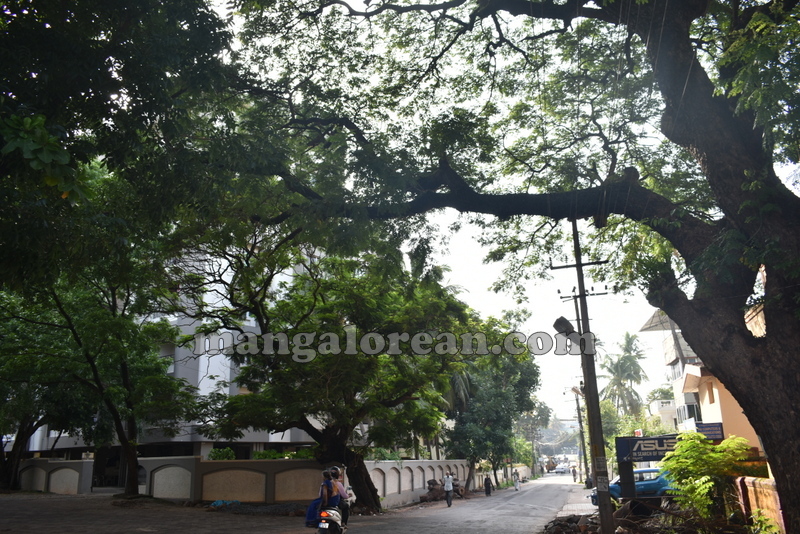 Infrastructure is planned depending on where it has to come. Similarly, even trees should be taken into consideration. We need more tree parks like we have inn Kadri Park, and in that vicinity- and these trees there will not fall because they have been planted with proper scientific techniques and the parks are maintained and the trees watered daily. This apart, the ones who carry out tree plantation drives also should plant trees in the right places and take care of them every day. But if you go around the city, you’ll notice that most trees which have existed for decades are becoming cancerous. Also that in order to advertise, people drill thousands of nails in trees. This kills trees. The tree is injured in the part where the nail is drilled, fungus sets inside the tree trunk, which then begins to get hollow and weak, making it easier to get uprooted. The fault was man-made, and such trees need to be checked and cut before they fall, posing danger to man, machine and property.

Yet another reason is of laying underground optic fibre cables, because the cables laid below ground make it difficult for tree roots to again grow strong. Also water content reduction was putting the lives of trees at stake. Due to asphalting and cementing of roads, the water is not seeping through the ground and so the trees are not getting enough water. The major reason for weak trees is Mangaluru City Coprporation making cement pavements which choke the bottom of the tree; there is no root respiration, thus making roots weak and enabling the trees to get easily uprooted. Krishnappa, a environmentalist said that tree census should be the priority-from the girth to the height to the age of the tree, everything is noted during the tree census. But the census has been put on hold. Rules should be brought in to ban the cementing around the trees. 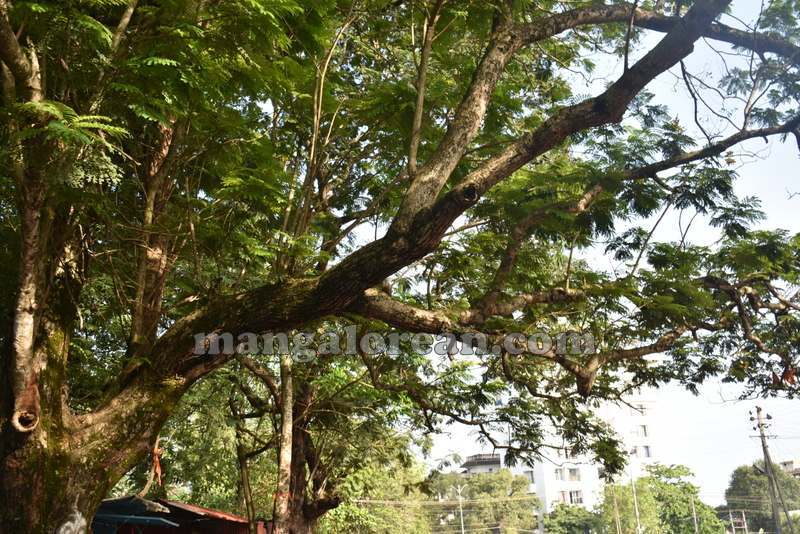 “One of the reasons for the trees getting uprooted is development, wherein the trees do not get sufficient moisture and water content has reduced in the root system. We found that their root systems had completely weakened. Native tree species that could save the city are: Neem, Honge, Champaka, Nerale, Saraka Indika (Ashoka tree), Anthocephalus Kadamba, Ficus, Audambar, Pongame Oil, Indian bael, Pongamia, Nerale, and Banyan” added Krishnappa. Former MCC Mayors had promised to take care of the trees which pose danger to motorists and pedestrians, but it seems like it was just talk and promises- because if you look around the city there are quite a few trees which are on the verge of tumbling down. 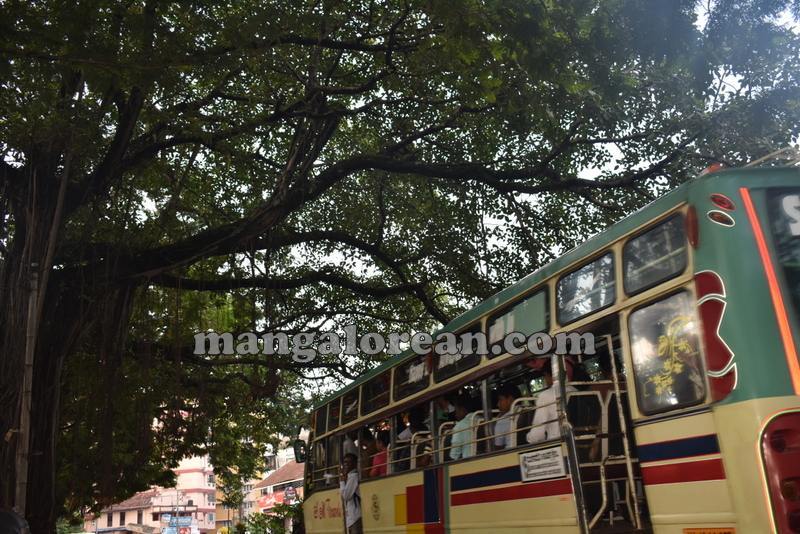 There are a few slanting trees on the NH 66 near Nanthoor Junction and few of them on the Nanthoor-Kadri Chef stretch which may anytime collapse. The slanting trees look most dangerous as they have grown old and now due to heavy rain or wind breeze they may fall to the road at anytime. Many of these tress are leaning/slanting on to the road precariously, and look very fragile and threatening, while some of infected trees may also be destroying the roots. Couple of these trees have their roots protruding out of the soil, and they may be uprooted anytime, and fall right on middle of the road. 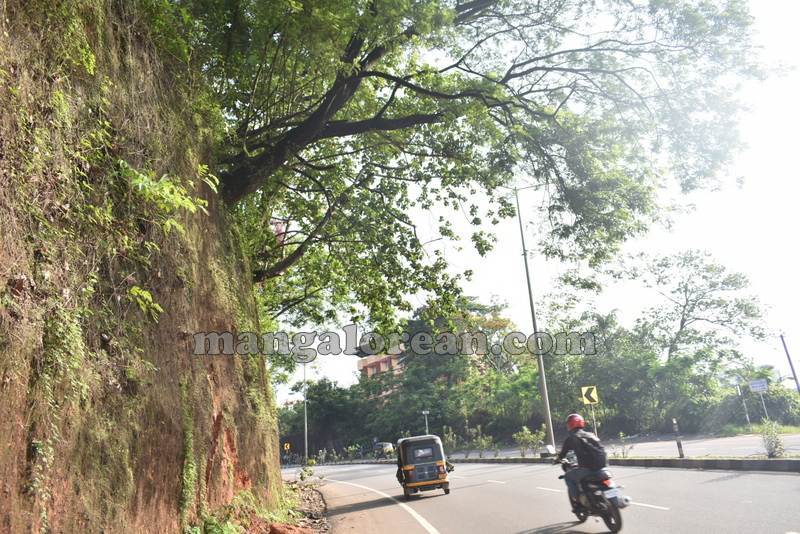 In the past during monsoons, scores of old trees fell all over the city following strong gales, resulting in damages to vehicles and property. Most of the trees had no room for their roots to spread out and this led to gradual decay. In other cases, growing trees had their branches cut regularly on one side, because they leaned on to private property; the trees grew up lopsided and leaned far on to the roads. This means their remaining branches too were regularly being trimmed and they lost strength. The concerned authorities are expected to monitor a city-wide “tree census” to determine how many trees are really a danger to traffic or at risk of falling down during heavy rain and strong winds. Trees which are unable to bear the air pollution and decaying should also be identified. But seems like no one is doing their job right- and as a result we have trees come crashing down on vehicles etc now and then.

The problem with our MCC authorities is that they wait till the trees fall, and then only take action–like many trees had fallen due to rains. The safety of pedestrians and of all road users should be the first and most important priority for National Highway authorities and also local authorities and also for a State body that has responsibility in this area. Some of these trees may have disease, which is a clear indication of root rot. Through this report Team Mangalorean is asking as a matter of urgency that these old trees are inspected and that those that appear in any way dubious should be promptly removed, or at least their branches trimmed before they crash down resulting in injuries or death to motorists or pedestrians. Thank You