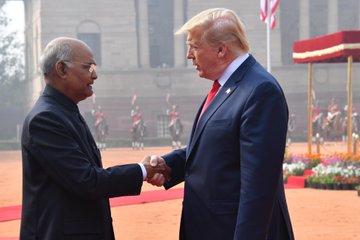 New Delhi: President Ram Nath Kovind on Tuesday hosted a banquet in honour of visiting US President Donald Trump and First Lady Melania Trump and attended by Prime Minister Narendra Modi and his cabinet colleagues, and other dignitaries from both sides.

Welcoming the US President, Kovind said: “President Trump’s participation in the ‘Howdy, Modi!’ event had already won the hearts of millions of Indians. The ‘Namaste Trump’ has brought him even closer to our people. It is the first time that an event of such scale was held in India to welcome a foreign leader.

“It shows the goodwill and respect that the people of India have for the US and for President Trump.”

Terming Trump a valued friend of India, he said that India “appreciates the progress in India-US relations in his term in office, the US as a long-term friend and a natural partner”.

“Our strong democratic credentials bind us together. Continued economic prosperity and geo-political leadership of the US is in India’s interest. Similarly, India’s growing political, economic and military footprint will be beneficial for US interests in the region as well as globally,” he said.

Noting India is currently undergoing change from an agriculture-based economy to a more manufacturing and services-oriented economy, Kovind said: “In this transition, we need the support and understanding of our friends and partners. We feel that the US being our leading economic partner is uniquely placed to support our growth and development as well as benefit from its expansion.”

He also said that as the world’s largest democracies, the India and the US “are deeply connected with each other through our people and their aspirations”.