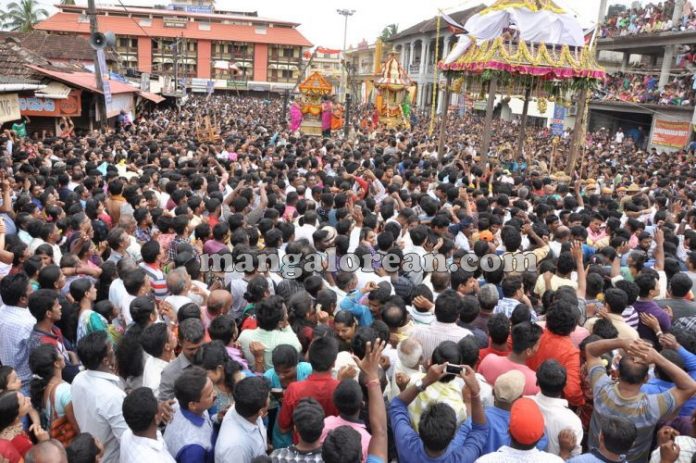 The procession started from the entrance of the Sri Krishna Temple. Vishwesha Tirtha Swami of Paryaya Pejawar Math installed a clay idol, ‘Utsava Murthy’, of Lord Krishna on the top of the golden chariot.

The idols of Lord Ananteshwara and Lord Chandramouleshwara were placed in the ‘Navaratna Ratha’ ahead of the golden chariot.

These chariots were pulled around Car Street with traditional drum beaters and ‘Huli Vesha’ dancers accompanying them. There were a large number of people behind and in front of the chariots.

The procession was led by the ‘Huli Vesha’ (tiger dance) and other cultural tableaux. Swamijis gave away coconuts, fruits, eatables like laddoos and coins as ‘Prasadam’ to the huge crowd assembled at Car Street to witness the events.

The occasion also marked the breaking of pots filled with milk and saffron, which signified the childhood plays of Lord Sri Krishna. The ritual was held in front of the clay idol of the Lord during the procession. The ritual was performed with around 12 to 15 pots filled with curd, milk and saffron water and tied one after the other to the poles erected for the purpose. This was broken by the men dressed as shepherds using huge bamboo sticks.

The entire Car Street was flooded with people. Several folk and fancy troupes including several ‘tiger dance’ troupes added color to the procession. Police had made elaborate security arrangements in the city for the smooth conduct of the event.

After going around the Car Street, the procession culminated at the entrance of the Sri Krishna Math. The clay idol of Lord Krishna was removed from the golden chariot and taken in a golden palanquin and immersed in the Madhwa Sarovara, marking the culmination of the festival.