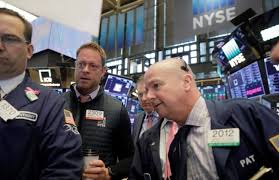 US stocks trade higher ahead of Trump’s speech

Trump is scheduled to speak at noon at the Economic Club of New York. Investors are looking for clues to the progress of China-US trade talks.

US equities rallied to record highs recently, pushed up by trade optimism.

A majority of the 30 blue-chip stocks in the Dow traded higher with shares of Walt Disney and Merck & Co up 1.61 per cent and 1.45 per cent, respectively, being the top two gainers.

Nine of the 11 primary S&P 500 sectors traded higher with the health sector up 0.73 per cent, leading the gainers.