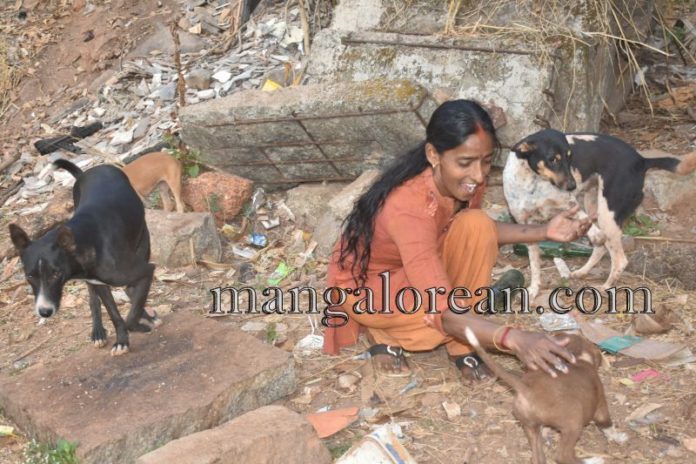 When No One Cares for Them, Ms Rajani Shetty Feeds Hundreds of Stray Dogs Daily during Lock Down

Mangaluru: With a rising number of positive coronavirus cases, several parts of India have gone into lock-down, including Mangaluru. And while humans have been finding myriad ways to deal with the lock down, stray animals have ended up becoming an unforeseen casualty of the lock down. Thousands of stray dogs in our city depend on daily markets, restaurants and local good Samaritans who feed strays. But with coronavirus sending people into isolation and public establishments shutting down, strays have a hard time finding food. These strays are starving with no one serving them, since restaurants and other eateries are closed. But sadly, 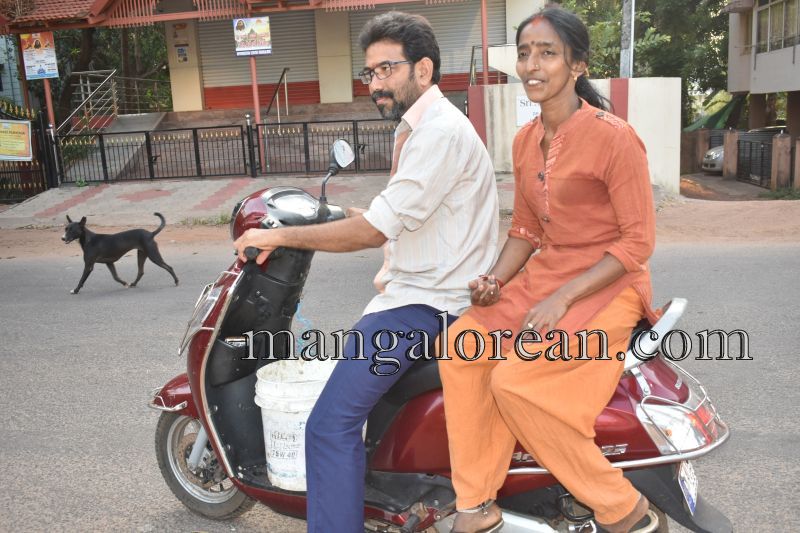 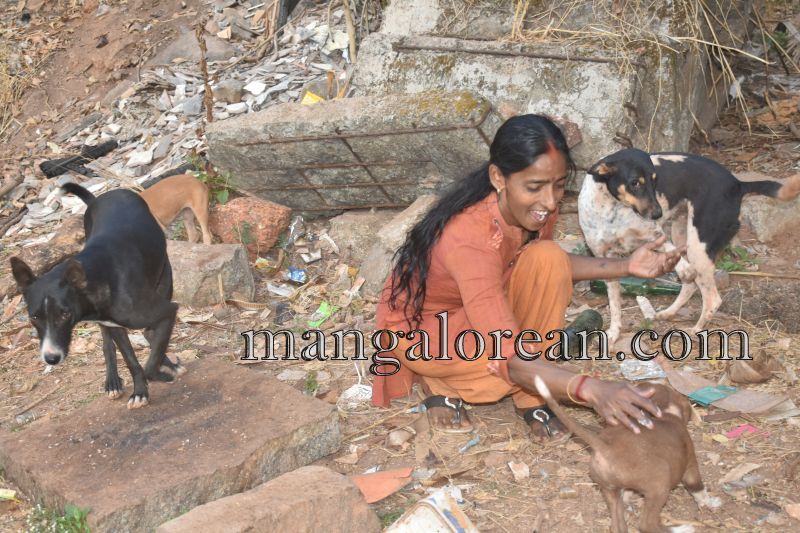 And when such is the present situation in Mangaluru, it would be a good gesture from Mangaloreans to feed as many strays as possible in their areas and whenever possible to help the animals survive. And you should know that Street dogs, cows, and birds can neither get nor give coronavirus to humans. However, in the event of a lock down, if they are not fed, many will die, creating another kind of a problem. There should be many animal lovers in Mangaluru, and therefore, it is the need of the hour that at least you all come forward and feed these hungry four-legged, and also the beggars, if you come across. Looking at these stray dogs, they look weak, with sad faces and eyes- but they have been totally neglected by the Govt veterinary dept or by the district administration. 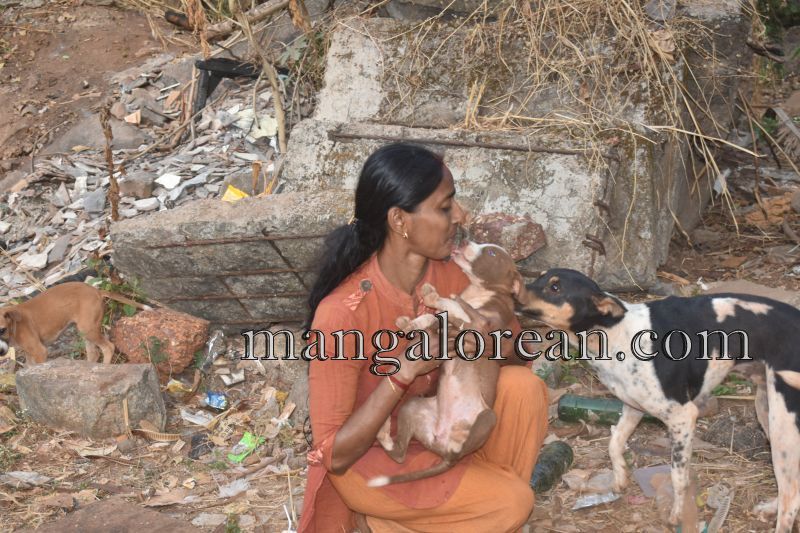 Just like we humans need our daily essentials, the district administration should allot times for designated workers or volunteers to provide food and water to strays since it is also an “essential service”. They should also run awareness campaigns for the public to adopt feeding street animals in such kind of lock down. Law enforcement agencies may also be directed to see that animals do not suffer due to hunger during the COVID-19 lock-down. But unfortunately it seems like it has not been done. Following an article that was published in Mangalorean.com on 25 March, ( With all this Prolonged Lock Down, Beggars & Stray Dogs in City will NOT Die of Covid-19 but of Starvation? ), and in that report Team Mangalorean had kindly requested our readers and their relatives and friends, to come forward and feed the stray animals, especially dogs, so that they wont suffer out of starvation. 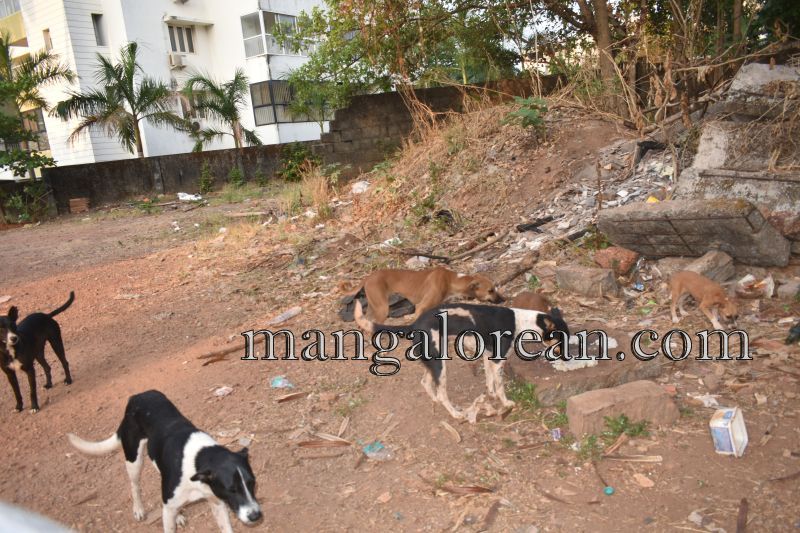 And within few hours, Team Mangalorean received a call from Animal Lover Ms Rajani Shetty from Doddahithlu, Ballabagh, Mangaluru, that she was ready to feed as many stray dogs as per our request. And this lady is not new to Team Mangalorean, because on 1 February 2020, we had done a report on her (Puppy Love! Daring Animal Lover Ms Rajani Shetty Rescues a Stray Dog Fallen into a City Well ) when she had rescued a stray dog fallen into a well- and that was a daring ‘Animal Rescue’ from this ‘Animal Lover’! Ms Rajani Damaodar Shetty, aged 40, is a TRUE Animal Lover, who finds the company of dogs much more endearing and comforting than the company of fellow human beings. Taking care of these furry friends isn’t new to her, since she has been a Good Samaritan to stray animals for over a decade. ( You can get more info and photos of her pet animals by clicking on the above article link)

All these dogs have become her family. She takes care of the dogs’ every need. She feeds nearly 150-160 stray dogs every night between 12 midnight till 3 am, and if needed, she takes care of all their medical expenditure including vaccinations and treatments. And she bears the expenses all from her own pocket. And her recent daring act of rescuing a stray dog fallen into a open-well, located in the Biruver Kudla ground on 30 January 2020 had made breaking news in print and electronic media, thereby receiving lots of appreciations and applauds from all quarters.

This morning (Thursday, 26 March) at around 7 am, Team Mangalorean followed Ms Rajani and her husband, Damodar, who on their two wheeler with a bucket of rice mixed with chicken, made few stops in the Mannagudda and Urwa areas, and quite a few dogs and puppies were fed, when all these furry four-legged were starving with hunger during the Covid-19 lock down. And last night, between 12 midnight until the wee hours (4 am), she, along with her husband and daughter fed around 200 dogs which were really hungry, since most of the restaurants/eatery joints/meat shops which used to feed them, were all closed due to lock down. From Mannagudda, the husband and wife duo went further into other parts of the City in feeding the stray dogs. And their kind service doesn’t end during the end, because once again, tonight they both are back on the streets feeding 100 plus strays.

Apart from feeding hundreds of stray dogs, she at home feeds 12 dogs ( 11 Female, 1 Male), 15 Cats, 1 fat Hen, Two Eagles, and bunch of fishes. And all these furry and non-furry animals also share the two-bedroom tiled roof house along with home people- just like a “Joint Family?”. Many animal lovers appreciate Rajani’s work, where she has been single-handedly taking care of so many dogs with all the love, dedication, and passion. Many are so moved by her entire persona that they come forward to help her out. Ms Rajani, is always ready to jump into action when she sees or gets a call to rescue a stray animal, day or night.

Yes, during time when many animal cruelty cases are being reported, this woman stands out as a stark contrast. Despite the lack of support, Ms Rajani with her own money, spends on these canines, for their food, medicines and care. She is alone in her battle to rescue these dogs, who are otherwise ignored and left to fend for themselves. She does not have many helping hands in her endeavour; her neighbours constantly harasses her because of this initiative and the only other people who help her out in her efforts, is her beloved Husband, and her three children. 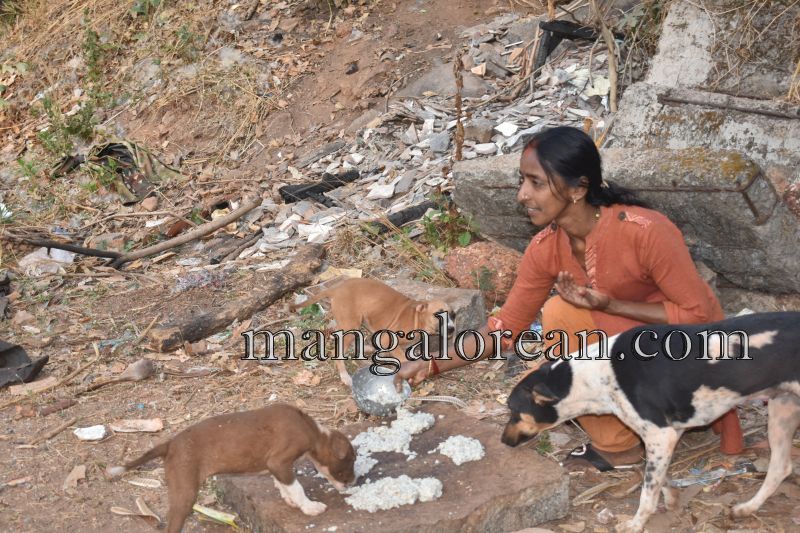 Her husband, Damodar Shetty is a taxi driver, while she is a homemaker at the moment, but occasionally she nurses new born babies and their mothers, when she gets called. Ms Rajani has three children- elder daughter Swetha pursuing her M BA at SDM College, Mangaluru, and a distinction holder, is aspiring for a good paying job; her another daughter, Rithika is in degree class at SDM College, and is quite active in co-curricular activities; and her son, Pratheek, is in 8th Standard. In fact, apart from her college and school going children, most people are dismissive of what she is doing. Ms Rajani doesn’t care what people or neighbours say, she keeps her love and care for stray dogs going, while she has full support from her husband and kids. 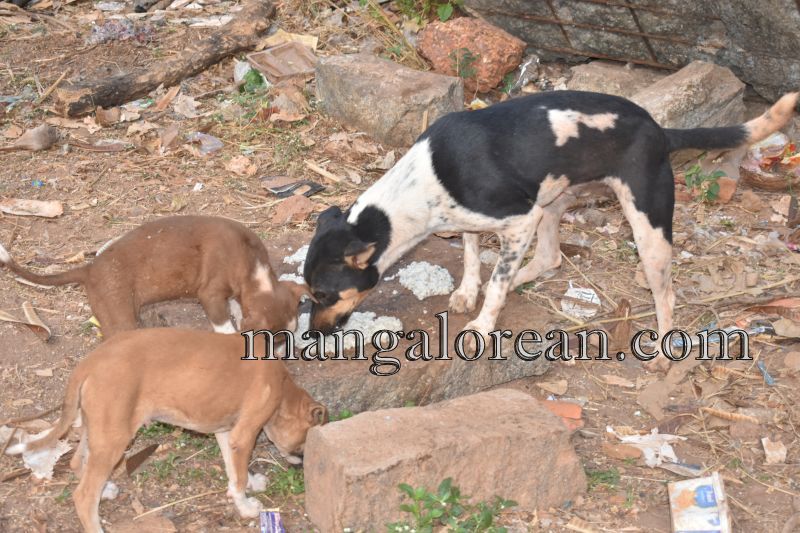 Every day, she cooks around 8-9 kg rice in a big aluminum vessel, mixed with chicken waste ( chicken waste donated by two chicken stalls at Urwa and Mannagudda), and every night along with her husband on scooter goes around Mannagudda, Urwa and surrounding vicinity and feeds around 150-160 stray dogs every night, and all expenses borne by her. All these dogs who are dear to her, know the time and her arrival at night- and they all come running towards her, wagging their tails.Ms Rajani’s home comprises of happy family members, including her “Pet Children”. Cats and dogs get along very good, not forgetting to mention the lone fat-chicken named “Gulabi” also getting well the furry ones- and she always has the privilege to lay her eggs on Ms Rajani’s bed.

Even in spite of neighbours harassing and confronting her for what she is doing, but Ms Rajani says she will never stop her love and care for the stray animals no matter even if her neighbours assault her (which has happened quite a few times, she says), and if she sees suffering stray dogs which may need special care, she says that she won’t mind treating yet more dogs with as much love, she has given to her present 12 canines. She even takes care of two eagles which were injured when they came into contact with live electric wires, and now they are in a large cage, since they are unable to fly anymore. Ms Rajani taking care of 12 canines at her home, and around 160 canines at night on the City streets is quite remarkable and commendable. 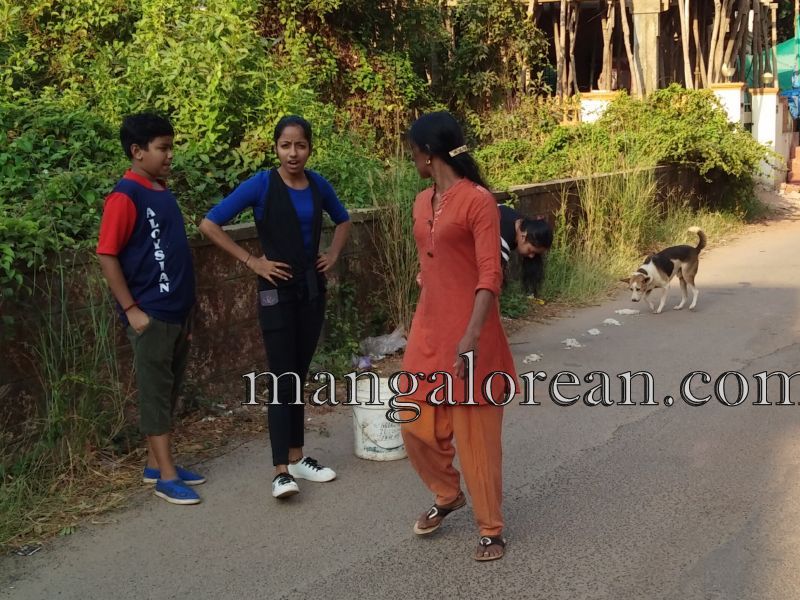 Speaking about her work she does, Ms Rajani said “Just like us, human beings these animals also have lives and they also need to live like we do. When they need someone to love and pet them, we should help out. I feel happy when I save animals, including snakes and other reptiles who are on the verge of dying, that I gave them a new lease of life. Till I am alive, nothing will happen to these stray ones, and I won’t let” she said with the proud air of a matriarch. Ms Rajani has also pledged her organs so save other human lives, after her death-and her children are also planning to follow their “Organ Donor” mother’s footsteps. Her daughter Swetha says that she feels proud what her mother does for stray animals, and someday she too may be like her Mother- a Good Saviour to these neglected animals. 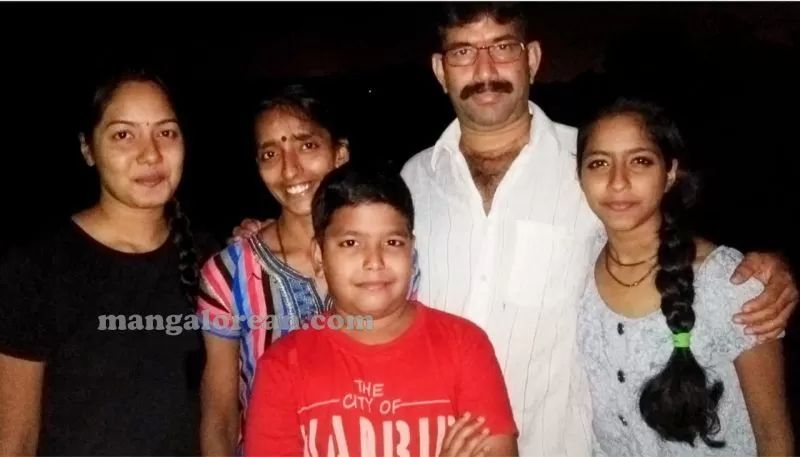 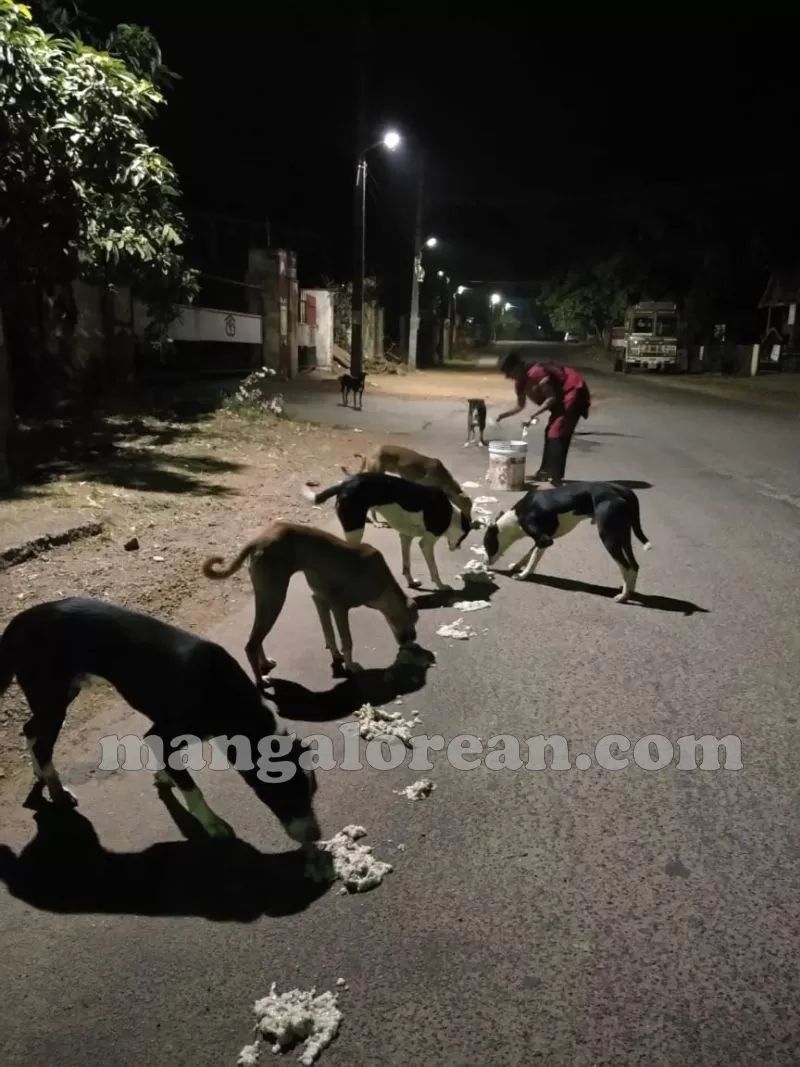 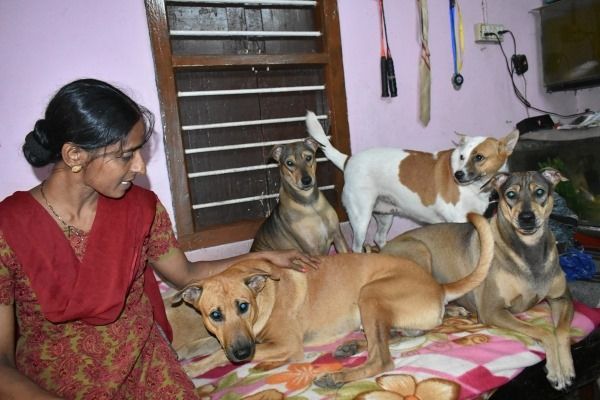 If anyone of our readers would like to help financially or with pet products,and the present expenses she is bearing in feeding more stray dogs during this Covid-19 lock down time, you can contact Ms Rajani Damodar Shetty at 8904563332, 8904563331 or visit her house located in “Doddahithlu”, Ballalbagh, Mangaluru. Please help her save the dying strays during this lock down, Thank You!